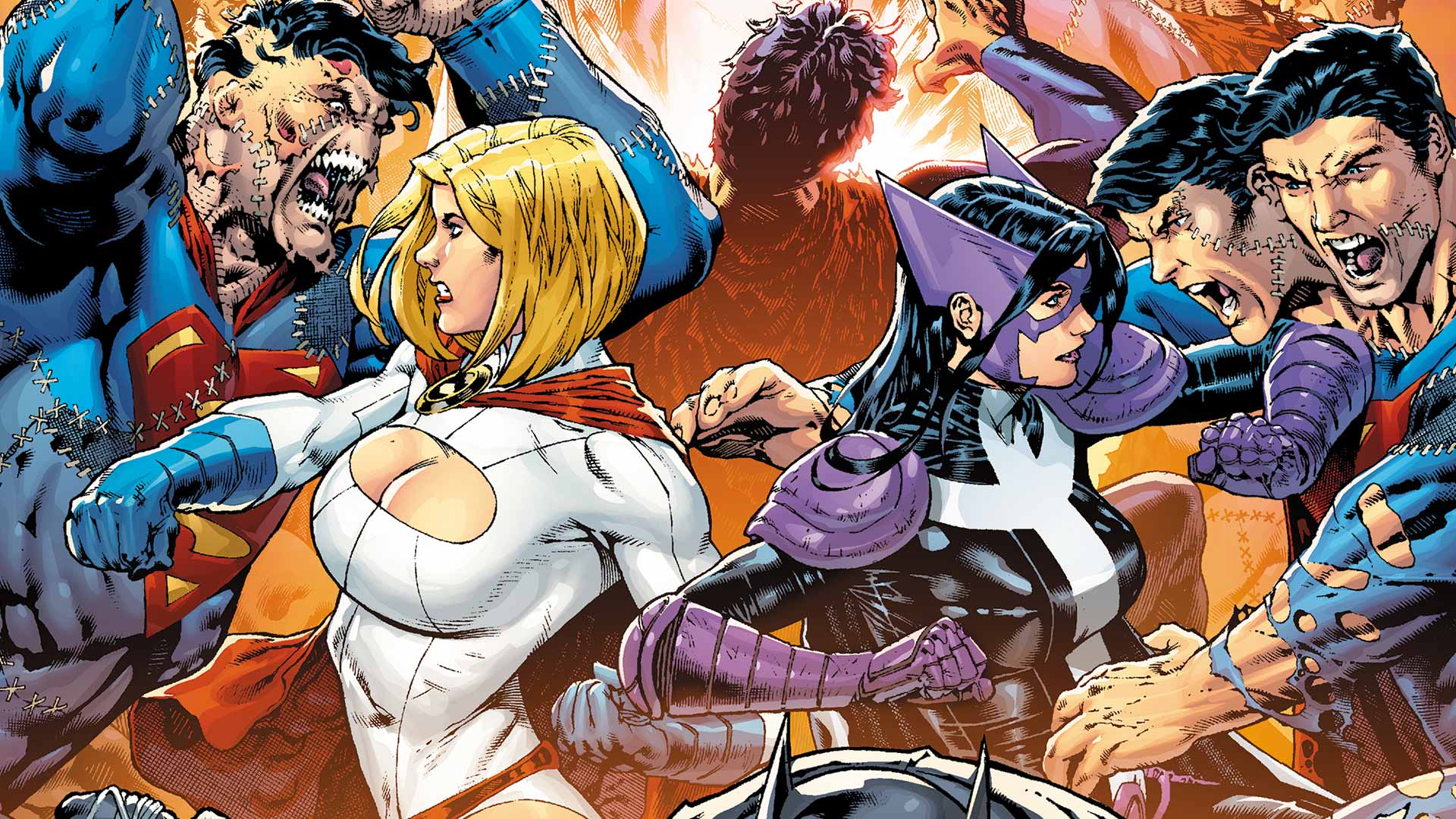 The destruction, chaos and fight to save the world continues for our Wonders in the seventh installment of the weekly series Earth 2: World’s End, entitled “Arrival”. The Furies of Apokalips take no time mourning the loss of their sister Famine, noting that perhaps her replacement will be found once Earth 2 falls to their invasion.

They sense Green Lantern Alan Scott and Solomon Grundy seeking out the other Avatars of their planet, to unite together to form the Parliament and defeat their remaining numbers. The three take off to take them head on before they can build their ranks and become a more viable threat.

It appears that Dessad is trying to lure Huntress over to their side of the battle (perhaps as the one to replace the fourth Fury) since capturing her, with many a temptation and twisted justifications. It appears to fall on deaf ears though, as Helena isn’t having any of it.

Meanwhile, the big zinger of the ending from last week and from this issue’s front cover gets underway, with the army of Superman clones breaking free and attacking Batman, Power Girl, Red Tornado and Val-Zod.

We catch up with Alan and Grundy at the once home of Sam Zhao, Alan’s deceased almost-fiance, whose spirit appears to be the Avatar of white. It seems Sam too was to propose to Alan, before the train crash way back in the first issue of Earth 2 unexpectedly took his life (and also gave Alan his powers).

Alan tries to talk to Sam’s ghost on an emotional level, but it appears that the personality and love he once shared disappeared with his last spark of life. Seemingly all business, he states that they must quickly connect with the other avatars, first with the blue, and then presumably onto the red. The identities of both are left a mystery for now.

Doctor Fate arrives to unite the Helmet of Nabu with that of the Mother Box that Jimmy Olsen possesses, ascending the young boy to some sort of God-like level. The Constantine title also ties in here, with John trying to find his way back home to Earth 0. The issue ends with Mister Miracle and Mister Terrific making a terrifying discovery that has just occurred on the Moon.

As with each subsequent issue, World’s End gets progressively tighter in the scripting and art departments, with a nice mix of focus on each sub-story and pencils and inks successfully transitioning between each. The smoothness in changes is surprisingly seamless.

The Super-clone battle we were teased with last week was criminally brief. As something I was greatly looking forward to, this was a bit of a heart-break. And the other subplots don’t seem to move much along as they have in the last few issues.

Earth 2: World’s End #7 aims high but falls a bit short. The progression isn’t in large supply, and the action was a let-down. But we do get quite the “oh crap” ending. Hopefully next week will payoff in a way that this one failed to. Not a complete stinker, but a disappointment.