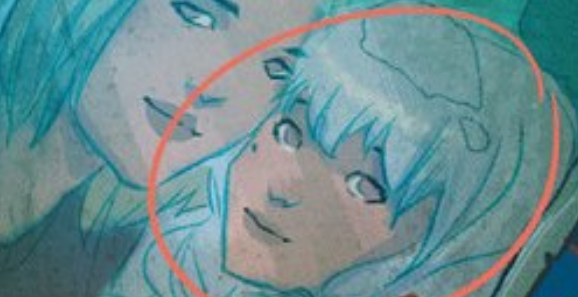 Gotham Academy # 4 written by Becky Cloonan and Brenden Fletcher, art and ink by Karl Kerschl and color by MSASSYK  and Serge Lapointe.

The kids have found out it was not in fact a ghost of Millie Jane as seen in the abandoned North Hall, but a creature. They have to keep it a secret that they were the ones that broke in, though the school is very much aware of a break-in. Meanwhile a particular symbol keeps popping up across Gotham Academy for Olive and she’s intent to find out what it means.

They consult the anxiety ridden artist Eric, since Olive found the same symbol in his sketchbook. They don’t find much information but the gig is soon up, the ghost appears at Olive and Maps’ dorm window and after finding it was fake, Olive goes to the roof and confronts the culprit; Heathcliff, Pomeline’s boyfriend. While returning back Olive finds the ubiquitous symbol again and presses on the stone panel. It opens a secret passage or catacomb in the wall. Olive finds a room at the bottom; someone has been living behind her dormroom wall. Suddenly, what appears to be Killer Croc or some other grey-scaled Arkham Inmate, who has a picture of Olive and her mother in their possession appears. Olive says she won’t say anything, but wants to talk.

e is a bit disheartening. True, it’s been rather slow and domestic, Cloonan and Fletcher are not the best storytellers, they’re good but they could learn to balance out some more interesting action to make the comics meatier, but I really like the feel overall. I can agree how they’ve presented stuff is a bit odd and I’m wanting to learn more about Olive too, which hopefully will be soon given the appearance of, I’m going presume is a sympathetic (and genius again) Killer Croc. Art is still gorgeous and such a departure from the rest of the DC line I’d hate this to stop being published. Yes it’s not as zippy or action filled as say Batgirl whose artwork it compliments, but it’s good enough. It’s good and I really hope people give it a chance from now on. I think the coloring is some of the nicest in DC’s whole line if not top 5.

Again it has been a bit slow, and some of the dialogue is a bit cheezy but it’s so animated and nice looking I’m excited to see where it actually goes. I’d like to see the supernatural ramp up. We’ll see where this goes from here.

I really like this series. Please go support Gotham Academy, it’s great for younger teens and is such a refreshing departure from the regular superhero slog.