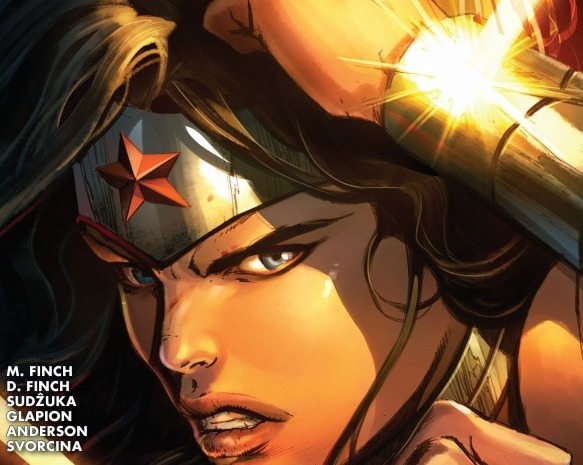 With the final chapter of amazons closed, Wonder Woman Annual reveals the real plot that has taken place from behind the curtains. The two part story is set in the past and present as the true villain behind Donna Troy’s attack is revealed.

Meredith Finch gives us two exceptional stories of both current Wonder Woman events and the history as to why her false sister had gone rouge.  Having enjoyed most of the series thus far, I thought this comic was a fitting end to the arc. I had expected confrontation between Donna and Diana and I’m glad it was so tastefully done. But not only was the first story a wonderful way to wrap things up, the second story filled in the elusive gaps perfectly. I was so excited to read about Hippolyta’s past for once and when I found out who the old crone was let’s just say it was a well-deserved justification for her to go a little crazy. Love is a powerful drug and can drive anyone to do mad things but I won’t give away too many spoilers just yet, this is just one story you must read.

God the artwork is astonishing! Both stories captured the beauty of all the characters so well and for both teams working on the pieces they have done a magnificent job. David Finch’s work is truly beautiful and suits the amazon princess so well, I’m so glad that the artwork translated once more into the annual and I can’t wait to see more of his soft detailed lines in future issues. Goran Sudzuka took on the second story and gave it his own style with a more simplistic approach. Though not as detailed as David Finch’s, the artwork stands strong and denotes a historical tone to previous art styles of Wonder Woman issues.

OK maybe a tiny spoiler. I knew that someone on that island had to have had a female lover at some point. With the speculation of Wonder Woman herself having had one in various earths, I’m glad her mother had a moment of true love. The twist of her scorned lover seeking revenge in the form of Diana’s assumed sister Donna Tory was magnificent. I hadn’t seen it coming at all and this gave all the light of Meredith Finches writing a true chance to shine through in this annual. It takes a good writer to keep you on the edge of your seat but it takes a great writer to turn you upside down on that seat without you even knowing it.

The start of the first story was a bit weak but coming from the last issue a few things still needed to be resolved. It would have been nice to perhaps start with story two first for the back-story then move into story one.

With the answers of Wonder Woman finally told, it is now up to Diana to rebuild her society. The Amazons finally have their true leader reunited and the imposed over thrown, Diana once again heralds in a new age with her lost sisters.