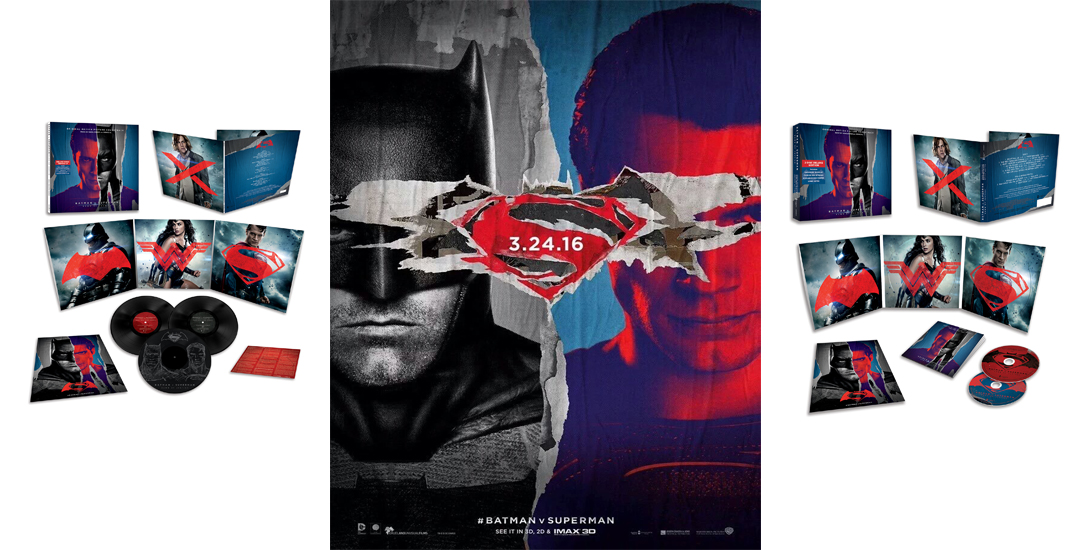 If you are a music buff then you will be pleased to hear that the official release of the Batman v Superman soundtrack lands on March 18th. WaterTower Music officially announced the news today. Below we have further details on the soundtrack where you can enjoy a preview of Hans Zimmer’s new score with Junkie XL (aka Tom Holkenborg).

The Batman v Superman soundtrack will be released in the following formats:

The CD and 2-disc deluxe CD will come with the following:

“It was a perfect idea for us to work together on the ‘Batman v Superman’ score.”

The Man of Steel

“Hans has an incredible legacy”

“and I was extremely thrilled when he approached me to work on ‘Batman v Superman’ with him.”

“Zack [Snyder] allows us to try things we haven’t tried before,”.

“He’s very supportive of the eccentricities that we bring to this.

“He’s very open and accepting of our ideas, and infuses the creative process with an energy that inspires you.”

“Hans and Tom created an incredibly compelling and interesting new musical world for Batman, while continuing to expand on the amazing world and themes Hans had previously created for Superman. By aligning their vision with my perspective and seeing the characters anew through the lens of the film they were able to support the visual aspects of movie in a way that elevates the film to another level. In so many ways, they become the final texture, the final note in the process of creating the world.”

Jason Linn who is the Music Head at WaterTower Music says:

“This electrifying collaboration brings us such brilliant new character themes,While we’ve been fortunate to work several times with both composers individually, this experience has been uniquely thrilling.”

** Deluxe versions only (it’s worth it, spend your cash)

Listen to the Preview below

You can also listen to the preview on SoundCloud here

Comment below and let us know what you think of the preview.