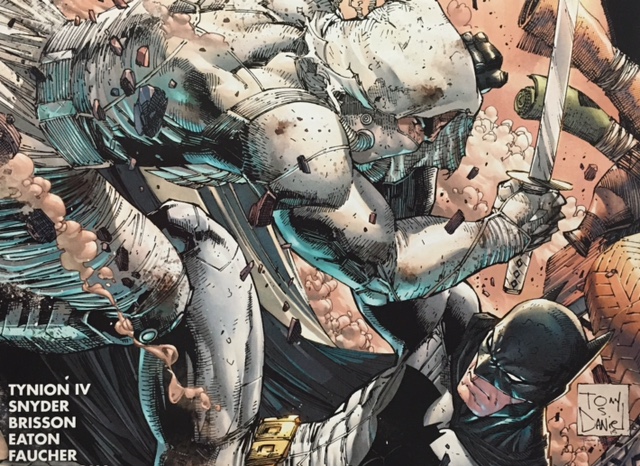 Here we go. We’ve got 9 issues left for the end run and we finally get Mother’s plan in both the present and the past laid out to us. While Batman didn’t turn out to be a killer last issue, we find out how he did err in the past. This issue gives a lot of movement to the story in the past, while the part in the present is a little slower to progress. The pacing seems right though.

The Past- Batman, Mother and Orphan in Cairo–

Seems we’re not done with that alley in Cairo yet. Orphan attempts to beat Batman down, but Batman gets the upper hand by setting off an explosive and bringing down a lot of debris on Mother and Orphan. Mother has a device projecting a live video feed of the events in Gotham City. Remember, Mother’s real target is in Gotham. Turns out that Cassandra was sent to kill the parents of Mother’s intended protégé for Batman. And she puts it all at Bruce’s feet. Perhaps, this is the one time when Batman hadn’t considered all the angles. When he was still young enough to make a mistake, when he didn’t appear perfect.

Dick and the Robin Crew consult with Dr. Netz and Helena on the Ichthys Virus. It’s been altered to only affect kids. So anyone exposed will experience the fear that Jason endured and overcame last issue. Meanwhile, we catch up with Harper and Orphan continuing their verbal sparring. Orphan continues to taunt Harper with what Cassandra’s done in the past. It doesn’t take long before he hits her with the truth, but of course spinning it the way he sees the world.

In Cairo, Mother bites down on a cyanide capsule for the easy way out. Batman tries to save her with an antidote, but the police arrive and they don’t understand what’s going on. The little boy who was in the alley and whom Batman had thought was the one Mother selected for his protégé tells the police Batman is the villain. Mother appears to die.

At St. Hadrian’s, the team figure out that Mother’s targets will be schools where lots of children can be affected at once. So what better target than Hadrian’s, a school for child super-spies. When the gas carrying the Icthys virus starts seeping in, the team scrambles. Meanwhile, David Cain tells Harper what she doesn’t want to hear, what Batman already saw in that alley in Cairo from Mother’s video projection device- Cassandra went to Gotham to kill Harper’s parents. Harper was the one Mother chose to be Dick’s replacement and Batman’s legacy.