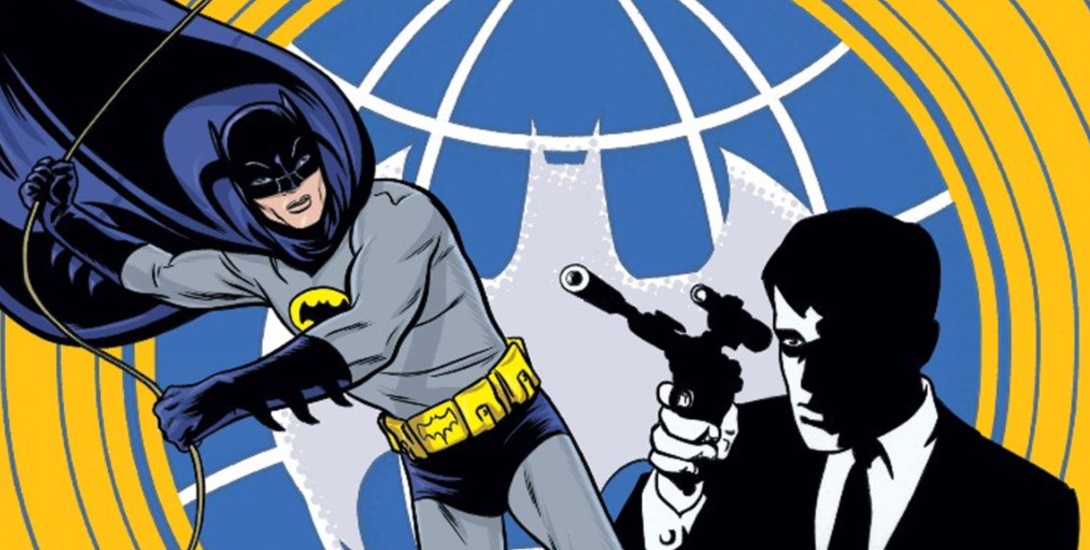 Batman ’66 Meets the Man From U.N.C.L.E. #3 is written by Jeff Parker with pencils by David Hahn and Paquale Qualano, inks by Karl Kesel and Qualano and colors by Madpencil. In this issue, T.H.R.U.S.H. enacts their plan with the villains of Gotham.

Previously in Batman ’66 Meets the Man From U.N.C.L.E., an organization called T.H.R.U.S.H. broke several of Batman’s foes out of Arkham for nefarious reasons which led to Batman, Robin and Batgirl having to team up with Napolean Solo and Illya Kuryakin of U.N.C.L.E.

The cover by Michael and Laura Allred is fantastic. The image of the heroes in the reflection of Mr. Freeze’s helmet is a cool image, pun intended, but they never actually meet with Mr. Freeze which is disappointing.

The issue begins with Batman revealing that the satellite the villains stole in the last issue was a fake and the real one is safe in Wayne Spacelab. The man who hired the villains contacts our heroes to let them know that his other operations are going swimmingly.

Scarecrow and Mr. Freeze attack two different boats and cause them to sink. Back in the Batcave, the Batfamily has a video conference call with U.N.C.L.E. where they discuss the destruction of the boats and where the next attack might be. Thanks to civilian intel, they learn that an important royal gathering is happening in Monaco and that is probably T.H.R.U.S.H.’s next target. The heroes meet in Monaco but they cannot just go to the party because they would be recognized instantly. The issue ends with Batman taking off his mask so that he can infiltrate the party.

Honestly, I do not have a lot to say about this issue. I’m not a fan of the art. While the layouts are creative and fun, the facial expressions always look strange to me. No one really looks like a person and I don’t think the style matches either show. The crossover is still fun but this particular issue does not do much for me. However, the ending is amazing and I’m incredibly excited for the next issue.