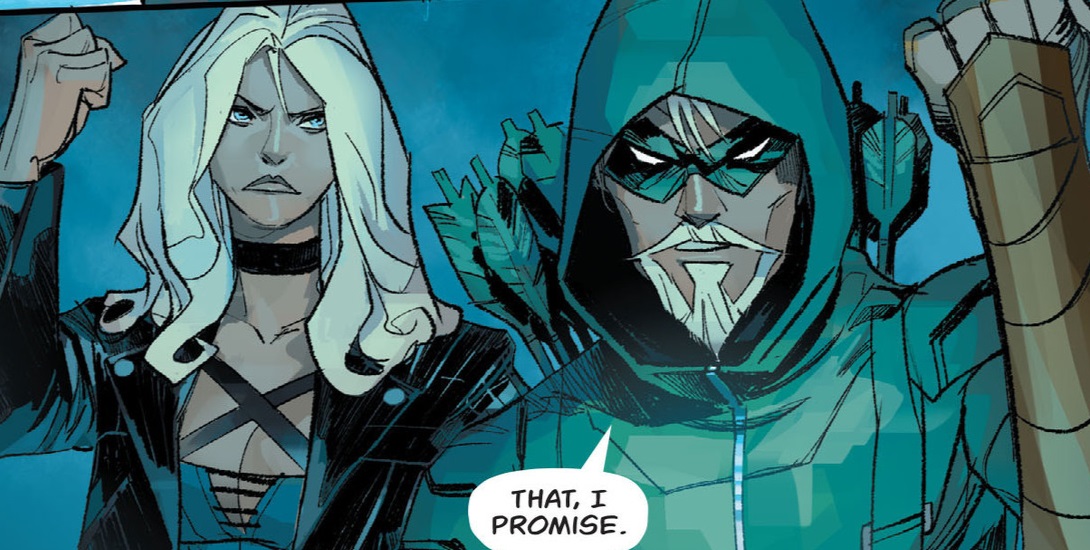 Green Arrow: Rebirth #1 is written by Benjamin Percy with art and colors by Otto Schmidt.

The issue begins with a homeless woman being kidnapped off the streets while her son watches. Later, the son is being dragged through the streets by a hooded figure and Green Arrow jumps in to save him. However, the hooded figure is Black Canary. She was trying to get him to a place where he could get a bath and medical attention and he was protesting because he wanted to save his mom. Ollie takes the two back to his house to take care of the kid. He reveals there that his mom has been kidnapped. He leads them to the Jungle, a homeless encampment in the forest. However, what the kid refers to as the Underground Men attack kidnapping more people. Green Arrow and Black Canary track them to their underground base where they are selling the homeless on an auction to rich people in masks. The duo stops the auction and Green Arrow vows to stop the whole operation and everyone who has taken part in it. The issue ends with Green Arrow and Black Canary introducing themselves to each other as Oliver Queen and Dinah Lance.

Green Arrow and Black Canary are back together as a team and that makes everything in my world okay again. Maybe that’s an exaggeration but it is great to see these two together. They just have a cool dynamic. Both are incredibly stubborn and always speak their minds. The thing I’ve always liked about the two is they never took crap from the other. They keep each other honest about themselves and that’s true here as well. When they argue, it feels natural and both make good points.

I like the question of Ollie’s money that Dinah brings up. On one hand, it does make him exactly the kind of person he is trying to fight. On the other hand, he needs that money to do what he does. It’s a good argument that could lead to some cool places.

Human trafficking is a major problem where I live and the community is working very hard to combat it. Despite the serious efforts, it is still something that seems to happen a lot and my community, for whatever reason, is a massive spot for these heinous actions. It struck an enormous chord with me to see Green Arrow and Black Canary take these kind of people head on. Percy has said in interviews that one of his main objectives with Rebirth is to tackle major societal issues head on and I’m glad that this is the one he chose first because it’s one that doesn’t have enough exposure. People just are not aware of it and I hope this book can help start the conversation.

Beyond the political aspects, the story is just creepy. Human trafficking is scary and I like creating an organization that Green Arrow and Black Canary can take down. The most obvious influence is the Court of Owls but, so far, this group stands distinctly from the Court because they obviously have different goals and agendas.

Green Arrow proudly proclaims to be a Social Justice Warrior and I love everything about that and Percy for writing it.

Black Canary is wearing a scary robe at the beginning simply so that she can have a dramatic reveal. I understand the necessity of the reveal but it is so silly.

While I love the big argument that Dinah and Ollie have about money, I think it could have been used in a different location. They’re having this huge verbal fight while trying to help this kid in the Jungle and it comes across a little selfish. There’s a better time and place for what they’re doing. I felt they should have talked this out at Ollie’s pad and then went to the Jungle.

This book left me feeling great. I was just excited about everything and that is the best feeling to have with comics and entertainment in general. It’s everything I could have wanted and more. The plot, the characterizations and the art all just sing to me. I cannot wait to see what Percy has up his sleeve because he seems just as excited about this book as I am if not more so. While I thought his run on Green Arrow before this issue was okay, it really needed a spark of life and it has it in spades now. If you have felt disappointed by the Green Arrow comics or the television show Arrow lately, this will absolutely fill that void. I highly recommend picking this issue up because it is stellar. 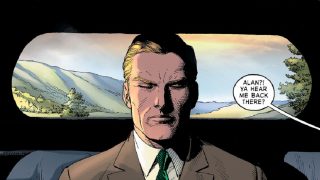 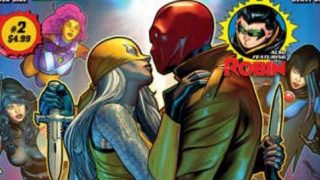