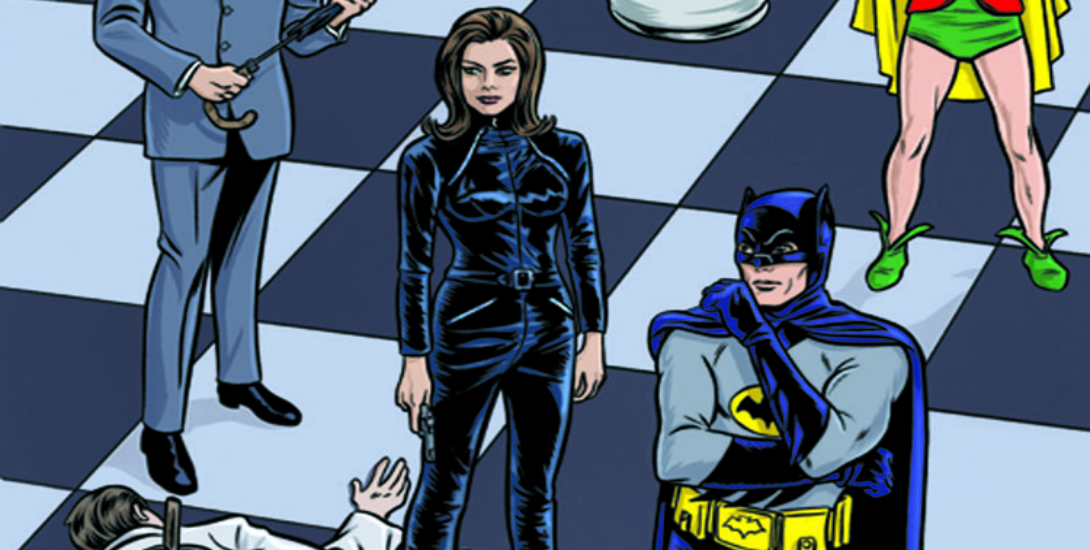 Summary
Continuing on a roll of amazing 60’s television show crossovers, Batman ’66 returns today in a meetup with a new team from the golden age of television. He’s met Green Hornet, he’s met The Man From U.N.C.L.E., but he’s not stopping there. Our beloved Caped Crusader, accompanied by his trusty sidekick Robin, heads to a museum exhibit to defend the White Star Diamond, on loan from the British Royal Family. Bruce Wayne is courting high-fashion British CEO of United Automation, Michaela Gough.

The story leads off with a standard Batman ’66 exposition style, introducing the characters and their backgrounds by making them speak it, and then telling the reader what they’re doing there in the first place. Michaela Gough is a female CEO in a male-dominated industry, and she is happy to break the mold and walk tall, commanding respect from her male counterparts. In usual fashion, Bruce Wayne cannot go very long without mentioning Batman and associates. Gotham is a very forward-thinking city, because it has a female crime fighter (Batgirl).

Positives
Writer Ian Edginton subtly captures the essence of the show’s camp in the book, just enough to keep us reminiscent, but not so much as to make us groan and roll our eyes. Alfred puts on the cape and cowl this issue, and while he doesn’t say much in-costume, he is portrayed as being a stumbling stand-in, out of sync with the dramatic harmony that Bruce and Dick have when they enter a crime scene. The villainous vixen and her cohorts are already vanquished, however, and moustache-Batman and Robin are forced to take a backseat.

As Catwoman is led off to the paddy wagon, we catch a glimpse of a mysterious shadowy figure watching from an alley across the street. Who could this person be? Friend, or foe? Find out in the next issue of Batman ’66 Meets Steed and Mrs Peel, same Bat-time, same Bat-book!

Matthew Dow Smith’s artwork in the book is spot on; the main characters of the story have the brightest and flashiest colors, while the background is grayed with very limited detail. This technique helps accentuate the prominence of each character in each panel. The style of each character is also captured perfectly, from Michaela Gough’s posh Mondrian dress and go-go boots to Catwoman’s famous black jumpsuit, to the tiger-striped jackets of her henchmen.

While clearly art is clearly drawn, it looks like photographs converted to sketches and then colored. Seriously, Smith has got this style down pat.

Negatives
Unfortunately, the story is over almost right after it begins, with no real exposition as to what we can expect, or why Steed and Mrs. Peel are even IN Gotham. That’s okay, though. This issue is the first of twelve issues, set to release biweekly over the course of the next several months. The print release of this book starts in July, so keep your eyes peeled!