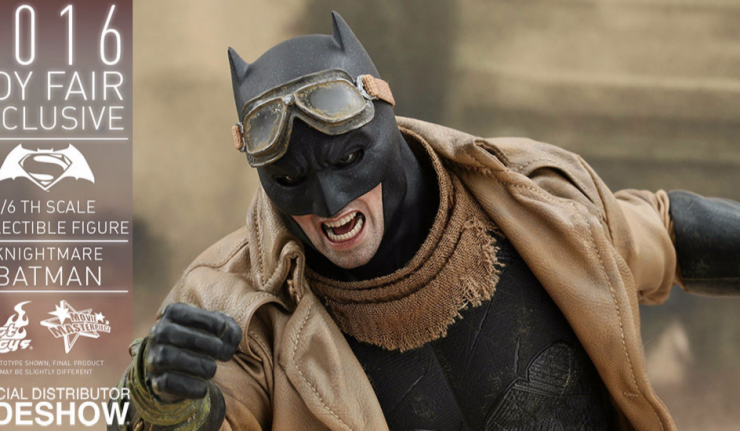 The Knightmare Batman Sixth Scale Figure will have a cost of $234.99 (which does not include shipping). Sideshow Collectibles have payment plans starting as low as $70.66 a month with a non-refundable deposit of $23.00! You can now click on our Sideshow Collectibles banner (conveniently  located at the top right of your screen under the search bar) & purchase merchandise in a safe and secure way. Simply click the banner, and add to your collection. It’s that easy!

In DC Comics’ blockbuster Batman v Superman: Dawn of Justice, audience and fans were intrigued by the “dream” Bruce Wayne had. Equipped with desert gear and guns, Batman battles waves of Superman’s minions and monsters in an apocalyptic world. Many fans have been anticipating the release of this unique look of Batman and today, Sideshow and Hot Toys is excited to officially introduce the Knightmare Batman Sixth Scale Figure as a 2016 Toy Fair exclusive item.

Batman fans shouldn’t miss out on having this new Knightmare Batman collectible figure in their prized collection!

WHAT’S IN THE BOX?

– Each piece of head sculpt is specially hand-painted