This is a spoiler-free review.

Adventures of Supergirl #5 is written by Sterling Gates with art by Cat Staggs and Emma Vieceli and colors by John Rauch and Sandra Molina. 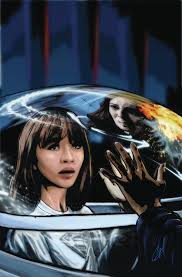 Kara, along with her friends and family, have been targeted by Fort Rozz escapees. They were hired by a being known as Facet who told Kara to ask her mother what was going on.

Kara learns the mystery of Facet from her mother’s A.I.

There is another amazing cover by Staggs. I have been loving every one of these covers so I got very excited when I actually opened up the book and saw Staggs’ style. It’s really amazing to see her work inside of the book for a change. One of Staggs’ biggest strengths is the way she can capture the emotion of a person’s face and especially their eyes. Her section of the book ends with a panel of Kara sitting and thinking. There is no dialogue and there are no thought balloons. Everything you need to know is displayed by this beautiful drawing of Kara. Beyond the fact that it looks exactly like Melissa Benoist, Staggs is able to capture the emotion of Benoist’s face very well. I can practically see her performance through Staggs’ art and that is quite impressive.

In the second half, Vieceli takes over. Her style is less realistic but I think it fits the tone of the show very well. Molina’s bright colors immediately give me the same feelings of joy when I watch the show. I also like that Staggs’ section is mostly dialogue while Vieceli’s section features the action. I think Vieceli’s style is better suited for dynamic action that is fun to look at. The difference in color is also fun. Rauch’s colors are moody and dark; they fit the somber tone of the first half while Molina’s are more vibrant and better suited for action. 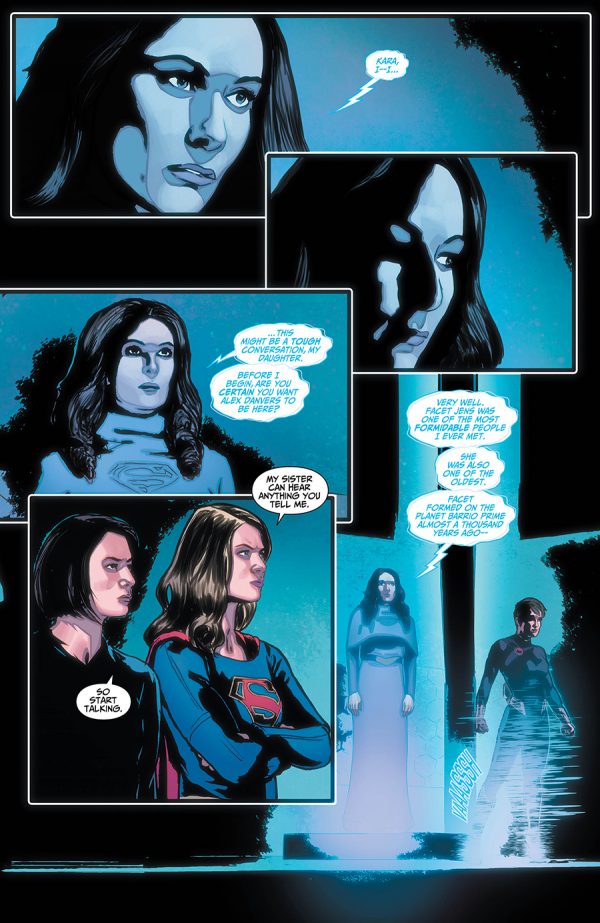 Gates does a lot more with Kara’s Kryptonian mother here that I found really interesting. There is an obvious parallel to reality in Kara’s situation. At some point, every kid feels like they have to clean their parents’ mess. Being a millennial, there is sometimes a feeling I get that Generation X kind of screwed up the world and that an almost impossible situation is being left for us to deal with. And I’m sure that people from Generation X felt the same way about their parents. That is a very understandable situation for Kara. Her mother made all of these mistakes and poor choices that are continually ruining Kara’s life and sometimes nearly ending it. It was refreshing to see Kara react negatively to that and have to see her mother as less than perfect. That’s a hard part of growing up that I wish the show had dealt with more.

I also like the world building that Gates does as well. He gives us some history on Krypton that’s actually fascinating. It’s fun to explore their culture and society a little more. That’s a fun aspect of Supergirl that you can’t have with Superman since he was raised on Earth.

While I love Staggs and her work, a couple of the facial expressions are a little silly. I think she’s wonderful at creating a subtle and nuanced face that can say a lot. But, some of the more exaggerated facial expressions when Kara is angry and yelling look odd. They don’t appear natural which does stand out when 99% of the art looks that photo-realistic.

Gates and the various artists are knocking it out of the park. This could have easily been a cheap tie in to the show that was boring and only made to make a quick buck off the success of the show. But the creative team gives it their all in a story that is both fun and thought provoking. It’s one of the best DC books right now which is saying a lot considering how good of a place DC is in right now. I don’t just recommend this to fans of the show or fans of Supergirl as a character even though those people will absolutely adore this. I recommend this, and the entire series so far, to anyone that just likes good stories.