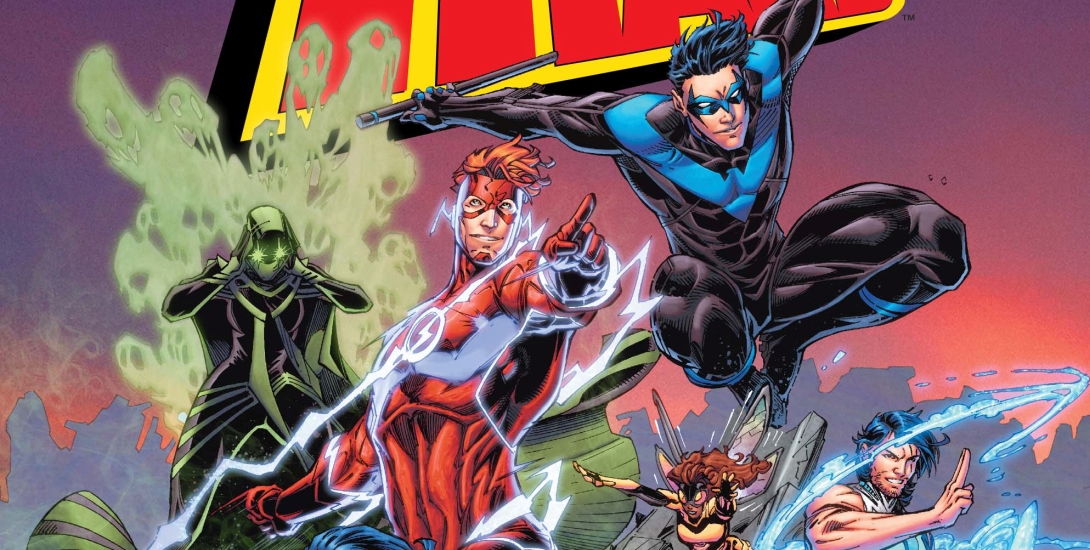 Despite this being the first issue of a team book, the focus is very much on a single member – the original Wally West. The story starts with a quick overview of his past, starting as Kid Flash, junior partner to the Flash (Barry Allen), being a member of the original Teen Titans, meeting the love of his life, Linda Park, then being erased from history. We also get a shortened retelling of his return to the DC Universe as told in DC Universe: Rebirth #1 and The Flash: Rebirth #1.

An important point is stressed here. Barry had told him in those books, “You’re a Flash,” and Wally affirms this: “Because he was right. I’m a Flash.” Although he is wearing a new uniform, DC is recognizing that he has earned the right to be the Flash, and not relegating him to some new identity to avoid having two Flashes.

We then find that Wally’s narration is actually being described to Lilith (going by the superhero name Omen). Lilith is attempting to use her psychic abilities to see if Wally’s memories have some clue about the mysterious threat that has been messing with their history. Unfortunately, Wally’s mind is too stuck on Linda for Lilith to get a fix on anything else.

Then we are shown Linda herself, recalling her meeting with Wally. From her point of view, a stranger resembling the Flash appeared, talking as if he knew her. She doesn’t know what was going on, but her reporter’s instincts tell her that this is a big story.

Back at Dick Grayson’s loft, the Titans are discussing the anonymous threat. One possible lead is Mammoth, who was also involved in the events of the Titans Hunt mini-series. So Arsenal and Donna Troy set off to track him down. They discover that he works for someone called Psimon. Longtime readers will be able to put two and two together and get five – the Fearsome Five, a supervillain group that both Psimon and Mammoth belonged to in the pre-Flashpoint DC Universe.

They rejoin the rest of the group as Lilith manages to sense a dormant presence while probing Wally’s memories. She realizes that she has woken this presence up, and that by doing so, she has done something terrible.

Meanwhile, in Keystone City, we find out who this presence is, as we see an incompetent party magician regaining his memories and being restored to his true form – Abra Kadabra, one of the Flash’s most dangerous villains.

There is much to love about this issue, especially if you’re a fan of Wally West. Wally has some great moments here: the retelling of his reunion with Barry, his love for Linda, his reaffirmation of his identity as the Flash.

There is also some nice moments showing the recently rediscovered friendship between the members of the Titans, such as the teasing Wally endures after telling the others about Linda. There is also a touching scene between Arsenal and Donna where Roy tells her of his past as an addict and Donna laments the memories that they have lost.

DC is successfully keeping their promise to return their characters to the core characteristics that made them great while also making them new and fresh. These characters feel like the same people that we knew from the pre-Flashpoint Titans.

This is not entirely a negative, but I have some reservations about Wally’s new uniform. At first, I didn’t like it, but it’s growing on me. I like that his hair is uncovered, which evokes his original Kid Flash costume. What does bother me is that his costume looks odd without any gold elements, especially the Flash symbol on his chest. However, I do think the white lightning effect when he uses his powers works well.

Also, the focus seemed just slightly too heavy on Wally, almost making it seem as if the other Titans were his supporting cast. However, I trust that this is just due to the opening storyline being centered around him and that the rest will get their chances to shine in further issues.

Also, I am wondering how much of his life Wally remembers. He said in the Rebirth special that his memories were fading. He remembers Linda, but does he remember that they were married? Does he remember their children, Iris and Jai? Hopefully this doesn’t mean that they are written out of DC continuity altogether. I would still like to see Iris continue her career as the new Impulse.

Despite these quibbles, it is overall a very good story. It furthers the Rebirth storyline a bit and further cements Wally’s restored place in the DC Universe. Once again, DC is successfully restoring classic elements of the characters while carrying their story forward instead of backward.