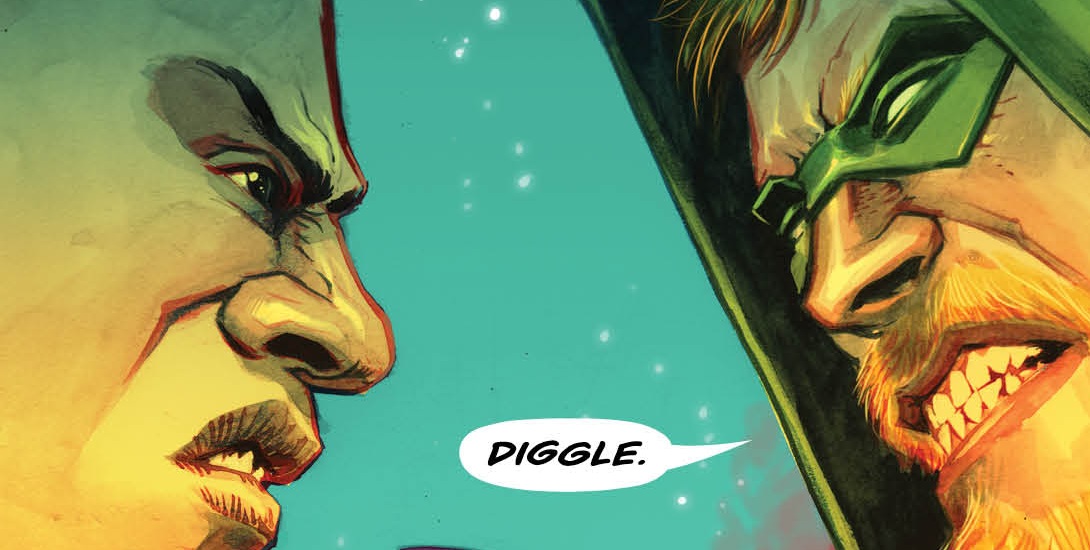 Oliver teams up with Diggle while Emiko captures Dinah.

Juan Ferreyra’s cover is really cool. I like the simple line that divides the two sides. It’s a good choice. I also like the contrast of Ollie and Shado’s heads with Dinah and Emiko’s full bodies.

Ferreyra does the art and color and both are incredible. The detail and style that Ferreyra puts into every panel makes this such a fun book to look at. His layouts are a lot of fun as well. The best example is the scene in which Oliver and Diggle meet again for the first time and their heads are giant overhead on a far away shot of the two.

The dynamic between Oliver and Diggle is a lot of fun. For fans of the TV show, the relationship might be a little jarring. They have been quite hostile to each other since Jeff Lemire wrote Diggle into the main DC Universe but there is a mutual respect and love. I like that Benjamin Percy gives us hints to what happened between the two but never comes right out and says it. From Diggle’s dialogue, there are two different possibilities and I like that there aren’t any exposition heavy scenes about it. They talk about it naturally because both men already know what happened even if the audience does not.

I like that Fyff is still going to be helping. I was worried that Percy had written him out but he is still here and relevant which is nice for someone like me who loves Lemire’s run.

The pace of this issue is really strong. It moves and is very easy to read through without ever feeling bored. The issue is exciting and energizes you even there isn’t a lot of action. The information we learn about the Ninth Circle is scary. I was worried they would end up being a Court of Owls rip off but Percy is doing a great job of making them distinct while serving the same purpose for Oliver as a character that the Court served for Bruce’s character. The stakes are raised to eleven here and you can feel it as a reader.

I don’t like that Dinah is a damsel in distress that Oliver and Diggle are going to have to rescue. It’s not a big deal but she got captured so damn easily. She’s the Black Canary and she wasn’t able to put up a fight. She did get a cool moment of interrogation at least.

I’m still not sure how I feel about Emiko being evil. There’s a part of me that’s still holding on to the hope that she’s a double agent but she goes pretty dark in this issue. It’s getting hard to believe that. She’s been one of favorite characters lately and I feel that there is more potential for her on Ollie’s side. However, I am completely willing to see what Percy has up his sleeve for her. I can probably buy her being a traitor if there’s an interesting motive behind it but I’ll just have to wait and see.

This is an excellent issue. I felt that the last couple of issues were a little slow but this gets back on course for me. It’s a fairly thrilling story now that all of the pieces are in place. The villains really step up and become much more menacing with the heroes going up against impossible odds for them. I highly recommend checking this issue out. 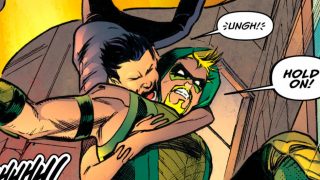 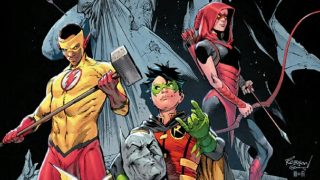