Story 1, “The Black Vault; Blitzkrieg Bop,” picks up where the last issue left off. The Suicide Squad is under the Arctic Ocean, suits are compromised, things are a mess. Back in Louisiana, Amanda Waller watches the action while new NSA advisor, Harcourt, watches over her shoulder. You can only imagine how much Waller likes that. 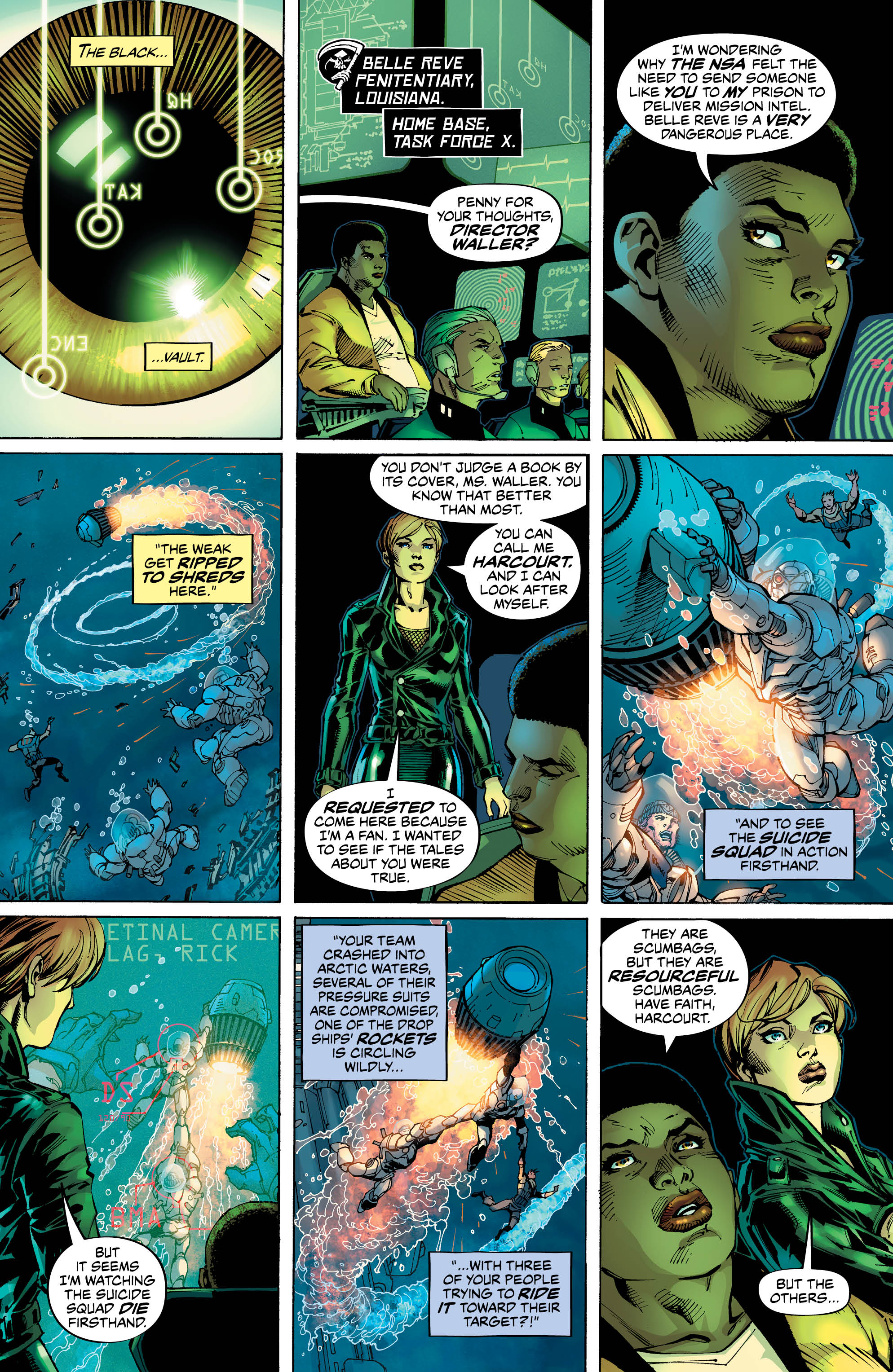 Story 2, “Boomerang; Agent of Oz,” is Boomerang’s origin story told to Waller. Like the last issue with Deadshot,  Waller already knows all of this, she just wants him to know she knows. Fact and fiction weave and and out of the story, but Waller keeps us on track.

Just a quick note before the praise is piled on to this team. Harley looking right at me on that cover. Wow. That is something else. 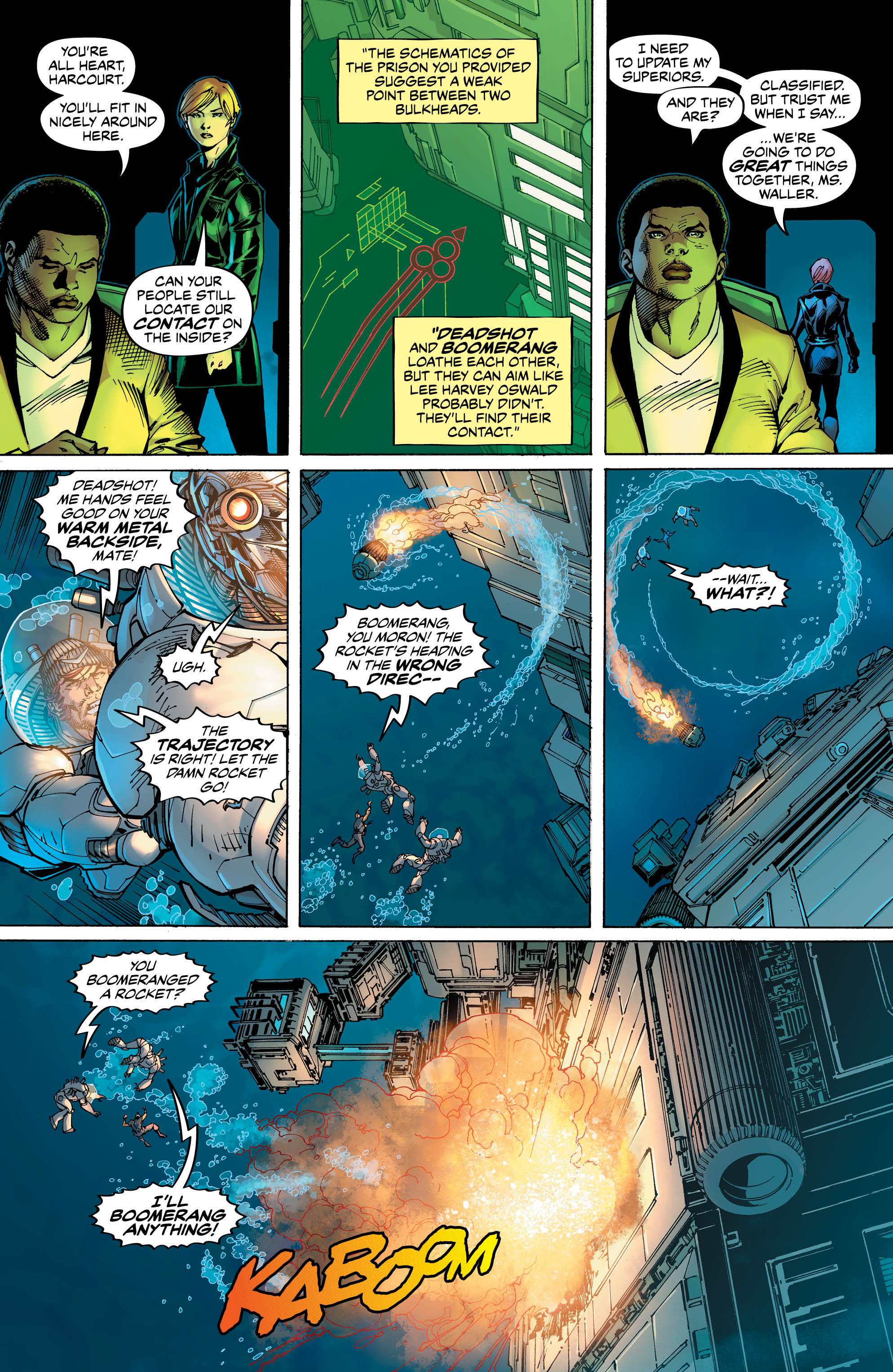 Jim Lee has a lot of really tiny panels in which to work. In some cases, there are 9 panels per page. In the hands of mere mortals, that would be an issue. Luckily, this is Jim Lee. Waller and Harcourt are watching the action on monitors so we watch the action on monitors. Harcourt standing behind Waller, Squad in action, back to Belle Reve, back to the action. The reader has never felt more like an active participate in a book before. Finally, Lee gets to get a little bigger and each page has three panels, until Croc rips a hole in the wall and we get to see it up close and personal. People shoot, the squad goes into action. Lee gets even closer. Harley’s ammo belt has hearts on it. Katana decapitates and literally disarms some guards. Boomerang throws in his support. It is a giant bloody mess. It is glorious (if you like that kind of thing). 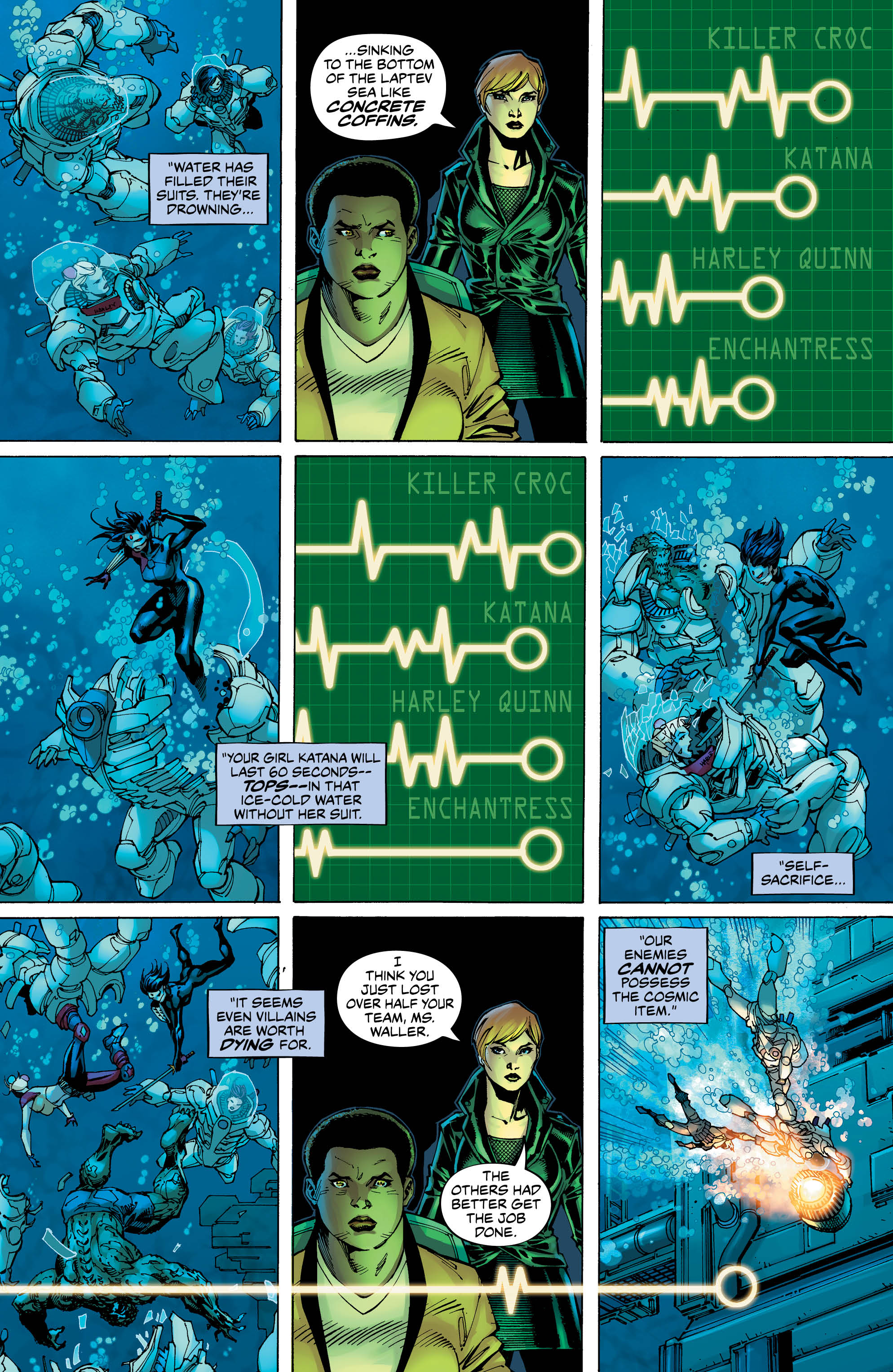 Rob Williams is a dialogue king. While Harley and Katana are facing 15 men Harley asks:

Hey Katana, read any good books lately? Any good films? How about Neoliberalism? Do you, like myself, subscribe to the theory that, as an ideology it is largely to blame for the majority of the issues economical and ecological, currently facing our troubled planet?

This book is full of hysterical quips, mostly from Harley, but Enchantress and Boomerang get a few in as well. The thing about Williams is, the does not just give us dialogue, but story. The new characters, Harcourt and Hack, are intriguing. Is what happens on the second to last page real or will there be a way out of it for that member of the team? That last panel is gasp worthy. Give me more.

The second story is just as full of Williams’ brilliance and artist Ivan Reis brings Boomerang’s fanciful tale to life. Since most of this is fantasy anyway, the images are almost out of focus as though it is flashback in an old movie. He cuts from big to small panel inlays fluidly. The whole story flies by but it would smart to go back and look at it again without reading it. There is a scene where Digger dips a woman called Shelia Upforit (see, Williams knows just what he is doing) as the world burns behind them. Find a convention where Reis is, buy that panel, have him sign it, and keep it forever.

This two story thing is disconcerting. The main story is so good and the art is incredible. I feel like I keep getting ripped off of a full book. That is not to say the second stories are bad. They are not bad at all, I just want more of the main story.

Review: Red Hood and the Outlaws #2