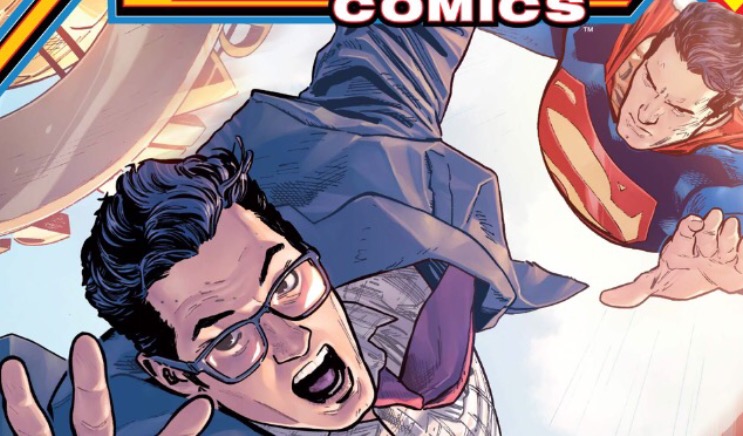 One of the biggest — if not the biggest — mysteries in the Rebirth era of Action Comics has to be the question “Who is Clark Kent?” Not too long ago, the “New 52” Superman was revealed to be Clark Kent. Upon that Superman’s death both Clark and a new replacement Superman co-exist with Clark claiming he’s definitely not Superman. With Action Comics #963, Dan Jurgens and company are going to finally tell the story of how this is possible, because people the world over KNOW that Superman is secretly Clark Kent, mild-mannered reported for the Daily Planet…isn’t he?

Clark is following up on a story for the Planet that he had been working on a few months ago. He’s in a bit of a spot. He’s trapped in a stairwell of the Geneticron building with a security guard taking shots at him. The story plays out in a series of flashbacks interspersed with the “Now” being Clark’s distress in the Geneticron building. We learn that earlier in the day Lex Luthor has called a news conference to allow Clark to clear up the misunderstanding about his identity. Kent tells his story including Superman having warned him of the dangers of the Geneticron story he was working on. The news conference doesn’t go well and someone takes a shot at Kent.

Kent is also given a lie detector test which he passes. All this makes Kent realize he must keep on Geneticron. This is how he gets into Lois Lane-style trouble and is on the receiving end of a classic super-save!

The basic premise is compelling, and worth the price of the comic. DC has a real poser on their hands. It seemed risky last year to out Kent as Superman, but to separate them into different individuals seems like an even more difficult status quo to maintain for long. However, this first chapter contains some really intriguing moments as we learn Kent’s side of the story and we see him in full reporter mode without super powers to rely on. It has some of that Mort Weisinger “imaginary story” quality to it from decades past, but at the same time feels like the real thing as the premise is part of a bigger story tapestry unfolding across not only the Superbooks but the entire DC line as part of Rebirth.

Something that really stood out visually, or at least the connection I finally made regarding the Rebirth of Superman’s that oddly became apparent was the change in color of Superman’s boots from red to blue.  With the “New 52” Superman lost his red trunks, and now he’s lost his red boots.

This issue really appealed to my love of mystery and character building. At its heart, this story is about Clark and relationships. In this set up issue, everything is headed in the right direction and Action Comics #963 does everything right. It’s said it’s hard to tell a Superman story because Superman is so powerful. Most of the best Superman stories over the years have dealt with Superman’s humanity. This story seems like it will focus heavily on his humanity as it has been separated entirely from him to exist as a distinct individual. Whether literally or figuratively, this idea is high concept and potential for an absolutely dynamite Superman tale.

This issue manages to be both large and small all at the same time. It feels intimate and personal while dealing with huge ramifications for Superman and the entire DC Universe. If you’ve only passing interest in Superman, there’s no way you can read Action Comics #963 and not get caught up in the excitement and intrigue.  If you’re a fan you cannot miss this issue and this story line. 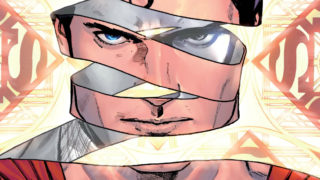