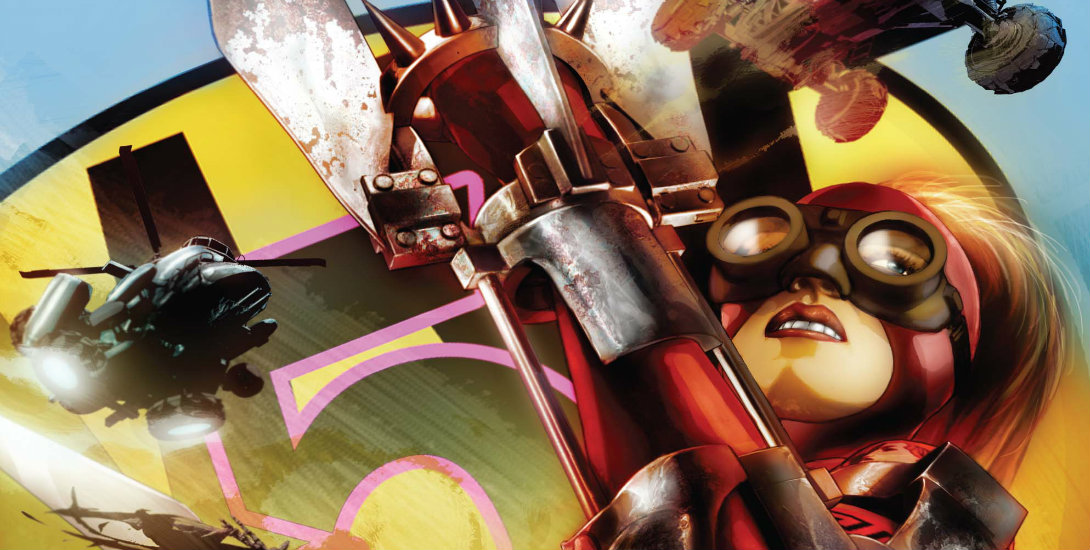 Summary
In this issue, the Racers, hungry for anything fresh, eat some random mushrooms they find in an oasis. The mushrooms, that are most likely mutated peyote, cause them all to trip. They trip hard. They have flashbacks to a place called the Butcher Shop. We find out that the Butcher Shop is the place where the Wacky Races began. There is cloning, genetic engineering and mind manipulation. Who is behind it? Who is the announcer? What is up? More and more questions and the final page gives at least one answer (and then more questions).

Positives
It is always better to know more than to know less. Readers have wondered what is going on and we might finally be getting an idea that what we think has happened is not real. There is a reason that the flashback scenes are always cloudy. There is a reason that some of the characters do not seem to make any sense and seem out of time. It is because they are. What?! Why?! Who?! Seriously, I am not going to spoil that one. You are just going to have to read this to find out.

Leonardo Manco has not gotten enough love from me during these recent reviews. That ends now. Leonardo Manco has a lot to deal with in each and every issue of this book. He has ten teams to draw each and every issue. This is not a book about background images (of course they matter) but about characters. Sure, there is a plot, but the characters make the plot work. Each character has a facial expression (or muzzle expression in the case of Muttley). Those expressions were important because in this issue there is a huge splash page with each character totally tripping and out of character. If Manco had not been so brilliant thus far and created a baseline for the reader, this page would lose all meaning. Each issue has had a brilliant splash page, but honestly, this is my favorite.  I need to figure out how to get a poster.

Negatives
This series is now listed as a mini-series. That means Pontac has to hurry up to get everything crammed in two final issues. To that end, the action is truncated in order to move along the plot. It just doesn’t work here. The action has been graphic and detailed and important to the plot, but here it feels like we just get a greatest hits instead of the full album. Granted, there are some eye-opening moments, but the reader has the feeling that the plan was for this to come out a bit later in the book.

Verdict
Of the five issues, this is the weakest link. However, if I only read this one issue, I would have loved it. The problem with creating something amazing is that all of your future work will be held against what came before it. Comparing issue five to issue one feels like Closing Time in comparison to Catch-22 or Go Set a Watchman in comparison to To Kill a Mockingbird.  It could be great, but it is hard to tell. I am looking forward to seeing what Pontac and team have for us next month. I hope DC gives him a double issue. There are a lot of loose ends.