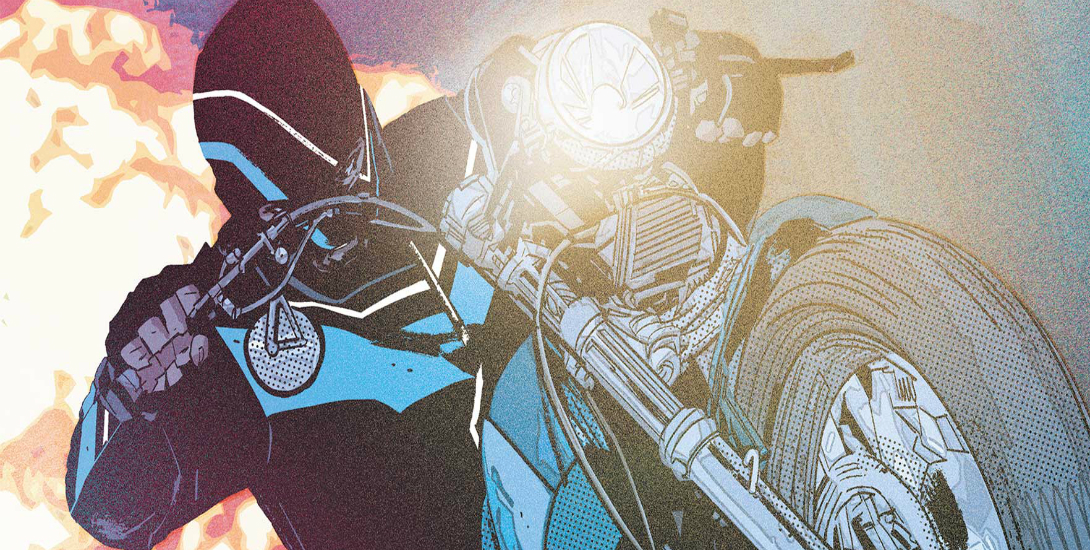 Summary
There are times when it seems this title would be better as a farce or comedy. With that said, the plot does move forward some. So Donny’s lead from last issue ends up throwing him into the frying pan from the fire. It goes sideways on him and while his Kevlar protects him, he ends up diving off a cliff, getting shot at and chased by a police helicopter. Donny displays some surprising abilities as he manages an escape. Donny finds out in the morning that Percy’s mission ends poorly as well. Meanwhile, there’s another murder and some domination.

Donny does learn something from his failed episode as he gets a lead from a number on the boat with the gunman that shot at him. When he talks to Nina and Mike, he and Mike get into it. Eventually, Donny sets off on his lead and it ends up with him unconscious in an alley about to be attacked by two wild dogs.

Positives
Easily the best part of this book is the art and colors by Casagrande and Brusco. They create a nice atmospheric setting with some nice hatching and effective color palate.

Negatives
The biggest problem with this book continues to be the lack of interest in the characters. Donny and Mike’s row just reeks of cliché language and it is resolved too quickly to seem natural. Part of this is that you really don’t care if they resolve their issues. Everything Mike says is right, Donny is inexperienced and a loser. Donny’s escape at the beginning of the issue seems oddly inconsistent. He doesn’t appear to have the skills to allow him to escape like he did. If Donny was more likable, this might not be such a big problem, but it plays into his characterization as a young, angry slacker. Lastly, the extended cast of characters have not been portrayed memorably, so the mystery at the bottom of all of this tends to get muddled. It’s easy to remember Donny’s girlfriend was murdered and it has something to do with the University’s Alumni Office, but that’s about it. Everything else seems to run together.

Verdict
Casagrande and Brusco’s  work gives this book the 2 star rating alone.  Not sure what this book is really supposed to do but secure he copyright for the Vigilante concept again. DC should probably try a different take on the character, perhaps a return to the Greg Saunders incarnation.