Review: Batgirl and the Birds of Prey #7 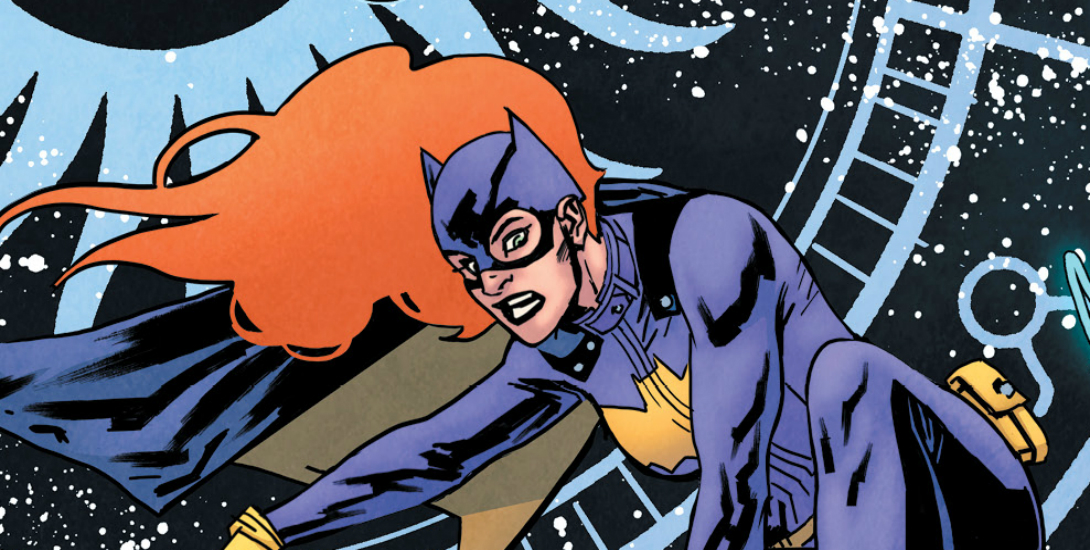 Summary
There are a few elements which have always made the Birds of Prey great: feminine power, chemistry and characterization. Batgirl and the Birds of Prey #7 nails all these elements in a one off story that resolves a sub-plot from the previous 6 issues, but also varies the pace from the 6 issue story arc.

While the Birds are engaged in stopping a new threat, a zodiac themed protection racket, Barbara gets an alert that the Clocktower is in the midst of a breaking and entering. She leaves Dinah and Helena to the zodiac zero and head back to the tower. When she arrives, there’s no sign of an intruder. However, she suspects it’s her realtors and decides to investigate on the morrow. This of course leads to Dinah and Helena going under cover.

The realtors, a husband and wife team, show Helena and Dinah a series of properties that were recently owned by criminals including the Riddler’s most recent apartment, a Cobblepot place and Santo’s estate, yes Santo, whom they just tracked down and put away last issue. It seems that they have a near encyclopedic knowledge of the properties they sell which they work up as in a folio to present to the new owners. Babs realize that she didn’t get such a house warming gift and begins to investigate the history of the Clocktower on her own.  Seems it was once the hideout of a gang who perpetrated a serious bank robbery and the gold bars were never found.  Well, Babs goes excavating and finds them.

In a move to teach the realtors a lesson, she donates the money from the gold to a charity and does it publicly and the realtors watch their retirement fund disappear.  Although, Babs does credit them with the find and recommend them publicly as the best realtors in town.  So, it’s happens to be Valentine’s Day and Dinah has missed her date with Ollie (Green Arrow) and Babs has stumbled across Dick’s Facebook page to see he’s now “in a relationship” (see Nightwing #14).  The Birds break out some champagne and chocolate and have a little party all their own, as they also celebrate Helena’s decision to stay in Gotham.

Positives
At one point in this issue, Helena has to stay at Dinah’s place for a night and their interaction is not only humorous, but also very real.  They come across as real people who might work together, but have very different expectations.  The way in which Babs, Dinah and Helena react to one another is what makes the chemistry.  We all know they can kick ass, but it’s their personal interactions and genuine friendship that sells the book.  Dinah and Helena going undercover was a nice blast from the past, as Dinah routinely did this back in the ’90’s.  Once again, Helena’s reaction to the whole thing was a humorous juxtaposition to Dinah’s gung ho attitude.  Lastly, the fact that they fell into a girls night on Valentine’s Day was a nice treat as it reinforces not only their independence, but made for a very satisfying alternative to the ridiculous expectations for the holiday. Bah, humbug!  Oh, wait, that’s a different holiday.

Claire Roe returned this issue, and despite some awkward faces, she really adds a dynamism to the layouts and blocking in the issue.  Inking her own work did seem to minimize some of the awkwardness from her first few issues.

Negatives
This is what a Birds of Prey book is supposed to be like – not sure I can really point out anything negative.

Verdict
Batgirl and the Birds of Prey is in top form.  This has surpassed the “New 52” run and is taking the best from the classic run and making it fresh and modern.  The Bensons have managed to make this title feel contemporary and familiar at the same time.  Great storytelling relies on great characterization and chemistry.  For a concept like Birds of Prey, it is integral.  The Birds could sit around a room and talk and it could still be the best story of the year.  It’s like that with this concept.  Maybe, because it’s a book that features all female leads it lends itself to this.  No matter what, this title has become great.