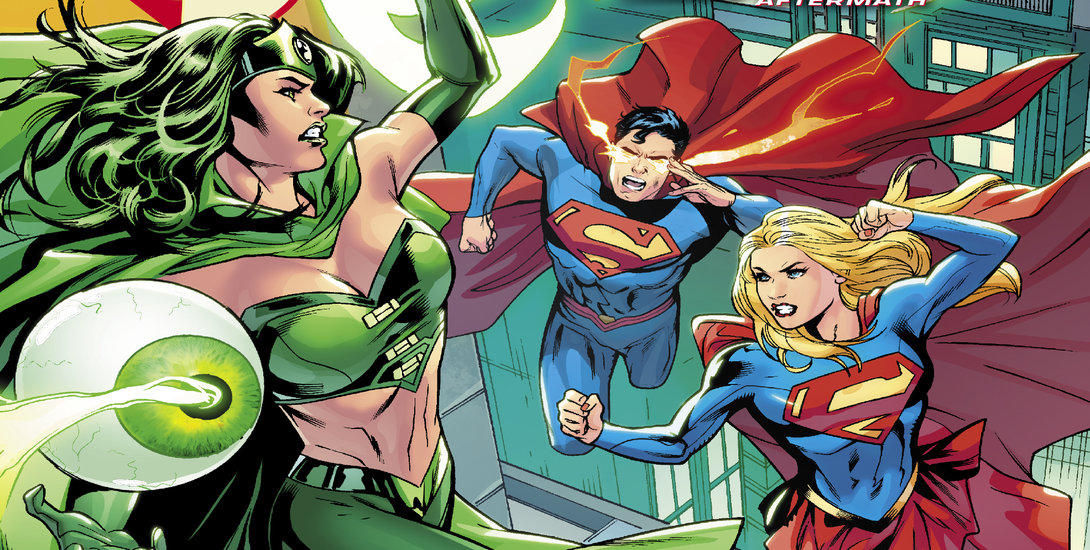 Summary
Supergirl gets some much needed family time, and battles a new foe in the aftermath of Superman Reborn titled “Family of Tomorrow.”

Positives
I hate to admit it, but there were not too many positives in this issue. The only positive that definitely sprung out of this issue was that Kara and her cousin Superman are actually acting like family. One big criticism that came out of The New 52 comics was that Kara and her famous cousin didn’t really get along, often fighting whenever they met. If you want to see a good example, just check out the second issue of the Supergirl New 52 series. One thing Rebirth has done very well is fix the mistakes of the New 52 run, and in this issue, we finally get to see the long awaited meeting between Supergirl and Superman. Orlando spent pretty much the entire issue exploring their relationship. Everything from fighting Emerald Empress, to relaxing and having a peaceful lunch in National City. Finally, ending the day by meeting Lois and Jon for supper, followed by a fun game of catch, which involved throwing the shuttlecraft across space. As far as I know, this is also the first time Kara has met Lois and Jon (Post New 52). It was endearing to see Kara interact with her cousin, and his family in this way. In some way, being with family like this humanises her, and makes her relatable to the audience. It was definitely refreshing to see this side of her.

I have always been a big fan of Emanuela Lupacchino, so I definitely need to acknowledge her cover for this issue. It is absolutely amazing, and the look of Supergirl reminds me so much of the Supergirl of the 90s era, which is never a bad thing.

Negatives
As much as I enjoyed Supergirl’s newfound relationship with her cousin, the writing in this issue was not very good. For starters, Supergirl and Superman are battling Emerald Empress, but somehow Kara already knows who she is. Not exactly sure how as this is the first time the Empress has ever graced this book, and the first time they’ve ever met. During the battle, Kara does mention how she read a DEO file on the Empress, and that’s how she figures out how to defeat her, but the only way any Supergirl reader would know who the Empress is is if they read the Justice League vs. Suicide Squad crossover series. Now that would normally be fine if there was some sort of explanation by Superman or the DEO as to the events of that series, specifically the role that the Empress played in it, but there wasn’t. Fortunately, I did read the crossover series, but I could just imagine that a reader who hasn’t might be confused.

Superman refers to National City as “The National” throughout the whole book. Not sure if that was on purpose to show Superman lacks of the Kryptonian language, or by accident, but either way, it didn’t flow very well in the dialogue.

There was also a page where Kara was showing Jon how by taking her glasses on and off, she changes her hair colour, which helps with her secret identity. I don’t recall ever seeing that ability in any previous Supergirl issues, but either way, doesn’t make much sense. A wig or simply staying with her blond hair and not changing the hair color would have made more sense.

The art in this issue was inconsistent. Some panels were great, while others were messy. In the page where Kara shows Jon her “glasses on, glasses off” trick, she appears in the previous panel as being in her Supergirl uniform and with her blond hair, but when she starts to show Jon her hair changing trick, she starts the trick with her brown hair and glasses and then removes them to show her blond hair. It’s just little inconsistencies like that that can deter the flow of the book.

Verdict
Not the best issue to date, which is too bad because with Superman being in this story, it definitely could have been fantastic if the execution was better. The bright side is that the person that was watching Kara in this issue could make for a very interesting story in the next issue.