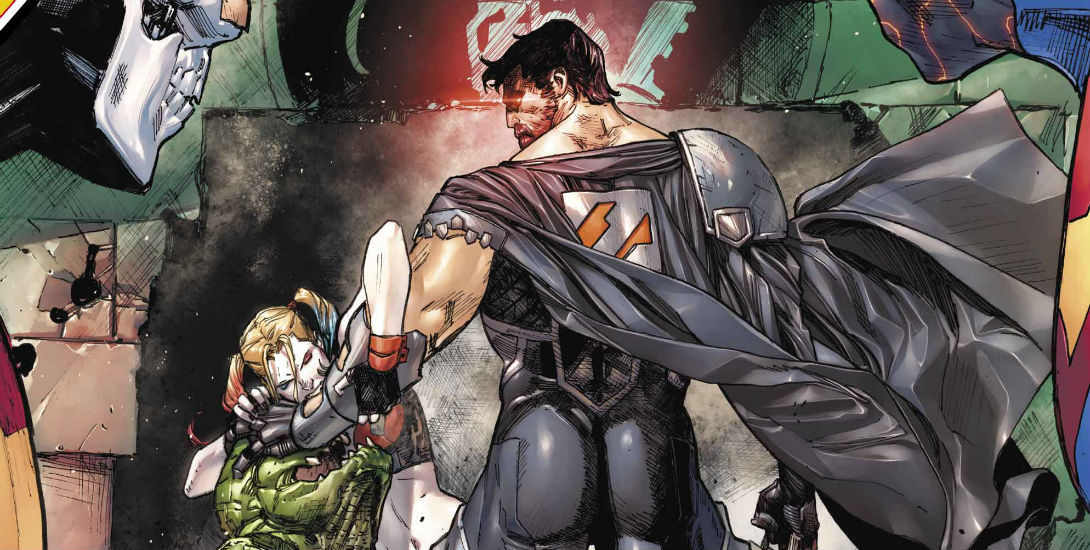 Having aligned the Eradicator, Mongul, Blanque and Metallo, Hank Henshaw, a.k.a. Cyborg Superman leads his  Revenge Squad to Belle Reve to break out Zod and add him as the final member of the team.  Meanwhile, Superman meets Jon and Lois at their new apartment in Metropolis.  He carefully lets Lois know what’s going on without revealing too much to  Jon.  Superman then goes to the JLA satellite to try and track the Eradicator’s unique energy signature.  Batman happens to be there and they discuss what’s going on.  It doesn’t lead to Superman asking for Batman’s assistance, but Batman is able to give his two cents on Amanda Waller and the Suicide Squad.  They are both at a loss, however, when they see a black energy field surrounding Belle Reve.

Superman flies off to Belle Reve in hopes of finding the Eradicator.  Upon arriving, he decides he must enter the black field and come what may.  Inside, he becomes disoriented and is quickly set upon by visions of those he loves accusing him of not being able to save them.  Clearly, this energy field draws on one’s greatest fears as a weapon.   At the same time, Henshaw is having a similar experience, but the Eradicator is unaffected because he is artificial life.  Henshaw and Superman have a brief encounter, but the Eradicator keeps them on course to find Zod, leaving Superman to face his fears in the form of zombie-like loved ones coming back from the grave for their own revenge on the Man of Steel.

Patrick Zircher’s art stands out as the biggest positive of this issue.  There is a timeless look to much of it despite the lack of red trunks on Superman.  Continuing to include the family element with Lois and Jon pushes Superman forward as a character and stands as a unique status quo in contemporary super-hero comics.  It adds diversity to the DC line and allows Superman to grow and develop in new and different ways that are in continuity and not simply an “imaginary” or Elseworlds story.  The zombie Ma and Pa Kent could provide an avenue for learning how they died in this post “Superman Reborn” continuity.

The Superman Revenge Squad is an older concept being revisited here with a different roster.  As such, it plays like something we’ve seen before.  While this particular group of villains does allow us some insight into what’s transpired in Superman’s past since the effects of the “Superman Reborn” story line, the villains teaming up for revenge on Superman feels too familiar.  Early in this run,  Action Comics addressed some unique situations, especially a new take on the Superman/Luthor dynamic which felt fresh and new as opposed to this current arc.  Unfortunately, it appears that Superman’s nuclear family could be endangered too often and become the new cliche replacing Lois as the “damsel in distress.”

Despite the familiarity of the Superman Revenge Squad’s motives and methods, this is a solid issue strengthened by Zircher’s art and the continuing saga of the Lane/Kent family.  To be a better story this arc needs either a greater emotional impact on Superman or present him with a significant psychological challenge, and there are a few seeds planted which could become fruitful.