DC Entertainment and Archie Comics are making a crossover! The six-issue crossover mini-series, which will be entitled HARLEY & IVY MEET BETTY & VERONICA, will be brought to life by an awesome real life team-up of Paul Dini (HARLEY QUINN) and Marc Andreyko (WONDER WOMAN ’77) with art by Laura Braga (DC BOMBSHELLS). The fun starts this October as the two best pals cross paths in Gotham City and Riverdale.

“It’s the sort of offer you scream out ‘YES!’ to before your eyes reach the middle of the email,” said Dini. “I’ve always wanted the chance to play in Riverdale, and to help Harley and Ivy invade it is a dream come true.  Marc’s a great talent and a good friend. Writing this series with him has been like sitting on the lawn during summer vacation and reading a big pile of DC and Archie comics.  Except we have to stay indoors and type a lot.”

“It’s going to be a blast to bring these amazing ladies together in this once-in-a-lifetime crossover,” said Braga. “Each character is different and special. While Harley is one of my favorite characters ever, Betty and Veronica are giving her a run for her money! I love all these ladies, and this book is going to be non-stop fun. ”

“When I got the call for this, I was in disbelief!” said Andreyko. “Getting to co-write with Paul on a series bringing four of the most iconic ladies in comics together under one roof for the first time? This must be what winning the lottery feels like! I cannot wait for readers to see what mischief Paul, Laura and I have dreamed up!”

HARLEY & IVY MEET BETTY & VERONICA will kick off when Riverdale plans a free college tuition for its residents. The town only needs to build a new campus by the draining wetlands between Gotham City and Riverdale.

The catch? Well, it just so happens that there’s a certain plant-loving villain.

Things escalate when Ivy enlists her BFF, Harley Quinn, and kidnaps Riverdale’s most important citizen, Veronica, with her best friend, Betty. We are counting on the mayhem, fun, and good vibes this crossover will bring.

“Betty and Veronica are the most iconic friends in comic book history, and now, thanks in no small part to the success of the Riverdale TV show, in pop culture,” said Archie Comics Publisher/CEO Jon Goldwater. “It made tons of sense to have them crossover with DC’s own female powerhouses, Harley Quinn and Poison Ivy. What you’ll get is a fun story that honors the history of both pairs and adds to it – which is what all great crossovers do. We’re excited by this partnership and we can’t wait for the fans to see what Paul, Marc and Laura cook up.”

“Two of comics’ coolest villains paired with two of comics’ hottest icons are what cross-publisher team-ups were made for,” said DC Entertainment Editor-in-Chief Bob Harras.

HARLEY & IVY MEET BETTY & VERONICA #1 will be available on October 4, 2017. Cover by Amanda Conner (shown below) and variant cover will be by Adam Hughes. 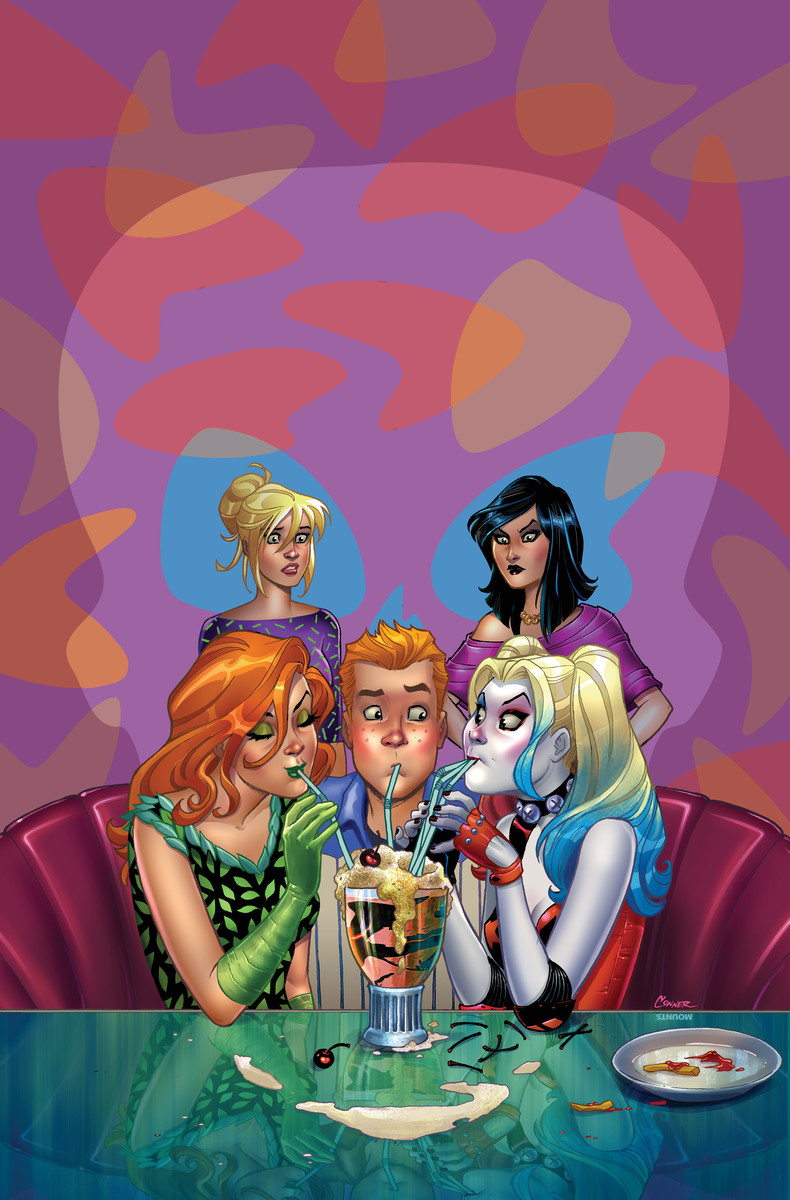