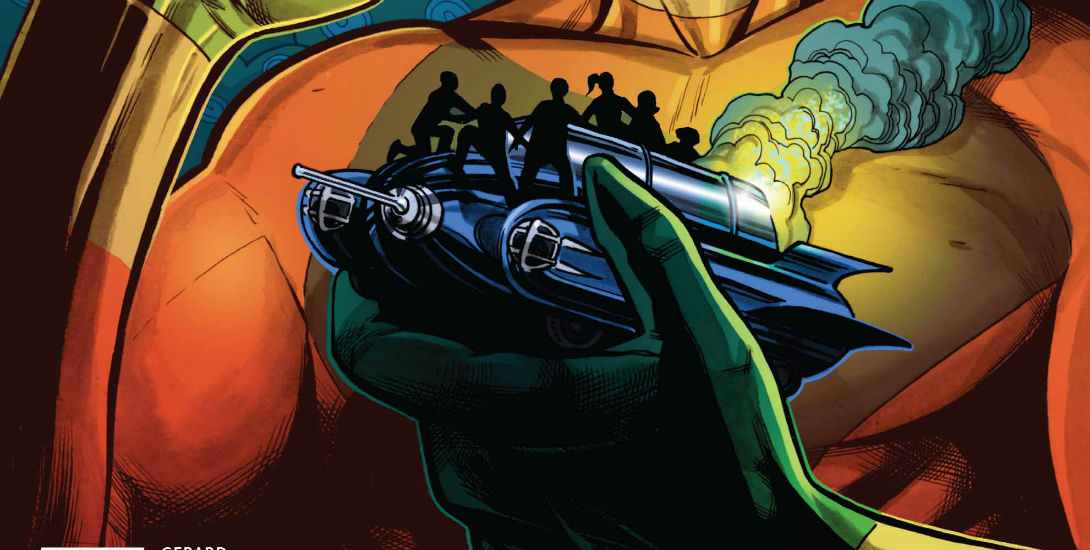 The Mighty Mole crashes, leaving the vehicle in an irreparable state.  Cave clearly has some feeling about this as he remembers the good times in the Mole.  Cave’s reverie prompts some questioning from Chloe which leads to Cave revealing that the Mole is where Chloe was conceived.  While a funny moment, it also reveals something unique about Cave’s attachment to Mole as well as a classic “too much information” moment for Chloe between father and daughter.

It doesn’t take long for the team to realize that the forest in which they have landed is alive.  Cave is still a bit out of it and has to be rescued by…Cave Carson, Jr.!  Nope, you read that right.  A time and dimensional traveling Cave Carson, Jr. is in this world searching for answers to defeating the Whisperer who is attacking his own world.  Luckily, the Batman of that world has created something that will help them now.  And it does.

Cave is stunned by the appearance of this son he doesn’t have.  Chloe is miffed at Cave’s reaction, you can almost hear her saying “Hey, dad, I’m your REAL child!”  It also doesn’t help that Junior’s mother is not Mazra, but Christine Madison, the woman from Cave’s original inside earth explorers.  They agree to work together and Junior leads Cave’s team back to his base and allies including Wil Magnus and the Metal Men.  Upon arriving, things shift and Magnus takes Cave’s cybernetic eye from him to power what appears to be a female robot.  But, who is it supposed to be?

This series continues to surprise and it truly is an adventure.  The original concept was subtitled “Adventures Inside Earth,” and Cave Carson Has A Cybernetic Eye takes us beyond Earth to other dimensions and presents an emotionally complex plot.  While Cave is haunted by his deceased wife, along the way he’s been tempted by the notion of another dimensional version of her and now a son he doesn’t have in his own dimension.  These challenges continue to develop Cave’s character and relationship with his daughter, Chloe.

The twisty narrative heads in a completely unexpected direction with the introduction of Cave Carson, Jr. and the plot to steal Cave’s cybernetic eye to power a synthetic woman – Mazra? Christine Madison?  But, that’s the freedom that comes with inter-dimensional and time travel stories, nearly anything is possible.

It’s also nice to see Doc Magnus and the Metal Men show up, though it’s still unclear if they will be antagonists to Cave since they are working with the other dimensional Cave.

About the only thing that seems to get away from the creative team sometimes is the size of the cast and visual cues.  I had to Google Christine Madison.  I thought I knew who she was, but I wasn’t 100% positive, a little exposition could’ve prevented the uncertainty.  It’s also not entirely clear who the other dimensional Cave is powering with our Cave’s eye.  Mazra?  Christine?  Someone else?

Cave Carson Has A Cybernetic Eye #10 is a fun romp that finds those emotional character moments that drive the heart of the series.  There’s no slow down as the team and plot push forward, with only a brief moment to catch your breath at the beginning of the issue and an eagerness for more with the surprise ending.  Keep ’em coming back!