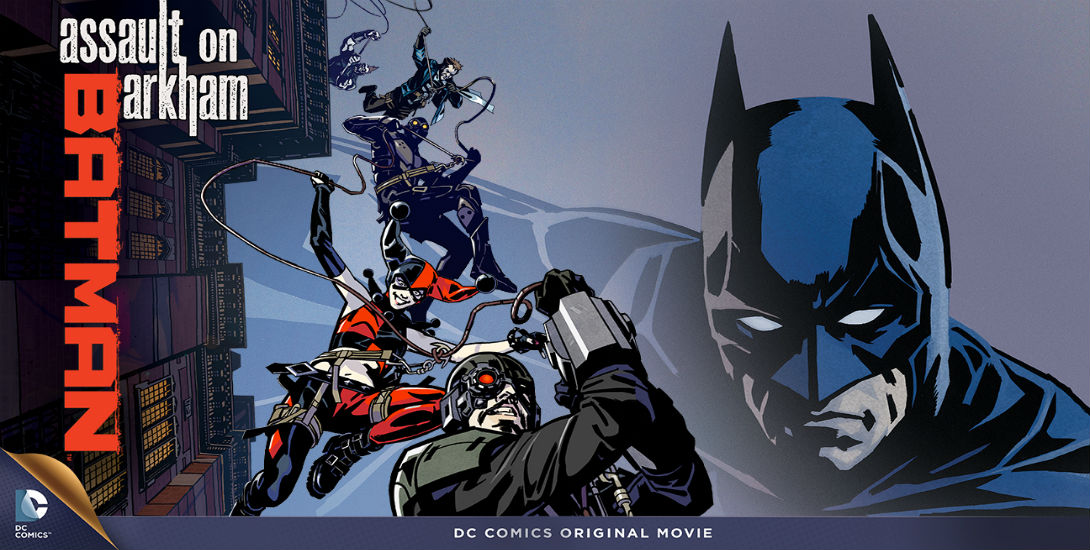 From the critically acclaimed and best-selling Batman: Arkham video game series, comes a spinoff animated movie focused on DC Comic’s worst criminals. When The Riddler steals intel from A.R.G.U.S., Amanda Waller assembles Task Force X with old members such as Deadshot, Captain Boomerang and Harley Quinn and with new comers Killer Frost, KGBeast, King Shark and Black Spider. They must then break into Arkham Asylum and reclaim the files Nygma stole from Waller. But things go haywire when they encounter The Joker and the Dark Knight himself.

The movie is action-packed, and filled with humor and all out chaos inside Arkham! It features fan favorite villains such as Deadshot, Captain Boomerang and most notably Harley Quinn and The Joker. The movie also features new faces, particularly if you’re new to DC Comics, and they all blend well together and complement each other’s personality. I like the dynamic between Floyd Lawton and Digger Harkness when it comes to competing on who is the best marksman. Also the dynamic between Killer Frost and King Shark is sort of adorable. They are like Beauty and the Beast, but in a twisted way. I also like the new voice actor for The Joker, Troy Baker. He provides a new feel, and along with it a nostalgic sensation that we are still hearing Mark Hamill’s voice. The story is great. It gives us a feeling that the animated film somehow still revolves inside the Batman: Arkham series. The movie also provides a lot of Easter Eggs from the game which will let your eyes feast.

It is such a shame that Black Spider and KGBeast were not utilized properly in the film. We know that Waller will make her point when Anatoli walked out on the team, causing him to lose his head, literally. And although Black Spider was used in the first part to infiltrate Arkham, in the latter part he was thrown away and easily beaten by Batman. Not that I’m complaining about Batman winning quickly, it’s just that Black Spider should’ve been utilized more. Aside from that, I have no problems with the rest of the movie

The movie was almost perfect. My only problem is the use of their characters. They didn’t maximize it, especially with KGBeast and Black Spider. In the film, there’s one moment that sticks with me. It is when Batman confronted Waller, telling her to shut down the whole Squad. In here we see two opposite sides fighting, not with their fists, but with their beliefs about what is right. Batman believes that Waller is risking more innocent lives when she’s using Task Force X. But Waller doesn’t see it that way. She knows that the Squad is what the world needs. She thinks that using the world’s worst convicts would bring peace to mankind, even if their methods are dirty. It is a typical mirror to our world today. The government uses things they think can help society, not knowing that their dirty ways can ricochet and hurt innocent lives.

Also while watching the film, I can’t help but notice its theme. I thought the revolving theme in the movie was just about trust, but I was wrong. The movie illustrates compromise. The Suicide Squad is a group of the worst of the worst criminals who are forced by A.R.G.U.S. to work together, and if they fail, their heads are expected to go sky high. In order for them to survive, we see each member compromise on what they want. In our society today, compromise is usually hard to do but usually its results are great. Compromise can help solve problems. Although we see the Squad compromise for a bit and accomplish wonders, it ended too soon when personal interests came through. Sometimes, to work properly as a group, one or two should compromise for the greater good.