FAN EXPO CANADA: The Flash’s Tom Cavanaugh on Movie Project with Grant Gustin and Even More Wells in Season 4 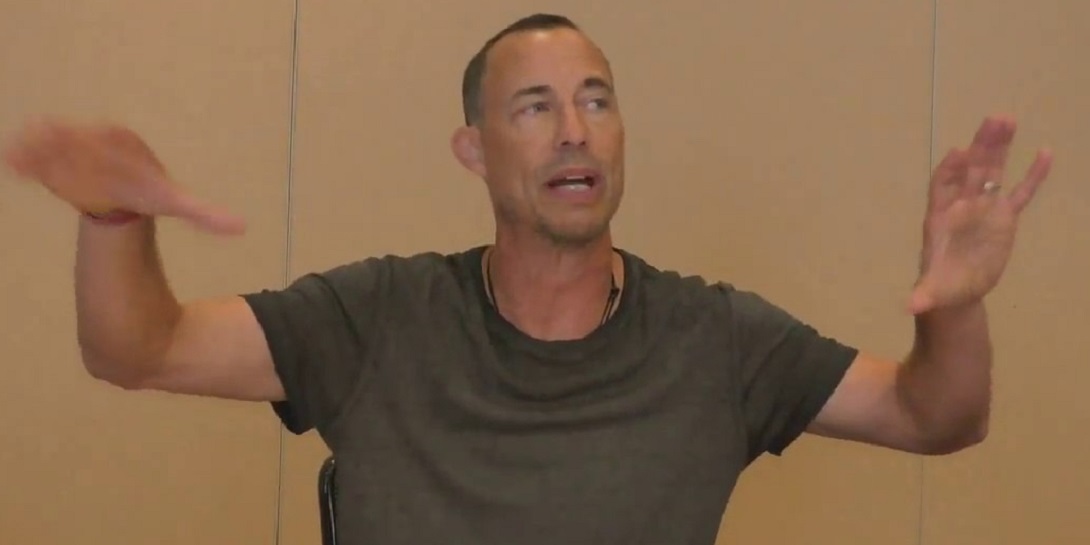 He’s been eviscerated, erased from existence, kidnapped by super intelligent gorillas, and impaled by a would-be God of Speed. In spite of multiple deaths, Harrison Wells – scientist or otherwise – just keeps on kicking throughout the multiverse. And his portrayer, Tom Cavanaugh, has the same amount of life in his step.

In the cramped Room 206B of the Metro Toronto Convention Center at Toronto’s Fan Expo this past Labour Day Weekend, Tom was warmly greeted on Saturday by fans of both his work on the NBC series Scrubs and the hit CW series, The Flash.

As a character created for the show, Harrison Wells has had an interesting history, having been portrayed by Cavanaugh at length in three different ways. The first, of course, was initially introduced as a benevolent scientific genius and idol of Barry’s turned wheelchair-bound pariah – his social status and physical disability caused by the fallout of  S.T.A.R. Labs’ particle accelerator explosion, which also birthed the metahuman community, The Flash included – who aids in training and guiding the fledgling hero. Of course, that version was gradually revealed over the course of the season as stranded villain Eobard Thawne, aka The Reverse Flash, determined to use Barry’s speed as a means to both restore his own powers and return to his original era. The second portrayal was the difficult Dr. Harrison Wells of Earth-2, or “Harry,” hellbent on rescuing his daughter, Jesse, from the evil speedster of his world known as Zoom. And last year, the team recruited the drumstick-twirling H.R. Wells from Earth-19 as Harry’s replacement, only to discover he was a bumbling failed novelist that was only that world’s S.T.A.R. Labs company face.

The latter, sadly, met his end at the hands of Barry’s evil timeline remnant, Savitar, in an attempt to rectify endangering Iris’ life by revealing her whereabouts by accident. Regardless of the iteration, the writers allowed Tom to add personal quirks in crafting each version.

“When I was creating the H.R. character,” Tom said, “when I do the different characters, I look for the thing we don’t have on the show and I try to fill that gap. [For season three] we thought what we don’t have daily is comedy, so that was kind of the reason for H.R. There were two things I decided to do. One was coffee; I like to drink coffee, and so H.R. drank coffee. And the second thing is we needed a tableau for the end of the season. All season long, I knew where we were going with that character and what his great sacrifice would be. But we didn’t want to talk about it. On our show, the thing I like the most is [a policy of] let’s show them and not tell them. [The audience is smart enough to] fill in the gaps. They’re gonna be way ahead of you, so what you need to do with an adept audience is stay ahead of them a little bit. [And so] the tableau was, we knew we were gonna [switch] Iris and H.R. and the way of revealing that, would be the drumsticks falling to the ground. Something you’d seen and absorbed all season long were the drumsticks and then at the end when those things fell, you wouldn’t have to go have Barry say ‘Oh no, he switched places with her.’ [That] was the main reason for them. The second reason for them was I like to bang on stuff all day.”

But, as it turns out, you can’t keep a good – or a bad – Wells down in the multiverse. Given the interdimensional plethora of possibilities, Tom offered a spoiler-free confirmation.

“[After the success of The Reverse-Flash and Harry Wells] I thought let’s do something different. And [since we now had the multiverse] that was the genesis of all these different characters. Last year we had a tiny piece of it when we went on a quest to what became H.R. Wells. We found Mime Wells, we found Hells Wells, Hamlet Wells. We had so much fun doing it, let’s just do more of that. And so, this season, we’re kind of exploring how shameless I can get.”

On the subject of his co-star, Tom has nothing but praise for Gustin’s abilities:

“Grant is a real rarity because he’s a younger guy. [Not] only is he a phenomenally-talented actor who doesn’t get enough credit for his ability, [but] there are lines there that he has to say [and] he’s got real ability. He’s colossally talented; he can make moments come alive that I think most actors couldn’t pull off. And because of all this talent, he’s getting a lot of attention and he remains as he was on the pilot: completely focused on trying to tell the story the best way he can. He doesn’t care about the acclaim or all the stuff that can unmoor you as an actor. It’s just very impressive to watch on a daily basis. [He’s] a real rarity and he’s going to have a massive career. He’s gonna be one of those guys who does a Spielberg war movie and the next thing and the next thing and we’ll be in a position where we say we remember him from [way back when].”

One thing that is concurrent on the set is the camaraderie amongst the cast, in particular in the area of music, as Tom, Grant, and Carlos Valdes aka Cisco Ramon can carry a tune. For the most part, with a five-day week and a nine-day shooting schedule, it helps kill time during the blocking of a scene in such a fast-paced series.

“[In between takes on the set in my trailer] Carlos and I will bring the guitar in and we’ll start riffing on whatever music we’re doing that day, and he’ll set up chairs and tables near the set. We’ll have a card table set up, people will kind of come in when they’re ready and we’ll either be playing music or we’ll be playing cards or we’ll be running lines if it’s a complicated scene. And then we’ll jump into the scene.”

Beyond the discussion on the shot, Tom revealed that there is a special project in the works that he and Grant have been working on based upon the horsing around in-between scenes on The Flash, tentatively titled Tom and Grant.

“It’s a bank heist movie by the two worst, inept bank robbers. And the genesis for that is, and I think Flash fans will appreciate this, is that we spend a lot of time goofing around. We always think that if anyone were to spoof The Flash, the best people [would be] The Flash people. We mock ourselves constantly. [That] kind of joking happens so much I started writing this kind of thing that was basically Grant and I play these guys on set that are Dumb Barry and Dumb Harry. They’re really dumb guys. There’s something I really like and I find it very attractive to find. One of my favorite things to play as an actor is the really dumb guy who thinks he’s really smart. And that’s what these bank robbers are like. It’s called ‘Tom and Grant’. It’s a heist movie; it’s not for family. There’s a lot of cussin’ and really, really R-rated stuff. It’s really, really, awful, and shameless.”

As to which Wells Tom favored over the bunch, he answered:

“I loved playing The Reverse-Flash. One of the things that you appreciate is he’s not just a sinister villain twirling his mustache. There’s a reason behind his method. He’s a guy that wants to get home, and to him, so many of the people he’s dealing with are already dead. He can’t help but feel affection because he deals with them. He needs Barry Allen to get home, so he has to protect Barry Allen so they bond. And it creates a more complex relationship than just enemies because he has to care for him, he has to take care of him, and then he has to use him to get home and kill him. It’s a complex character and it’s a blast to play. I can’t speak at all to what [Matt] Lescher does. To me, I’m Reverse-Flash. Flash and the Reverse-Flash are sort of a symbiosis.”

And no, Tom does not want to do a guest spot as Reverse-Flash on DC’s Legends of Tomorrow, which is where Lescher’s Reverse-Flash wound up last year as that series’ main antagonist for the season.

As for Season Four details, such as the upcoming crossover event across the entire Arrowverse spectrum – Supergirl, The Flash, Arrow, and DC’s Legends of Tomorrow – Tom remained mum, but did confirm the casting of Hartley Sawyer as Ralph Dibney aka The Elongated Man, albeit getting his code name wrong.

Season Four of The Flash premieres on October 12th at 8pm Eastern on The CW, and Season Three is now available on Blu-ray and DVD.