Blue Beetle unwittingly accompanies Teri Magnus—the Flash of the 31st century—into the future. It’s not a journey he wants to take, but it’s one that will unravel some mysteries—like why Teri’s been living in present day El Paso and working for Ted Kord. Plus, Jaime learns a shocking secret about someone in his own life! 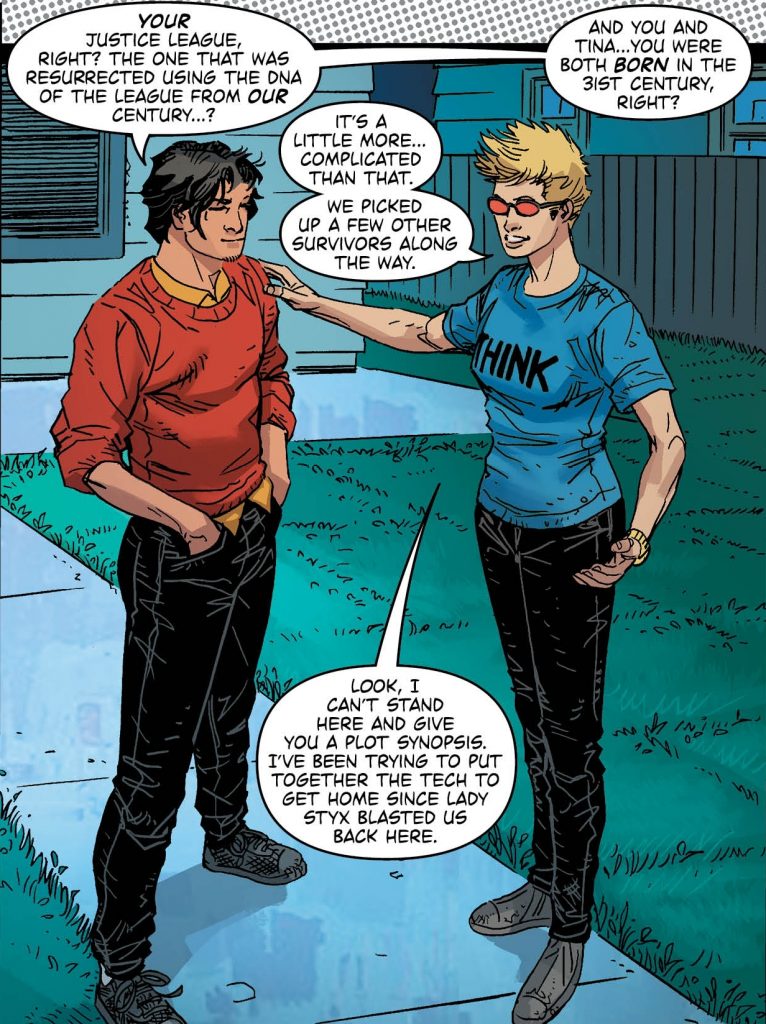 The Justice League 3001 was cancelled rather abruptly with little closure for the title. Teri and Tina, the future Flash and Batgirl were cast back in time to the current day DCU, where Teri ended up in the employ of Ted Kord.

Teri builds a Cosmic Treadmill and asks Jaime to use the Scarab to power the Treadmill, so that she and Tina can return to 3001. However, Jaime ends up accidentally traveling to the future in Tina’s place.

This allows Giffen and DeMatteis to finally depict the completion of the battle that was left unresolved in Justice League 3001. Jaime helps the League win that battle, but then he and Teri have to face Lady Styx (the arch-villain of the series), who drops a couple of major revelations.

Firstly, we find that Jaime already knows Lady Styx, who is his friend Brenda’s Tia Amparo, also known as La Dama. Secondly, Lady Styx tells them that she is Teri’s mother. 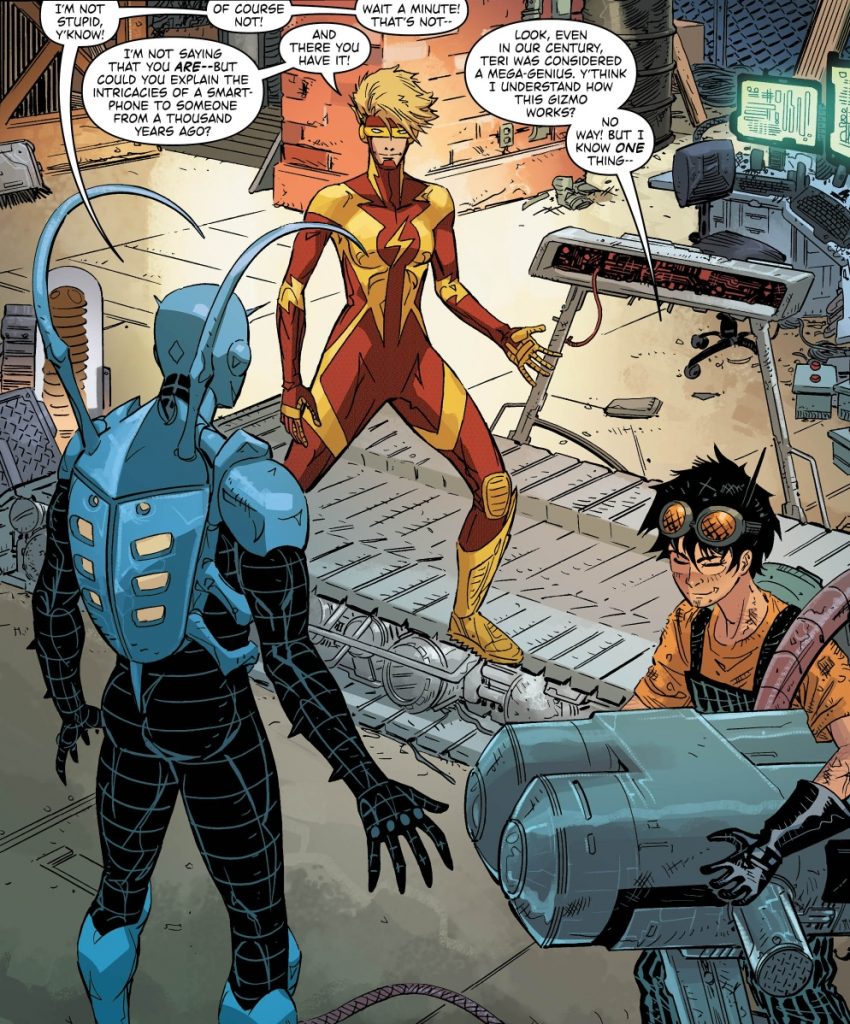 A lot happens in this issue, and it feels a bit rushed. I suspect that this arc was originally supposed to happen over a number of issues, but that Giffen and DeMatteis were forced to wrap the story up quickly. Even so, they still manage to convincingly wrap the storyline up.

Also, we know that Ted (as Blue Beetle) exists in the Justice League 3001 future as the Blue Beetle. This would have been a great opportunity to see both versions of the Blue Beetle in action together. Unfortunately, that team-up didn’t materialize here. 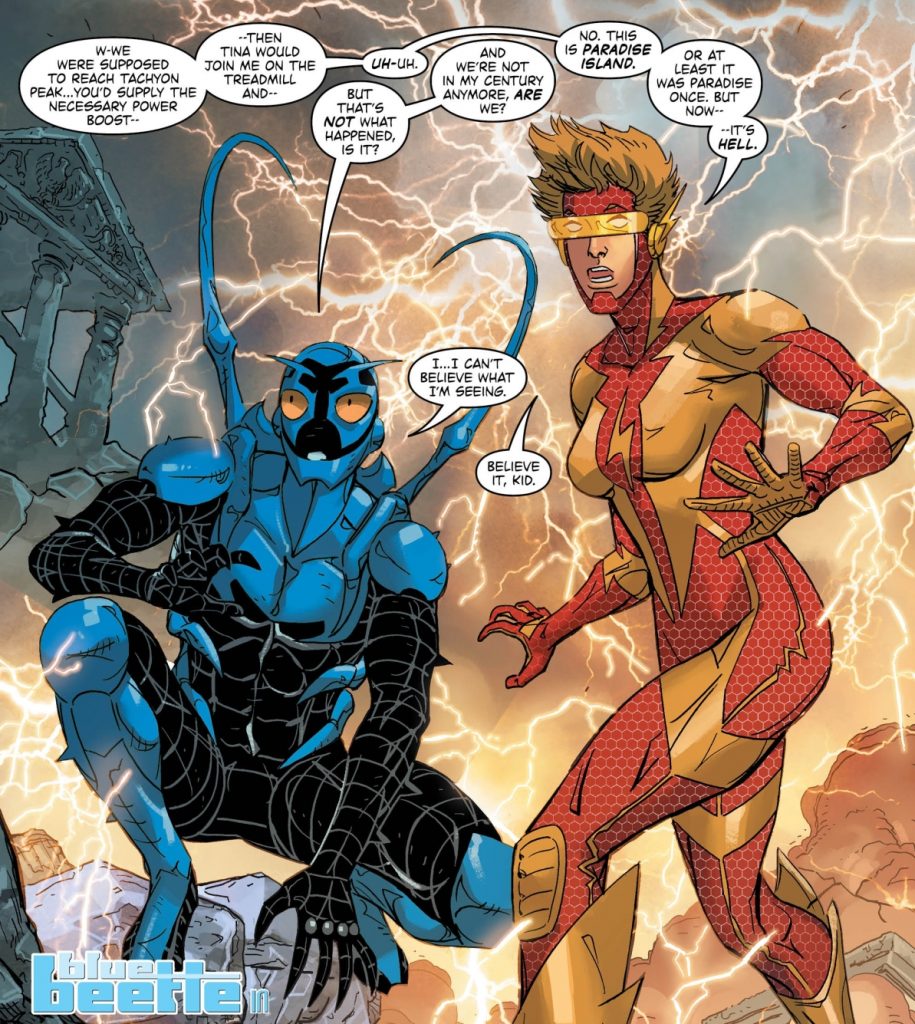 Also, the solicitations for the next few months indicate that Jaime is going on a trip away from El Paso, and therefore Ted, Teri, and Tina are unlikely to appear. I hope that the new creative team does not intend on permanently dropping any of them from the cast – especially Ted.

It has been a fun ride with Giffen, DeMatteis, and Kolins, but they are now handing the title over to a new creative team. I hope they can live up to the standard set by their predecessors.