As Cisco struggles to win the approval of Gypsy’s bounty hunter father Breacher, Barry and Team Flash must deal with another new metahuman in the form of Barry’s old rival, disgraced CCPD officer Ralph Dibny.

This episode takes a break from the Barry-Iris push-and-pull we’ve been offered up and focuses instead on both the introduction of a classic DC superhero and a hilarious “Meet the Parents” spin with superpowers. Tom Cavanaugh’s second shot at the director’s chair, the comedy is played up very subtle and doesn’t fail. When you’re introducing a human with the ability to stretch his body – initially without control – humor is needed. The hour-long sojourn of Joe’s keeping Cecile’s pregnancy to himself until he can process it is the running gag that wins every time. The Cisco-Gypsy-Breacher dynamic works thanks to the legendary Danny Trejo’s deadpan delivery; his “dead man walking” demeanour towards the man dating his daughter offers the perfect foil for Cisco’s character. At times it seemed like a live action Looney Tunes Elmer vs Bugs routine, but in a good way. The resolution that ties in to the main plot shows Cisco tapping into his inner George McFly to Breacher’s Biff Tannen and earns his respect. It shows that as a hero Cisco has come far. He’s willing to battle the father of the woman he loves to protect the life of a total stranger who’s only guilty in Breacher’s eyes due to a misconception. 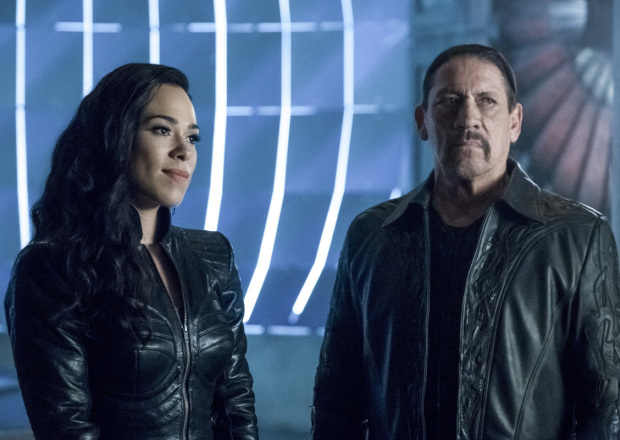 The characterization of Ralph Dibny deviates from the way he as portrayed originally in the comic to establish a parallel to Barry; in the silver age stories they were the same in regards to morals and approach but with different powers and costumes. This is a Dibny who has fallen from grace – and off the treadmill – since Barry busted him for planting evidence to further his career when they were on the force together. The moment in Barry’s lab where Joe notices that the news clippings and photos on Nora Allen’s murder shows how far he’s evolved. While Barry is a man who has conquered his demons and left them behind him, Ralph is an individual nearly consumed by them, evident in how he earns a slap from his female client. 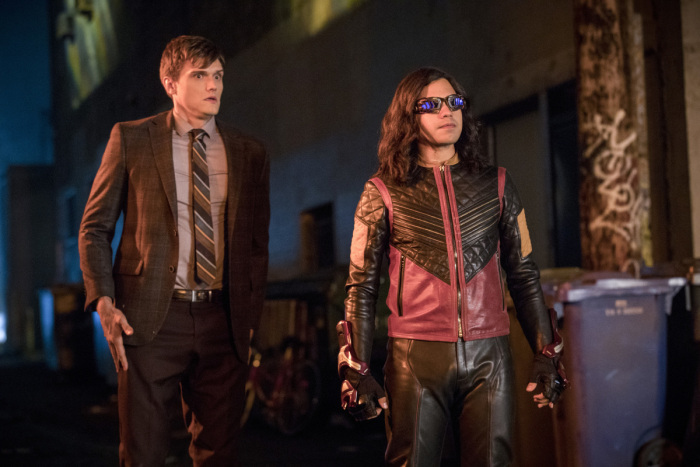 Hartley Sawyer portrays Ralph with the right amount of sleaze with a redeeming earnest about him, especially when he’s defending himself to Barry. His rationale is flawed and Barry delivers the perfect line that distinguishes the two: “Good people don’t ruin other people’s lives and call it noble.” For once, we see a Barry that doesn’t believe at first that Ralph is redeemable given their history and it takes Caitlin and Joe to point out his hypocrisy. Sawyer realistically sells Ralph turning over a new leaf in the middle of blackmailing corrupt Mayor Anthony Bellows, played by Flash alumnist Vito D’Ambrosio from the 1990s CBS series. Bellows, not seen since Season Two, offers a third parallel to both Ralph and Barry. This is a man who has had an affair behind his wife’s back and is remorseful, and yet desperate enough to both silence Barry and Joe and pay off Dibny after killing him fails. This is a man who has fallen and is willing to continue wallowing in the dirt to appear clean. The viewer can easily see Barry representing the man that Ralph can be, while Bellows embodies the man he’s close to becoming if he continues down this self-destructive path. 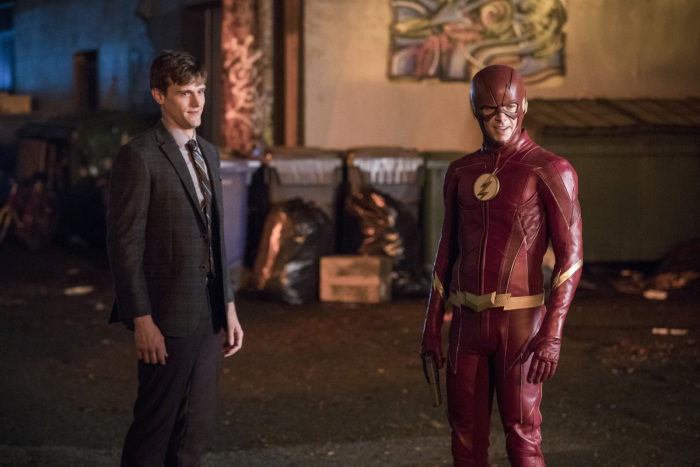 To see Ralph turn down the payoff and willing to walk is as much a baptism of fire as is his involvement in Joe’s rescue; it’s a subtle resuscitating of the cop he used to be, even if it’s just in his eyes. The effects for his powers are flawless and hilarious, especially the part where he sneezes and survives a bullet to the head. There are also subtle staples to Elongated Man’s characterization from the comics, such as Gingold in his drawer and the classic nose wiggle near the end. It will be interesting to see how far they can take Ralph regarding his powers and what his suit will look like. I also like how Ralph inadvertedly clues Barry in as to who’s behind the calculated maneuver involving his return and the empowerment of these new metas.

While I’m happy that there was a break in the Barry-Iris drama, I’m a little surprised that the a-ha moment in Barry’s flawed logic wasn’t pointed out by Miss “We are The Flash.” Harry seemed a little out of character in this episode; the man who is supremely antisocial is suddenly offering up Cisco advice on how to get Breacher on his good side seems a little unbelievable. If it’s a moment of growth for the character, that’s cool, but I feel that this was too soon for the character. It’s as if Tom told the writers to make him the voice of reason in this dilemma. 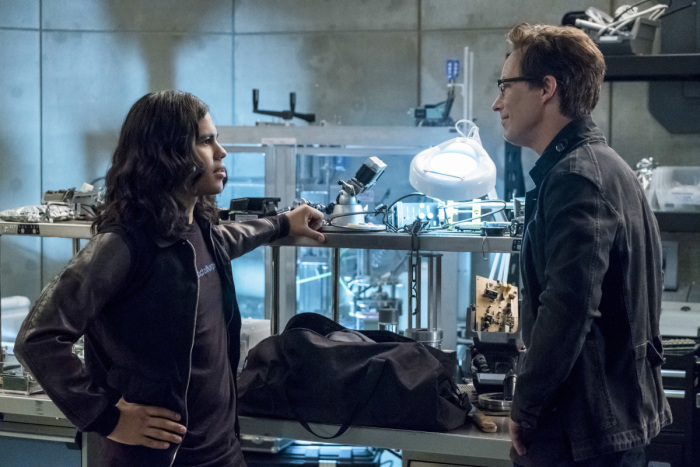 While he did get good laughs – his Bugs-esque “He went that way” to Breacher or his declaring Jesse off limits to Cisco – I just felt that this wasn’t the Harry Wells that reappeared last episode. While it was cool seeing Danny Trejo’s trademark badass in this chapter, I found some of his accomplishments and Terminator-like behavior a little cartoonish at times. He was almost too one-dimensional for this one-dimensional character. Hell, at times he even made Oliver Queen in Season One of Arrow seem like a Care Bear. I remember an episode from Smallville’s last season in which General Lane and Clark have a heart-to-heart after he’s won his approval to date Lois. The final scene involving all three players in this show only tapped into that by 10%. I guess what I’m saying is after a thirty-year career, I’m surprised the writers didn’t give Danny much to work with in this episode. 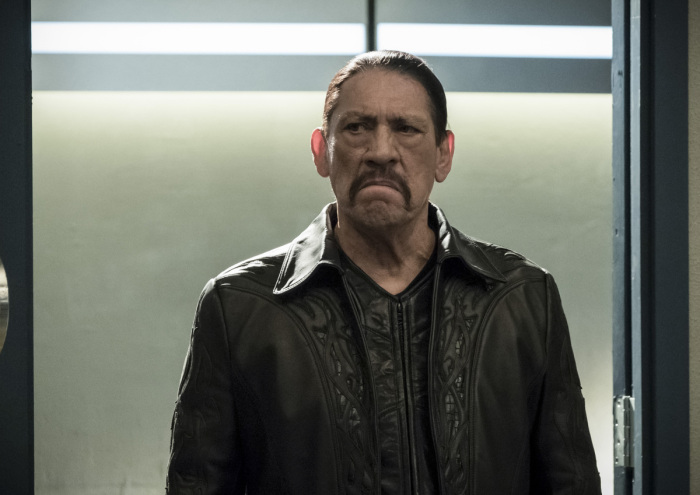 In the case of Ralph Dibny, many devoted fans of the show will remember Harrison Wells counting Dibny as one of the casualties of the particle reactor explosion. However, this is not a hole in the plot, as Ronnie Raymond, also on that list, reappeared shortly after as Firestorm, and we did have the time-altering Flashpoint last year. Both make it plausible that Ralph was not killed in the initial particle reactor explosion, just not empowered. However, there’s a part of me that didn’t feel that they should have gone this route. They could have had the disgraced cop angle, but they could have also had Ralph still be among the missing and using his powers as a private investigator under an alias for the past five years to redeem himself.

Lastly, that final moment involving Caitlin finding that scratched message on her front door could have been reserved for the prologue to next week’s episode.

What won me over in this episode were the nostalgic parts, the hilarious awkwardness regarding meeting a spouse’s parent, and the big laughs involving all the major players. No, the episode was not perfect regarding wasting Danny’s acting range and saddling Ralph Dibny with a pseudo-Plastic Man backstory, and Wells being too nice. However, we have foundation for both the evolution of Ralph Dibny into the Elongated Man we all know and love, and Team Flash cluing in on The Thinker.