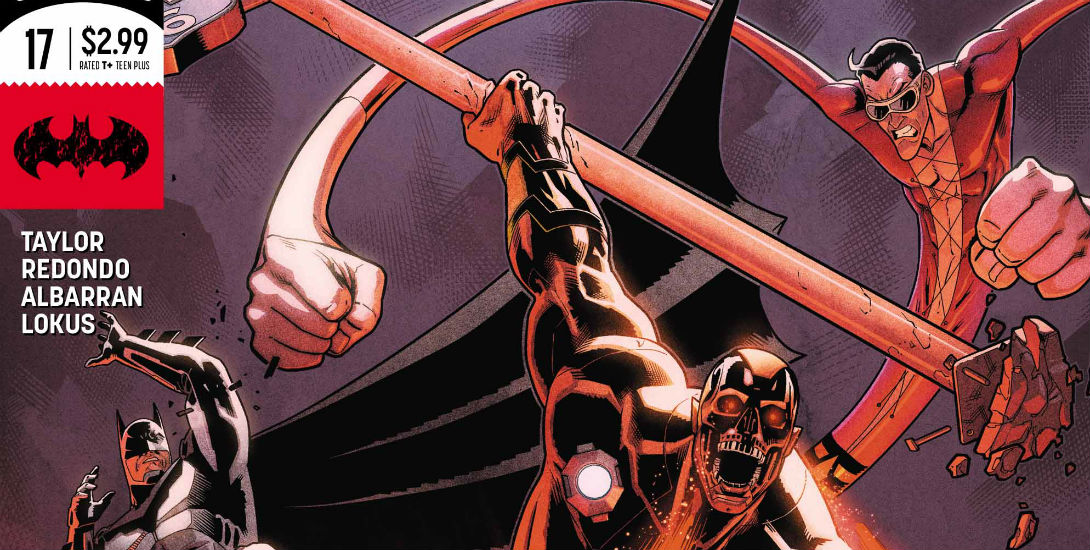 After spending a few issues with the Amazons, we are back to the main storyline with issue #17 of Injustice 2.  Harley has returned Lucy to Delia for safekeeping and then heads back to the apartment she was sharing with Poison Ivy.  Despite being on opposite sides, they share a night together before Ivy leaves early in the morning.

Ra’s has Professor Ivo working on a new Amazo under the watch of Solivar and Grodd in Gorilla City.  Back in Gotham, Brother Eye awakens Bruce and Selina with the knowledge of the death of everyone in a small town in Arizona.  Bruce gets Selina to stay in the manor to watch Alfred while he takes Batgirl and Plastic Man with him to the small Arizona town.  The three find a town with no human life, only animals, and they realize it’s Ra’s, but they aren’t sure why this town.  We know this was a dry run for the new Amazo.

Finally, there is one cat in this town that is sought out by a higher power – the Red Lanterns.  Thus, the origin of Dex-Starr.  Welcome, to the Red Lantern Corps!

This series has succeeded by being able to take familiar characters and concepts and giving them new life with new motivation or life story.  This issue does that for Dex-Starr of the Red Lanterns, all the while integrating this tale into the main narrative.  Despite an enjoyable excursion to Themiscyra, it’s good to be back to the main characters and the central conflict in this title.

There are some subtle moments that are indicative of the quality of this book in this issue.  Incorporating what appears to be a committed relationship between the Bat and the Cat, which echoes current events in Batman, is a nice touch.  But, it’s the underlying characterization that is really important.  Additionally, Bruce’s admonition of Plastic Man for wanting to bring his son along indicates a sensitivity rarely seen in the Dark Knight.  The horror in the small Arizona town is no place for Luke.

With Harley and Ivy, there’s a notion that’s being addressed casually that hints at a much bigger issue – How do people handle philosophical differences between one another?  Sure, this is only a comic book, but in today’s political climate, there are certainly friends that find themselves on opposite sides of the fence and they have to find a resolution to their opposing views.

We’ve gotten back to the main storyline just in time, as the “vacation” to Themiscyra could easily have changed the narrative line of this title.  There’s a lot of balancing to do with the scope of this story and cast of thousands.

Heading back to the central conflict is an excellent move at this point.  However, seeming like a simpler narrative, it has a lot of subtlety in characterization and thematic element.  Don’t be afraid to read a little deeper.  There’s a thoughtful reflection here that will seem familiar.  And, of course, Batman and Ra’s could’ve been allies in another life as well.