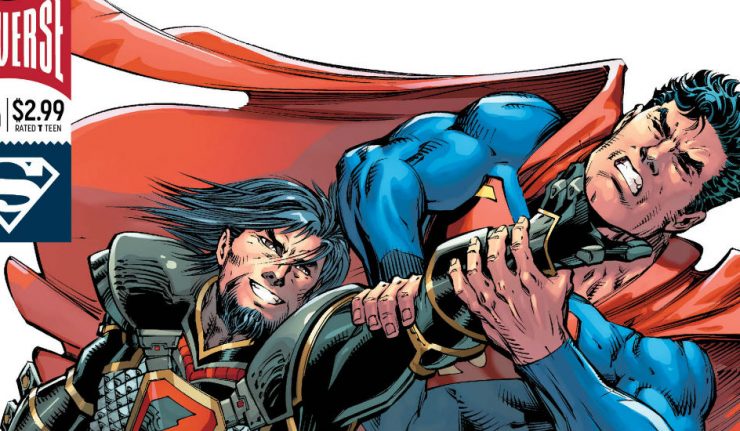 Lois finally shows what she’s got as her undercover mission begins to play out.  She parachutes out of an airplane and makes her way to her father’s holding place.  She’s not willing to endanger any of her friends in Logamba and this provides her the opportunity to show some bad-assery.  Lois doesn’t realize it, but Jon has followed her and is vigilant as he lays back.

Meanwhile, Superman, Booster Gold and Skeets figure out they are in the future on the planet Jekuul where Zod and family have founded a New Krypton.  (See Hal Jordan and the Green Lantern Corps #37 for more)  Booster and Superman find themselves confronted with Eradicators, and in trying to sneakily find a way to get some material needed to repair the time bubble, they end up coming face-to-face with…Lor-Zod!  Some readers will remember him as Chris Kent in the pre-“New 52” continuity.  He was essentially Superman’s adopted son until, well…his family caught up with him.

Now, Lor accuses Superman of abuse and is prepared to finish the Man of Steel….

Batman is a character that can easily wait and plan and choose the right moment to strike.  It’s nice to see Superman deficient in this area as he’s more than willing to punch something because he’s pissed off and just can’t contain himself.

This issue is also a great argument for a Lois Lane series.  We’ve seen Lois put her neck on the line before, but this is perhaps the most action oriented we’ve seen Lois in a long time.  While it may not make sense to drop Lois Lane out of an airplane every issue, there are lots of stories that could be told through Lois’s reporting in an ongoing series.

This story arc has incorporated a number of elements that are paying off.  While Superman vs. Zod is nothing new,

Superman vs. Lor-Zod is, especially since Lor was “Chris Kent” pre-“New 52” and Rebirth.  It’s not clear if those stories are still in continuity, but to anyone who has read them, this story presents an interesting conflict even if it’s only in the reader’s own mind.  It presents a whole different take of father and son than we see with Clark and Jon.

Lastly, the connection between this week’s Hal Jordan and the Green Lantern Corps and this issue is extremely effective for those that read both titles.  It’s not a crossover, but each issue informs the other.

Speaking of Jon, it’s nice that he’s tagging along with mom, but I hope Lois is able to rescue her father without his assistance, not because I don’t like Jon, but because I want to see Lois succeed on her own.  Back when Lois had her own title- Superman’s Girlfriend, Lois Lane–  during the ’50’s, ’60’s and early ’70’s it was more or less an excuse for Superman to show up and save the day.  Jon gets his moments in Super Sons, let’s let Lois have her’s here.

Uncannily, Dan Jurgens continues to surprise and entertain with new angles.   The Rebirth era run on this title commenced with some really interesting situations.  It became almost pedestrian with the merging of the two Superman’s and Lois’s histories.  With this story line, the title has achieved a new high watermark as the Super-family shines brightly as individual.  Time Travel is always a win and Superman and Booster Gold make for an interesting pairing. Oh, and Earth’s war with Krypton?  What’re you talking about Skeets?