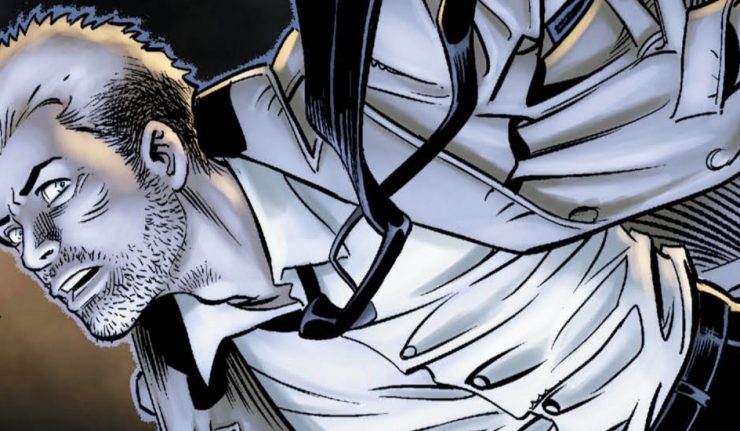 “The Bardo Score” finale! John Constantine’s latest foray into detective work is getting uglier every moment. Bodies are falling, there’s a gun pointed at him, and the stupid grin on his face is ruining his studied air of detached cool. Can he con his way out of this one?

I love the cover by Jesús Merino and Carrie Strachan. The line of skulls with bullet holes is a creepy and evocative image. I love the eerie green and the general tone of the cover.

The interior art features pencils by Richard Kadrey, inks by José Marzán Jr. and colors by Strachan. The art is solid throughout. The highlight is in this other dimensions. The art is slightly more surreal there with some neat colors; it’s cool.

The scene in the other dimension is hilarious. The dialogue is hilarious; there’s a casual nature to it that contrasts the environment and context of the story. It’s genuinely funny.

The issue is fairly anti-climatic. At the end of the last issue, I was excited. Two people had been murdered and Constantine was going to be framed for it. The leader of the coven was one of them and I figured this would turn them against Constantine. Turns out she is completely fine; it’s just a flesh wound. She was only shot and knocked out a window. The coven is on Constantine’s side the entire time and the murder charges for the actual dead person are easily swept under the rug. There are no consequences or obstacles that result from last issue’s great cliffhanger.

Additionally, the villains are beaten are so easily. I am impressed and glad that the story is done after three parts; that’s really cool. But it really takes no effort to take the bad guys down and it’s not really exciting at all.

This doesn’t quite work for me. The beginning is promising. The other dimension is cool and the scenes there are engaging and contain strong dialogue. But the rest of the story is a little disappointing; it doesn’t live up to the exciting cliffhanger at the end of the last issue. And everything just happens too easily for Constantine because it’s the last issue of the story. I usually want comic stories to be shorter but I think this could have used another issue to really raise the stakes.