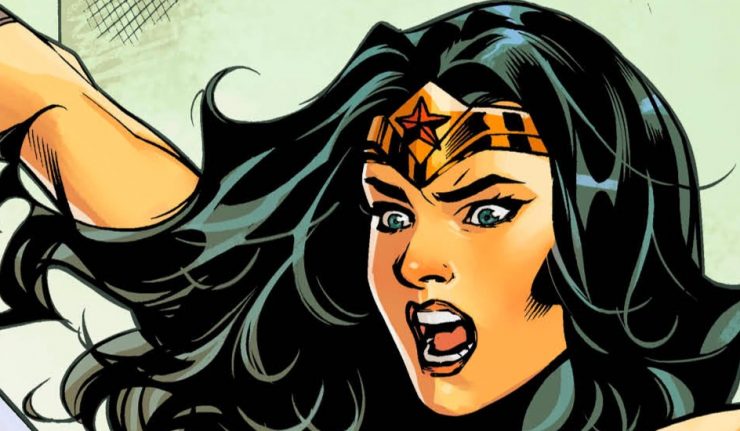 “SWAN’S SONG” part two! While Wonder Woman reckons with the savage descent of the young woman she put her faith in, her brother Jason is left wondering if Wonder Woman will always be there for him, or if a similar fate awaits him! And Steve Trevor hasn’t given up on the trail of Darkseid and Grail…unfortunately for him, it’s put him face-to-face with the Female Furies!

The cover by Paul Renaud is cool. Both characters look good. I like the small cuts all over Diana and the blood on Silver Swan’s hand; that’s a solid touch.

The interior art features pencils by Emanuela Lupacchino and Carmen Carnero, inks by Ray McCarthy and Carnero and colors by Romulo Fajardo Jr. The art is wonderful. The characters look amazing; they’re expressive and detailed. Everything pops, for lack of a better word, and catches your attention.

I like that Diana spends most of the issue trying to reach Vanessa. She’s clearly sick and Diana desperately tries to help her until she’s pushed too far.

While I like the fight itself, because it looks amazing, the dialogue throughout is off. I’m not even sure what my exact problem with it is. But none of it comes across as natural. There’s a lot of repeating the same lines over and over again and it all feels awkward.

I assumed we were done with Darkseid but I guess we’re not. There’s a subplot about Darkseid needing to reclaim his throne and I just don’t care. Silver Swan is a compelling villain and I was excited to see that story especially since the last issue was so strong. Randomly cutting to Darkseid feels pointless and kills a lot of the momentum for me. I imagine Darkseid will factor into the Silver Swan story and maybe that will end up working. But, in this issue, his inclusion is strange and dull.

This is an okay issue. The art is fantastic; the issue is worth reading just for this art. The writing is not as strong unfortunately. This disappointed me because I thought Robinson nailed the last issue and I was really excited about this story. The issue still works but I think it could have been better.