While Harley’s friends try to track down the antidote to change her back, the Gang of Harleys confront Harley and attempt to stop her from destroying an amusement park. 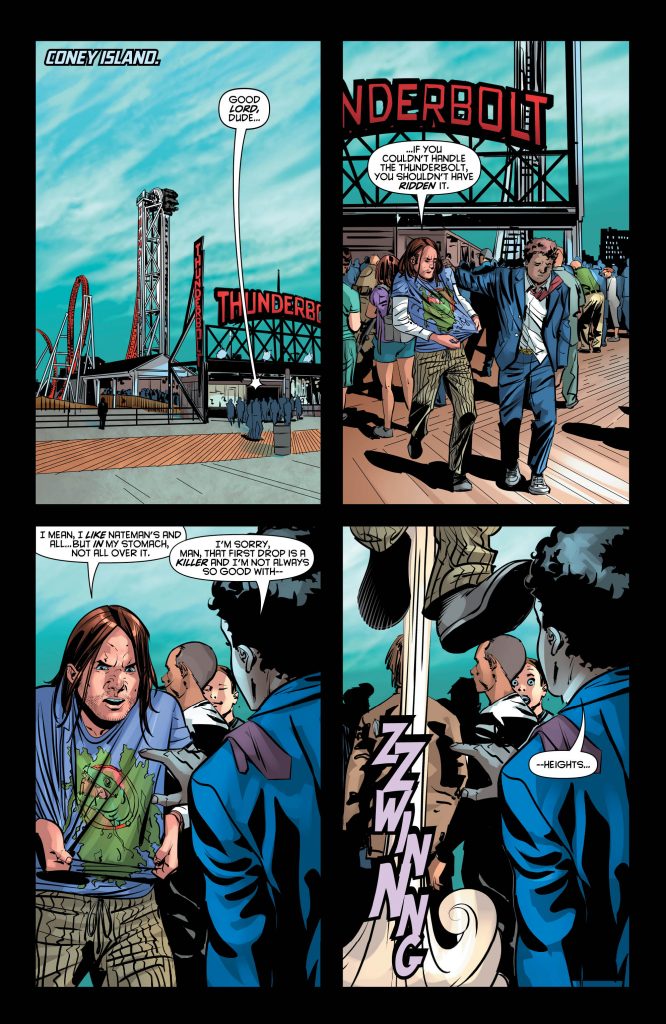 I have to admit, when I first looked at this story arc I wasn’t to convinced it would be very interesting. But by the end of the second issue, it’s certainly grabbed my attention. The main reason being is the roller coaster of a story that Tieri gives us, filled with pitfalls and sudden twists.

Harley once again shows incredible heart in this issue. Depressed and hurting after Mason’s death, she’s convinced that all her friends and followers would be much safer without her around, and goes to extremes to make sure that happens. This was a great angle as is really shows the softer side of Harley’s character, as well as how much the people of Coney Island, and her friends, mean to her.

The ending of this issue was a great twist. Without giving to much away, it’s something that will definitely make we want to pick up the next issue.

The artwork in this issue was very good. Action scenes were a bit to packed in some pages, but were still beautifully drawn and colorful, as was the rest of the issue. 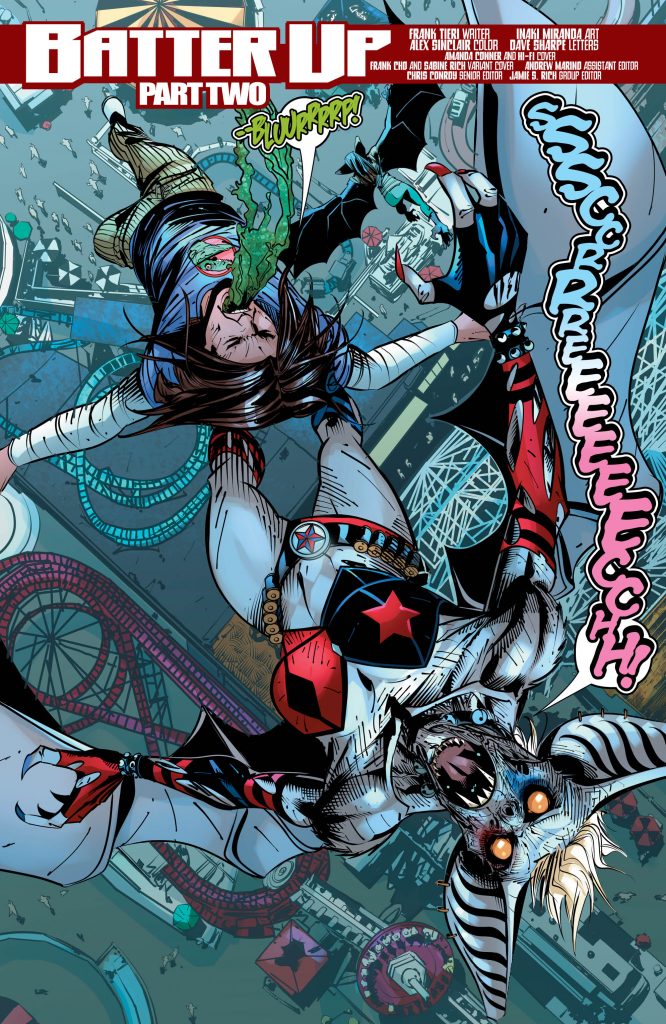 Just as the first Harley Quinn issue Tieri wrote, there was something different about his writing compared to that of his predecessors Palmiotti and Connor. For starters, the humor that made the previous books so much fun to read was gone. Palmiotti and Connor had a way with writing Harley Quinn. They were not afraid of poking jabs at themselves or society, and you can always count on atleast one sexual innuendo in each issue. Unfortunately, all that is gone, and although Tieri’s writing is still good, it’s not nearly as entertaining.

Palmiotti and Connor also had a way of writing Harley’s dialogue that really projected her Brooklyn style accent by using the proper accents and afflictions. Tieri does try in certain panels to do that, but it’s certainly not the same.

Lastly, the absence of Harley’s bestie Poison Ivy (aka: petunia). One aspect that I really enjoyed before Tieri took over was the relationship that Harley and Ivy shared. It’s only been a few issues without her, but already the series just isn’t the same. Once again, that aspect of entertainment, humor, and fun is gone. 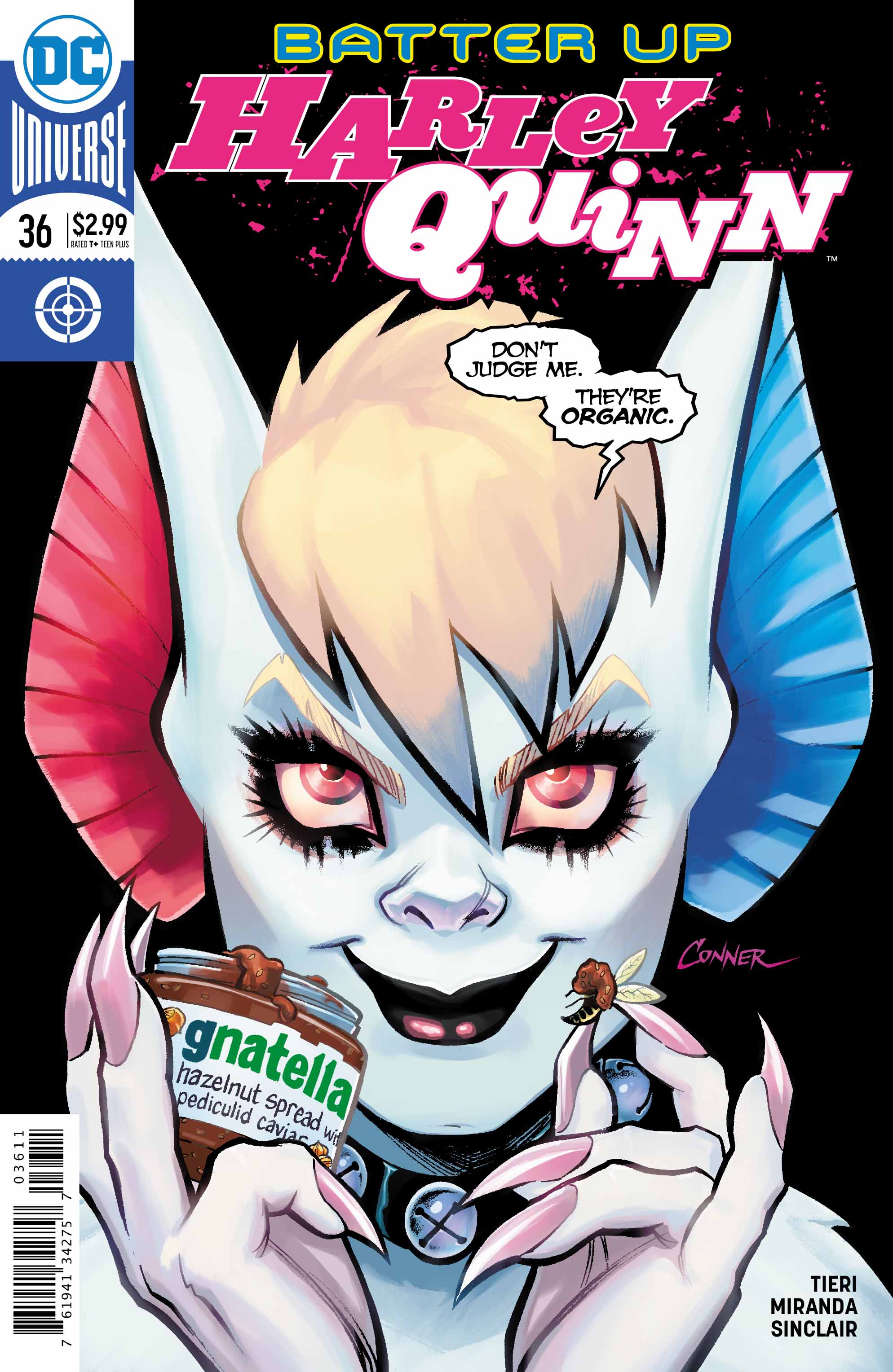 Despite all the negatives mentioned, this book was still a good read, unfortunately though not as fun or entertaining as it has been.