By trying to abduct the infant Naja-Naja, Bane has made an enemy of Kobra. And the cult won’t stop until he’s dead. A global manhunt for the Man Who Broke the Bat begins but he’s not one to run or hide. With his trusted comrades Bird, Trogg and Zombie he plots a strategy to take the fight to the underworld empire run by Valentina. Bane’s original creators continue their epic tale of mayhem, revenge…and conquest! 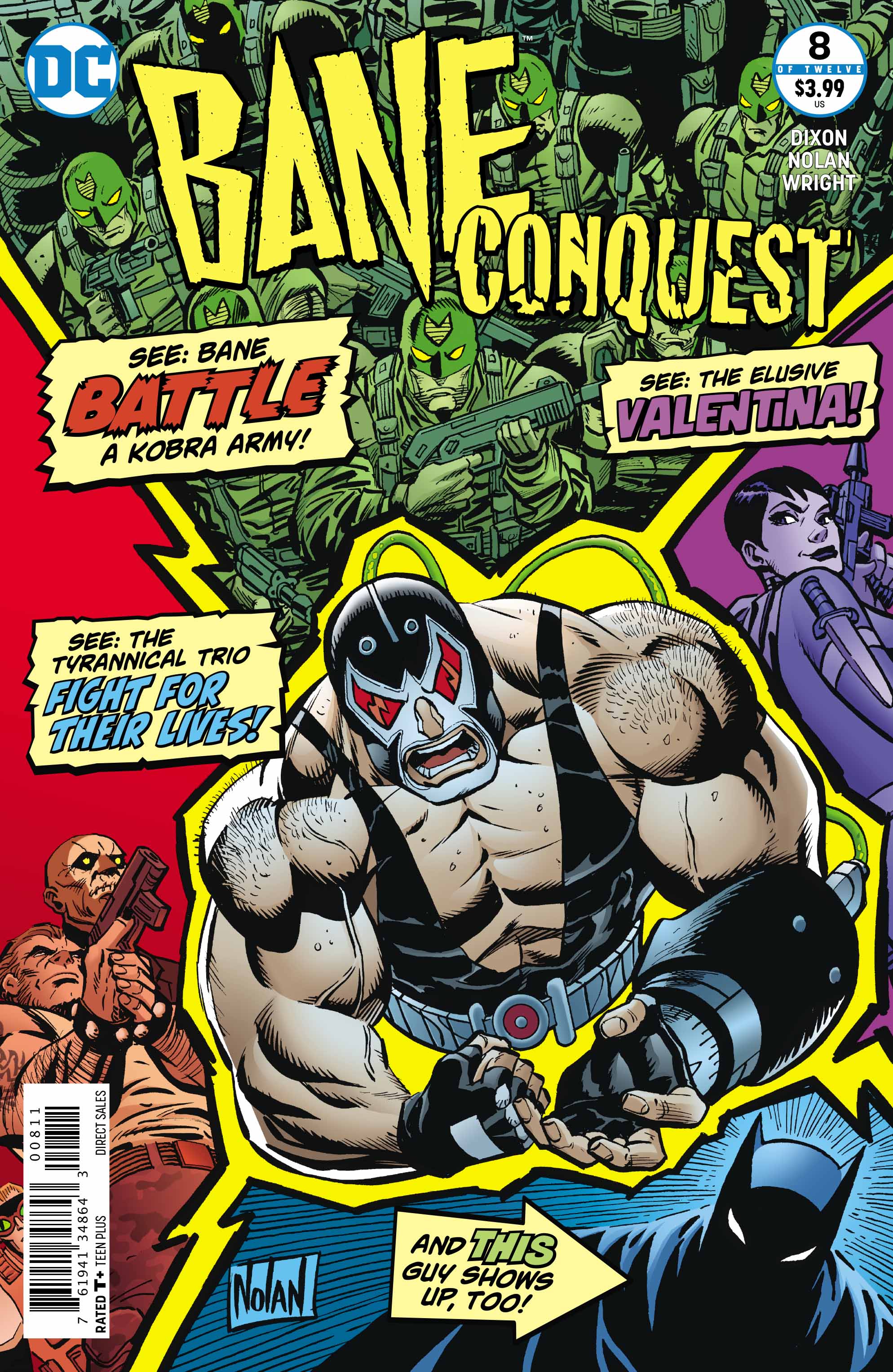 Things are starting to heat up in the war between Bane and Kobra.  The Naja-Naja may have slipped through Bane’s hands, but never underestimate him, for his brains mixed with his brawn is a lethal combination.  But Bane should be careful, because this Valentina chick is absolutely brutal.

As I’ve said in many reviews of this series, I absolutely love the relationship between Bane and his crew.  Most boss-type characters would tear down those who disagree with them or talk back in any way, but not Bane.  Bane respects his crew enough to listen to what they have to say and actually converse with them.  It’s refreshing to see in a comic.  Dixon does such a fantastic job writing these scenes.

We also got a couple of awesome cameos with Batman and an aged KGBeast.  We obviously knew that Batman would show up, as the cover gives that away, but I was definitely taken by surprise to see Bane seeking out Anatoli for his army.  This character has been getting more and more use lately with his small appearance in Batman v Superman and his much more significant role in The CW’s Arrow. 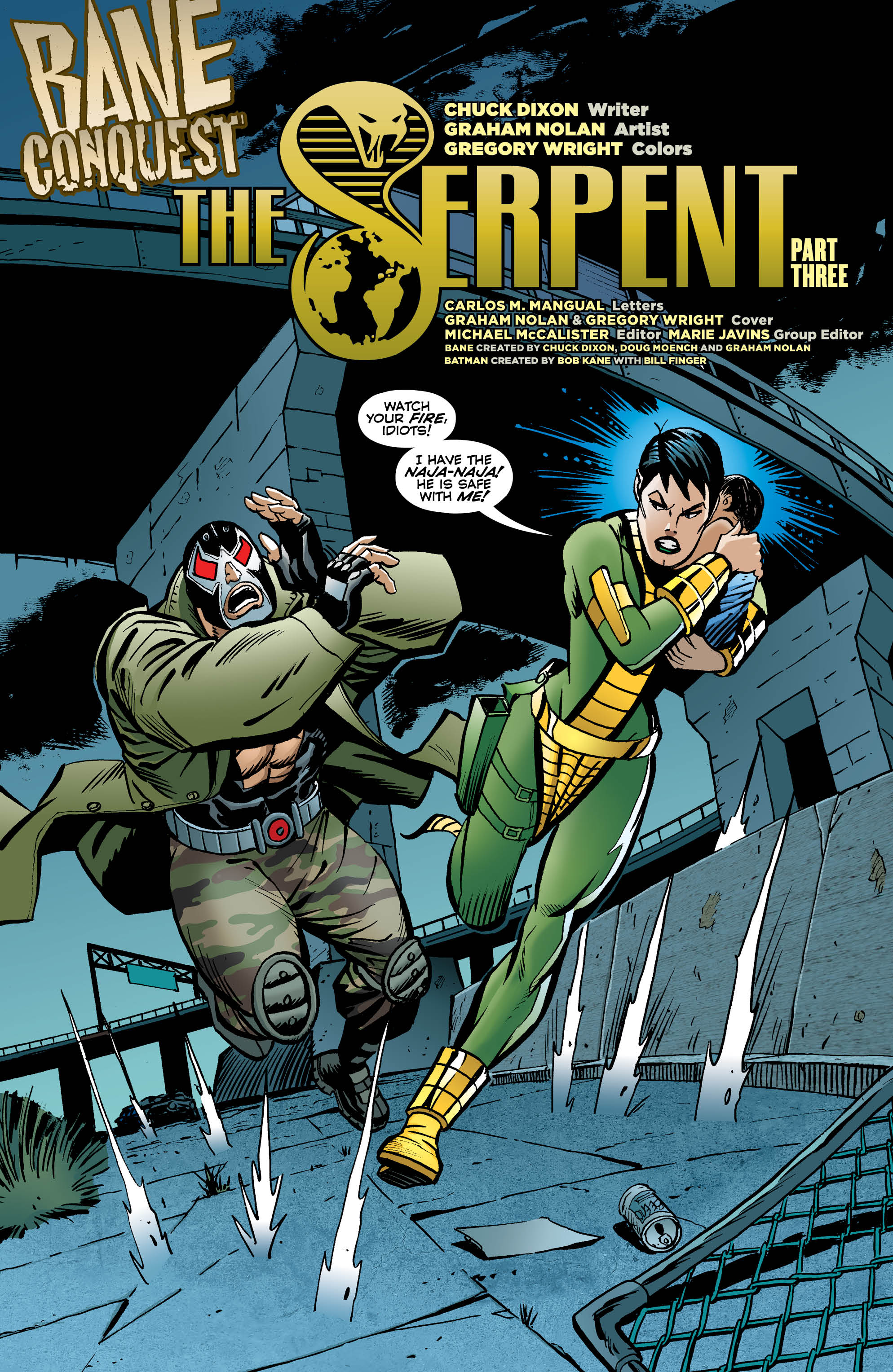 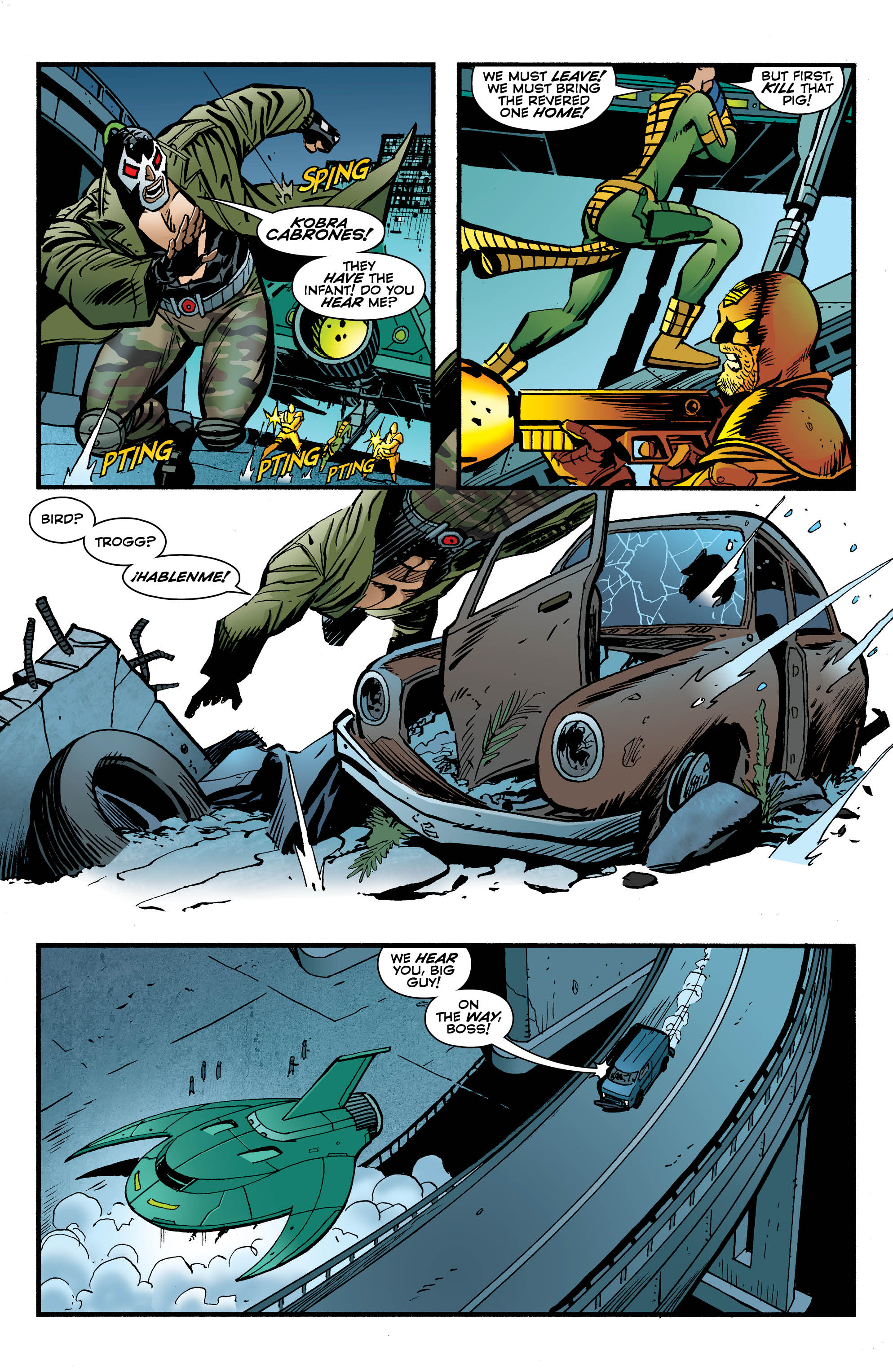 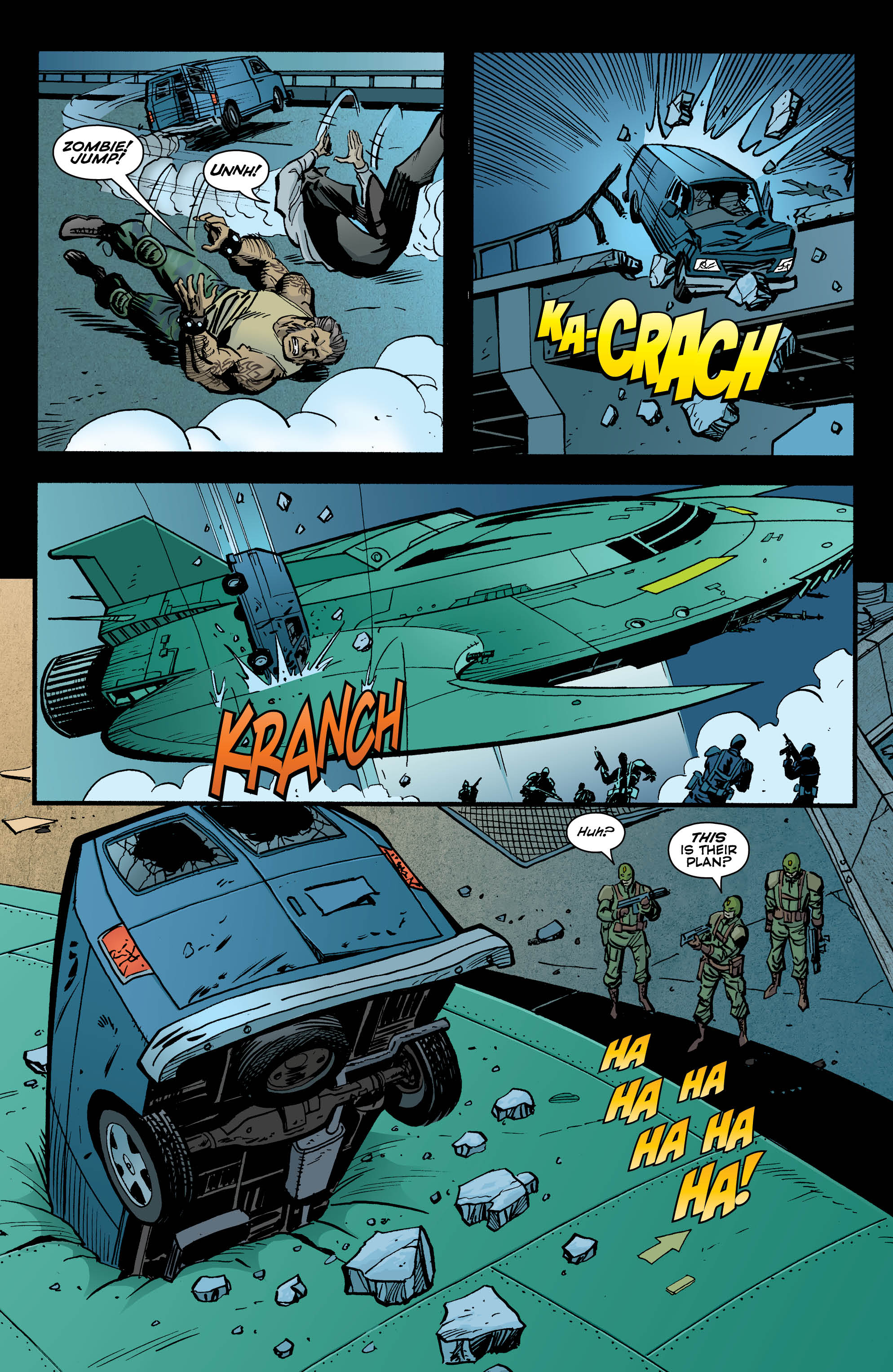 Also, I can’t talk about Bane: Conquest without highlighting the amazing artwork of Graham Nolan and Gregory Wright.  For starters, that cover is fantastic!  Nolan is one of the best artists I have seen, and it’s covers like this that reaffirm that for me.  And the super vibrant colors from Wright make the entire image pop.  This is a frame-worthy cover.  And my favorite image of the whole book is the half-page splash of Bane in the doorway looking for Anatoli with the snow blowing in behind him.  No one draws Bane quite like Nolan does.  It’s a beautiful thing to see.

The only negative I have is one that I have had in the past, and that is the fact that I don’t understand some of the Spanish dialogue.  I really don’t know much Spanish, and some of the lines go right past me.  It’s not a huge deal, just something that takes me out of the story for a quick second at times. 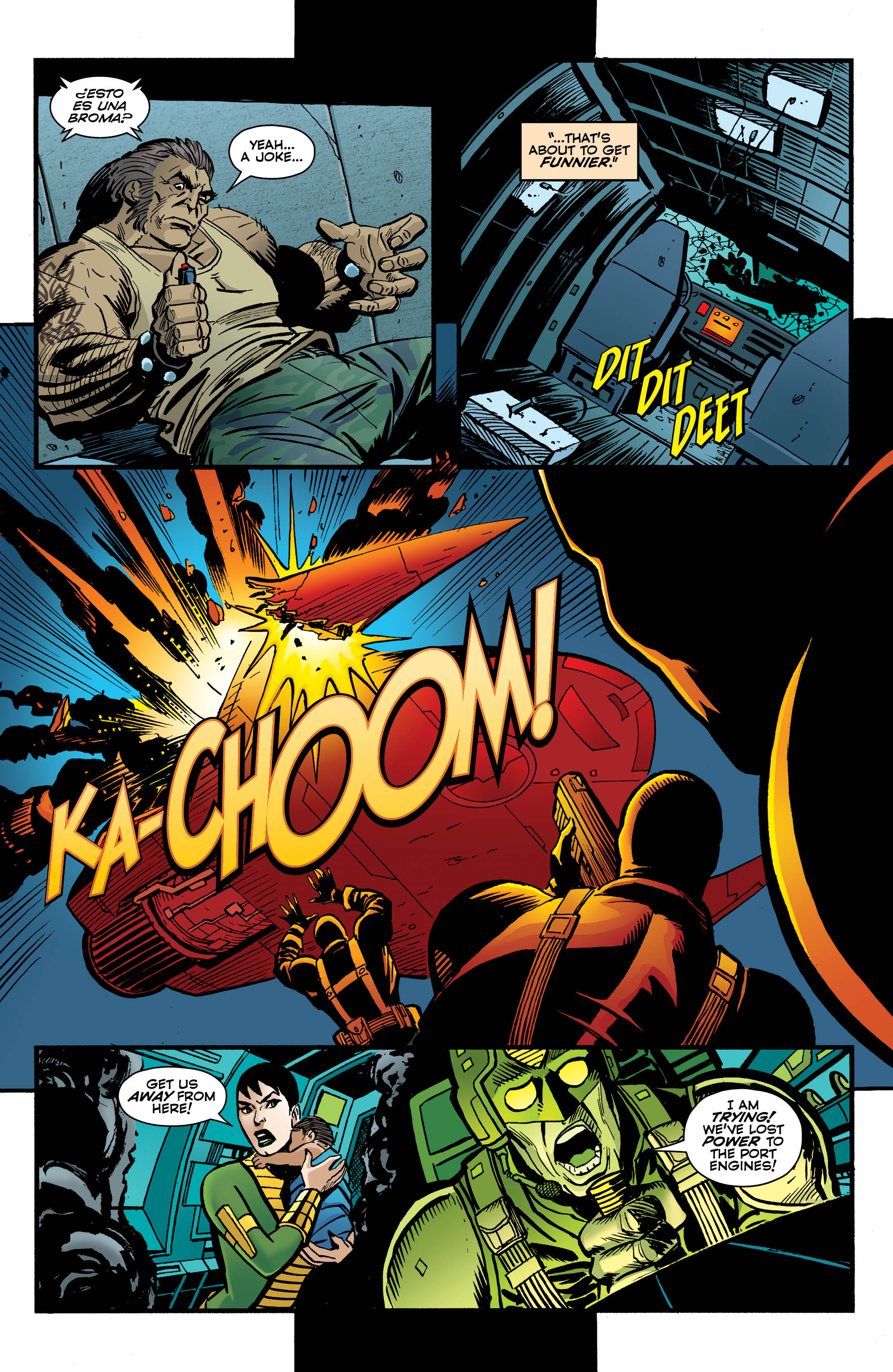 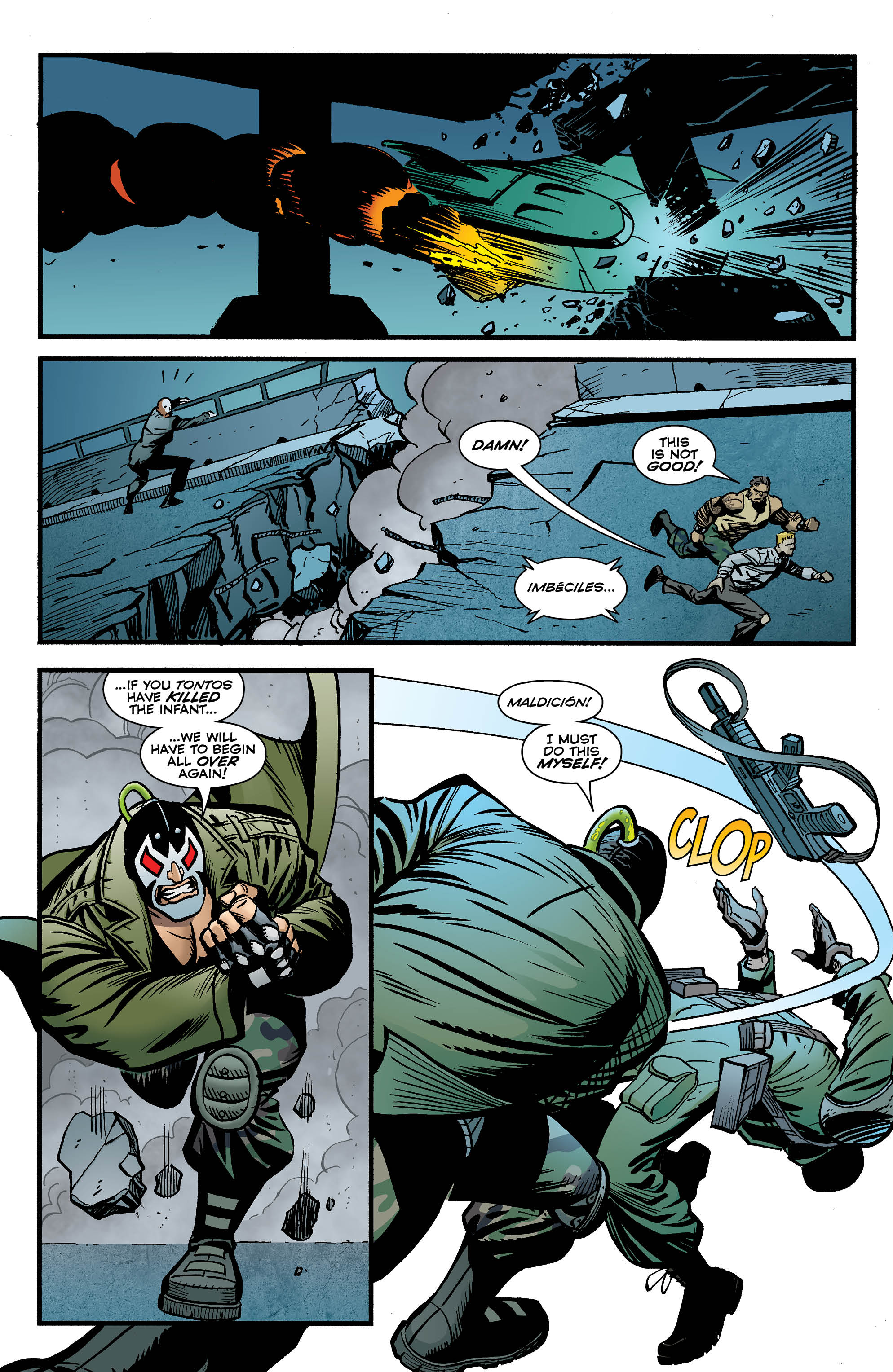 This was a great issue and it makes me excited to see what’s next.  There are only four more issues in this maxiseries, and I just can’t wait to see this war fully take shape.