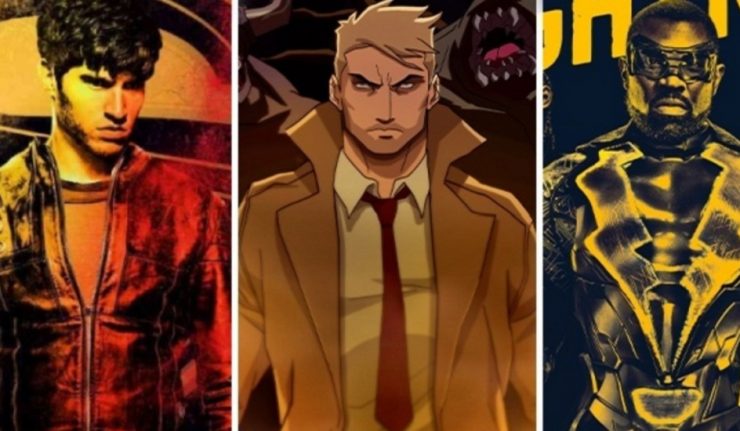 Warner Bros. Television and Warner Bros. Animation have recently announced their schedule for this year’s WonderCon in Anaheim, CA. Warner Bros. will be bringing DC’s Superheroes and antiheroes in both animated and live action to WonderCon 2018, set for March 23-25.

On Friday, March 23, from 3:30–4:30 p.m in Room North 200B, Warner Bros. Animation will present a Special Video and Q&A with the cast and producers of Teen Titans Go! including producers Michael Jelenic and Aaron Horvath, and Beast Boy voice actor Greg Cipes.

On Saturday, March 24 from 10:00–11:00 a.m. in Room North 200A, Warner Bros. Television will present the world premiere screening of the first episodes of CW Seed’s animated Constantine. Constantine actor Matt Ryan, as well as series writer J.M. DeMatteis and Blue Ribbon Content and Warner Bros. Animation’s Peter Girardi will be there for a Q&A session following the screening. The first season of Constantine begins streaming on March 24.

From 2:00–3:00 p.m in Room North 200A, Krypton stars Cameron Cuffe, Georgina Campbell and Shaun Sipos , along with executive producer Cameron Welsh and DC Entertainment’s Dan Evans will be on hand for a Special Video Presentation and Q&A about SYFY’s upcoming Superman prequel series that follows Seg-El (Cuffe) after he’s warned by the time traveler from Earth, Adam Strange (Sipos), leaving him faced with choosing whether or not to save his homeworld of Krypton or let it be destroyed the ensure the fate of his grandson, Superman. Krypton premieres March 21, 2018.

Warner Bros. Television will round out its Superhero line-up on Sunday, March 25 from 12:45–1:45 p.m in Room: Arena with an All-New episode of Black Lightning. The episode titled “Sins of the Father” will be followed by a Q&A with executive producer/showrunner Salim Akil with series writers Jan Nash, Pat Charles, Adam Giaudrone and Lamont Magee.

More info should be announced soon, so stay tuned to know what will be happening at WonderCon 2018.