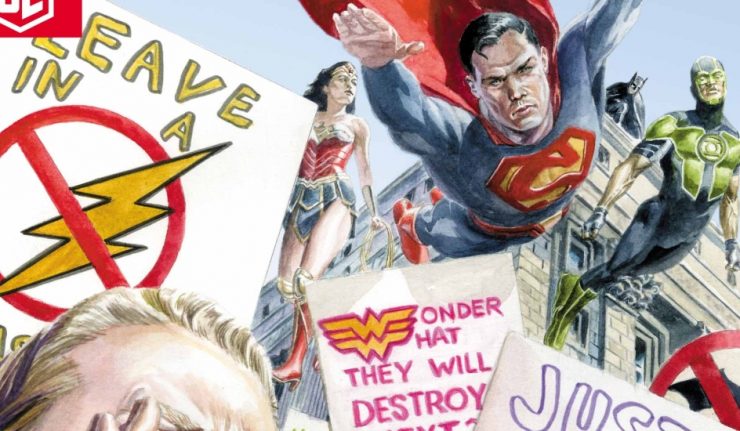 “JUSTICE LOST” part two! Trapped aboard the crippled Watchtower, the combined Justice League and Justice League of America teams clash over leadership and the urgent question of who can be rescued…and who will be left behind. Meanwhile, the Green Lanterns face critical choices over how to deal with the League’s two most powerful figures!

With both the Justice League and the Justice League of America facing the destruction of their satellite, question of who will give the orders to the two teams. The individual Leaguers are unsure of whether to look to Batman or to Cyborg to call the shots.

Although Batman asserts that the JLA will follow his decision, Batman in the end gives the final decision to Cyborg, trusting his own judgment in having chosen Cyborg to head the Justice League.

And the decision is a big one. The Fan has trapped on the doomed satellite, with no apparent way to save everybody, just a select few. After the Leaguers try to determine who should be saved, Cyborg  makes his decision: “Nobody gets left behind. We all survive. Or we all die.”

This issue managed to keep me wondering. When the Fan’s disapproval of the Watchtower is explained, it sort of made sense according to his twisted logic. He is “helping” the League by destroying the unnecessary satellite headquarters. But why would he then teleport the League onto the Watchtower? He wants to help them, not kill them.

But when the heroes start talking about how only the most powerful amongst them would be likely to survive the satellite crashing to Earth, I thought maybe he was trying to winnow out the weaker members to make the League stronger.

But once Vic decides that the will all live or die together and formulates a plan to save everyone, I realized that perhaps he was forcing them to sort out their issues and work together to save themselves – thereby making the two teams into a better functioning whole.

I also liked the new look that the Fan forced on Cyborg. DC should consider keeping this look for Vic. However, I notice that Aquaman has already reverted back to his standard orange and green outfit, eschewing the blue outfit the Fan gave him last issue.

Also, I love the cover’s homage to the old DC JLA/JSA crossovers. I fondly remember many of those crossovers and it was nice to see the same motif being used for this JL/JLA team-up.

We finally get an explanation for why the two Leagues seemingly ignored the poorer neighbourhood over a poorer area of Estes Park. Apparently, the wind was carrying a toxic cloud from the train crash towards the richer neighbourhood, putting it in the more immediate danger.

However, I don’t see why this information was withheld from readers until this issue. I can understand that the story requires that the general public to be believe that they were putting the lives of the rich first, but I don’t see the purpose of making it look that way to the readers. In any case, I am glad that we at least got am explanation for this.

The threads that Priest has laid down seem to be starting to come together. It’s hard to see where exactly the story is leading, but the League is facing a threat that is striking at the League’s fundamental reasons for existing rather than the usual physical threats the League is used to. This is a fresh take on the League that is quite captivating.