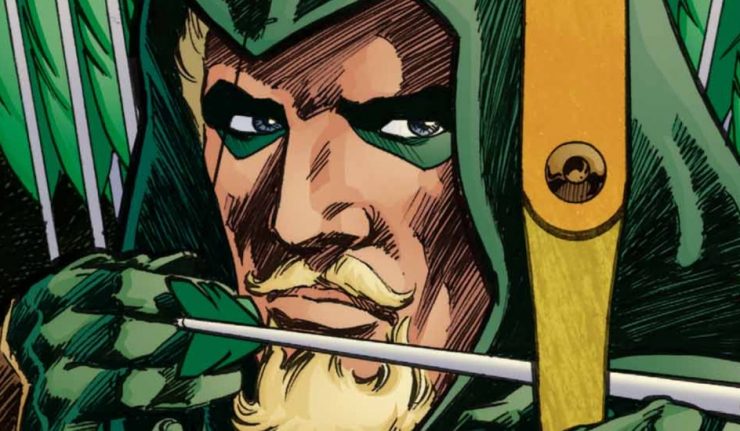 Oliver decides to defend himself in his murder trial.

The cover by Juan Ferreyra. I love this group shot of Team Arrow especially now that Diggle is back. Moira’s face looming large in the background colored in red is a really cool and foreboding touch.

The interior art, also by Ferreyra, is also great. It mostly takes place in a courtroom and there isn’t a lot of action. But Ferreyra is able to draw faces so well that the art still stands out; the art is dynamic and engaging. And there are cool moments in which Ferreyra gets to be creative and do some really cool stuff.

I like how integral Benjamin Percy makes “Rebirth.” These first 38 issues, plus the one shot, have all been about the rebirth of Oliver Queen. I love that Percy really committed to that. He tore Ollie apart of the course of this story and built him back up. For Green Arrow, Rebirth wasn’t just here to announce the end of the New 52. It was the story. I’m really excited to see where this book goes next.

I like that Ollie mending fences with the League led to this. I love that they came together to back him up. He earned his place in the universe; that’s really cool.

This is a great finale. There’s an optimism to it that I really love. Team Arrow, almost literally, went through hell and came out of the other side more determined that ever to help people. Maybe that’s cheesy but it’s the version of DC that appeals to me. Ferreyra’s art is gorgeous and it’s always a treat to see him draw the Justice League. This appears to Percy and Ferreyra’s final issue and while I’m sad to see them go, they told a great story and this is a good note to go out on.