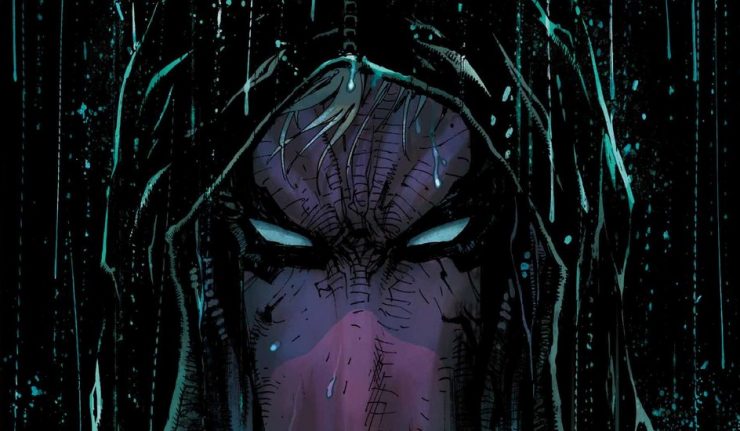 Finally! After weeks of pulling the story along at a snail’s pace Ellis treats readers to a payoff. Marlowe’s team attack IO’s Hightower while IO attacks Skywatch. There’s a reason the past few issues have delivered so much exposition, to make fantastic issues like this one possible. The story is a thrill from start to finish.

Where to start? Everything about this issue feels amazing. The dialogue has certainly been reduced this month of favour of action. Not that there’s anything wrong with dialogue but the past few issues have felt more like essays than comic books. Thankfully those issues pay off this month. Jon Davis-Hunt is on top form here with many panels to play with. 3×3 panel pages are used perfectly to push the story forward at a near break neck speed. This issue is reminiscent of the earlier issues in the series that way.

Every character has an important part to play this month. While names are still a bit of a struggle for me, I’m not confused by anything. There aren’t any scenes that leave me googling characters to try and piece together what the conversation I’ve just read meant. Everything makes sense and more importantly, flows. Flow is a good word to describe this issue. It’s hard to put down. Ellis blends the action into the dialogue like only he can. While one page may feature a tense conversation, the next might be an over the top fight scene and neither feel out of place being beside one another. This is because Ellis paces the issue perfectly. Throughout there is a real sense that this issue specifically is what we’ve been building towards.

With that said Ellis still does a great job of keeping readers invested. Given the filler issues of the past it’s easy to assume we’ll slip back into the same slow issue after slow issue but with the ending of #12 Ellis hooks the readers yet again. Without giving too much away, the ending makes all the endless conversations make sense while also staying close to the themes of the series.

Special mention deserves to go out to Jon Davis-Hunt. It’s expected of him to deliver beautiful artwork but the amount of detail he packs into these little panels is especially worthy of note. Even if the story is lost on you by this stage the artwork is always special.

There’s one major problem I have this month. The issue features a lengthy conversation about the word ‘explody.’ It’s not funny at any point and just makes Ellis seem out of touch. Is this what he thinks passes for humour now? While the rest of the issue is great this one specific sequence jumps out for its cringe inducing dialogue. What’s worse is that this is a call back to an early issue, and the word ‘explody’ sounded bad then too. What scares me the most is the thought that this will become a recurring joke in the series. Maybe I’m too cynical and maybe others will get a laugh out of it. But when I read about characters joking about how cool the word ‘explody’ is I half expect to see ‘xd’ in the speech bubbles too.

Ellis and Davis-Hunt return to top form with a fantastic issue that delivers on all the build-up. The writing is witty, for the most part, the story is well paced, the action is fierce and the artwork beautiful. There’s very little to dislike this month.