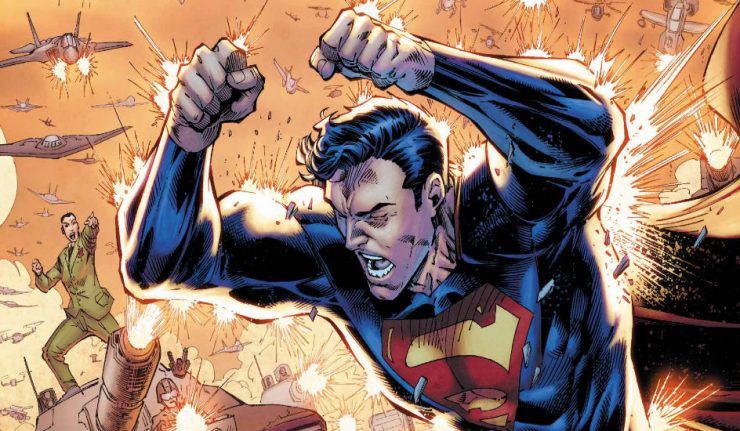 “The General”! Superman’s journey through time has crashed to a halt, and at the end of the line General Sam Lane stands face to face for the first time with his grandson, Jon. Buckle up, because the most awkward super-family reunion in history is about to begin!

This issue features character in the forefront as Lois, Sam and Clark all get great moments. Perhaps, the greatest triumph is Jurgens’ ability to portray the complexities of all three characters. Lois and her dad fight because they are so similar and they at times have some differing views, but it doesn’t mean they don’t feel pride in each other’s accomplishments. This is a very real world situation, especially between parents and children.

Realizing that the Phantom Zone may not be the most humane imprisonment after all provides an interesting change to the status quo of this device. Superman has clearly been affected deeply by his recent encounters with Mr. Oz and the future House of Zod. A virtual world as a prison is prescient solution as our world’s technology suggests something like this may be possible. At the same time, Superman does question the permanence of this situation.

Jon’s existence provides a different take on the Sam-Lois feud. Not just in the fact that Sam has a role to play with his grandson, but the fact that the truth of Clark’s identity must certainly come out at some point. It felt like it might at some point during this issue, but as always, Superman finds another way…. Jon is positive addition to the Superman mythos and presents different viewpoints and approaches for the main characters in all the various situations.

Nothing to see here, folks.

This is a great character focused issue that not only addressed a deeper moral dilemma in the humanity of Phantom Zone imprisonment, but the everyday relationships between family members. Those can be complex and multifaceted, but at the end of the day, Sam and Lois and father and daughter and that should override everything else. They can find a way. This issue stands well on its own and is a perfect emotional lead in to next issue’s anniversary spectacular 80 years in the making- Action Comics #1000!