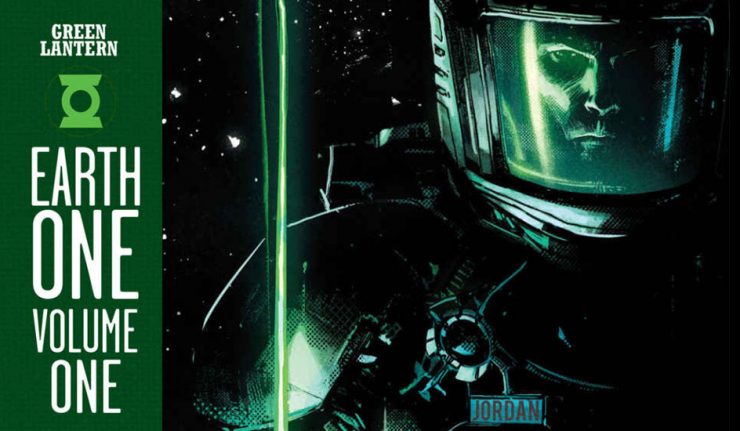 Hal Jordan joined NASA due to a yearning for discovery and adventure. But eventually space exploration becomes privately funded and Hal takes a job with Ferris Galactic mining asteroids, a job he doesn’t even want, just so he can stay in space and away from Earth.

Just as their latest job is cancelled, Hal and Volkov, a fellow employee of Ferris Galactic, discover a crashed spaceship on the asteroid. On the ship they discover it belonged to the alien, Abin Sur, a member of the intergalactic space police force known as the Green Lantern Corps. But they also discover a de-activated Manhunter robot.

Hal and Volkov return to their ship, but Volkov takes the Lantern and Ring that they found with Abin Sur. On board the ship, Volkov inadvertently destroys the ship with the ring. Hal Jordan gets the ring from Volkov and soon finds himself floating in space but unharmed and breathing.  Until the Manhunter is re-activated and attacks him. Barely surviving the battle, Hal is rendered unconscious.

He wakes up and finds himself on the alien planet Bolovax Vik. The ring sent out a signal that led Kilowog to his rescue.

The two share notes and discover that the Green Lantern Corps doesn’t exist anymore. Most of what has happened to the Corps, Oa and the Guardians is lost in history. Now only rumor and folk tales give any insight.

Manhunters arrive and attack Bolovax Vik. Kilowog and Hal flee across the galaxy to find others who have rings and maybe together they can retake Bolovax.

Along the way they discover the truth as to what happened to the Green Lantern Corps, Oa and the Guardians of the Universe.  They also learn where the Manhunters came from and what their true, dark mission is.

Just as Tom King did with Omega Men, this re-imagined vision of Green Lantern truly embraces the science fiction aspect of Green Lantern that makes it great.  From the beginning you get a sense that this could take place in the universe established in the 1979 Ridley Scott film Alien or even the 1968 Stanley Kubrick film 2001: A Space Odyssey.  It quickly builds into a galaxy-jumping adventure similar to Star Wars or Star Trek.

Considering Hal Jordan is my favorite super-hero, I went in skeptical of the changes that might be made since it is an Earth One title. But Bechko and Hardman stay true to the essence of Green Lantern without being married to the mythology. They explore ideas such as the Green Lantern Corps being folk tales of the past, or the possibility that anyone can wield a ring.

As good as the book is, like anything else it has its negatives. For some, the fact that this version of Hal Jordan isn’t an arrogant showboat might be viewed as a good thing. But for me I still prefer the Hal in the ongoing series Hal Jordan and The Green Lantern Corps. I like his arrogance. I like that he completely lacks the ability to consider the consequences to his actions. These things give him character.

I’m not saying they needed to make him the same type of character, but I do feel they could’ve given him more of a unique personality than they did.  Something that gives him character so that the reader either loves him or hates him. As of now he feels too neutral.  I’m hoping there is a sequel book and we get the chance to dive more into his character.

If you go in expecting this to be the same Hal Jordan we’ve come to know, then you may be disappointed. But if you go in knowing this is an Earth One book and that things are supposed to be different, or even if you have never read a Green Lantern book in your life, then I feel you will enjoy this book.  I also think anyone that isn’t particularly fond of superheroes but really likes science fiction stories should consider taking a look at this book.

Bechko and Hardman have crafted a universe that has me excited to see what a Volume 2 could look like. With such a vast mythology to alter and play with I’d love to see what they can do with the rest of it, especially with Sinestro. 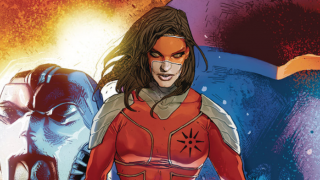 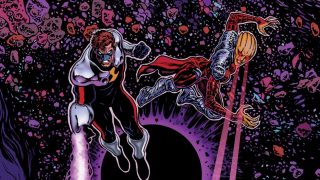