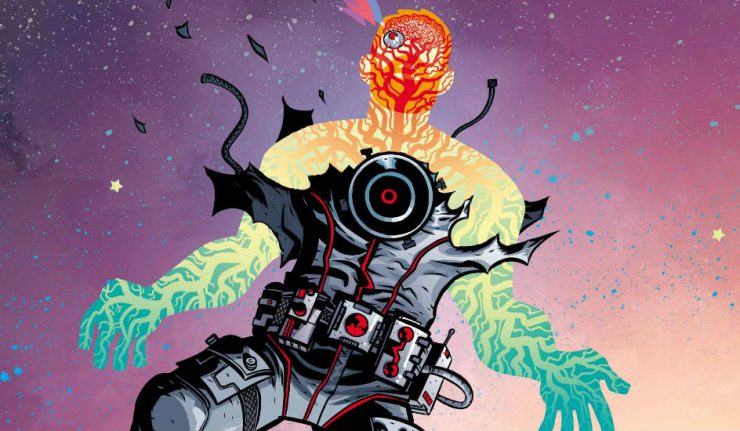 Cave, Chloe and Dr. Marc Bartow (the one from the other timeline) have left Earth and are headed to the abode of an old friend of Cave’s.  This friend is Star Adam, a rock and roll star from the past who upon eating the Muldroog’s Night Pudding came to understand he was an extraterrestrial and his future lay in outer space.  Or, at least, he was tired of what he was doing.

Cave is feeling bad about having lost contact with friends over the years, and Star is the person he’s chosen to track down.  Star reveals that he’s going to die soon, and like any star he will implode.  He suggests a final romp with Cave’s team and they all board a ship Star has already acquired.  It’s not long before they are in outer space and Star is space walking, in a way only he can with Chloe.  However, it isn’t long before Star realizes that his moment has come and dies.  Chloe hurries back to Cave to break the news, and Cave immediately realizes that Star’s forthcoming implosion will cause a devastating cosmic event.  With the help of his Interstellar Eye, Cave and the team make it back home through a dimensional shard.  However, everything is not well as the Eye announces the apparent  impending destruction of the Earth!

This issue also features a short back up story in the form of Chloe and Cave doing a podcast.  It fills in some gaps from Cave Carson Has A Cybernetic Eye that were never filled as well as giving some deeper history of Cave’s original team.

Cave and Chloe’s bonding was the strength of Cave Carson Has A Cybernetic Eye.  That remains established here.  Michael Avon Oeming’s art maintains the familiarity of this new take that links it with the previous series.  A few Kirby inspired images are a welcome treat.

The short back up story is not only fun in content, but appreciated as a loose ends wrap up.  The next installment promises to shed even more light on Cave’s history.

Whereas the first issue of Cave Carson Has A Cybernetic Eye had a very natural entry point for readers, a father and daughter dealing with the death of the mother and learning about each other, this first issue is difficult.  There are a number of similar elements with the theme of exploration of unknown worlds, there is a heaviness to it.  Additionally, what exactly is Chloe smoking? It wasn’t easy to tell. The Night Pudding metaphor for a psychedelic drug had a different connotation in its presentation this issue than in it’s introduction in the previous series.  Some clarity might have made changed this perception.

Despite dealing with some serious concerns, previously, Cave always had a lightness to his character.  In this first issue, it seems as if his heart is very heavy and what should be straight up wacky fun is muddled.

If you thought Cave Carson Has A Cybernetic Eye was psychedelic and trippy, you ain’t seen nothing yet!  This first issue is a uneven in tone and content.  Where it should be fun it feels tempered by a darkness.  The short back up story comes across better than the main tale.