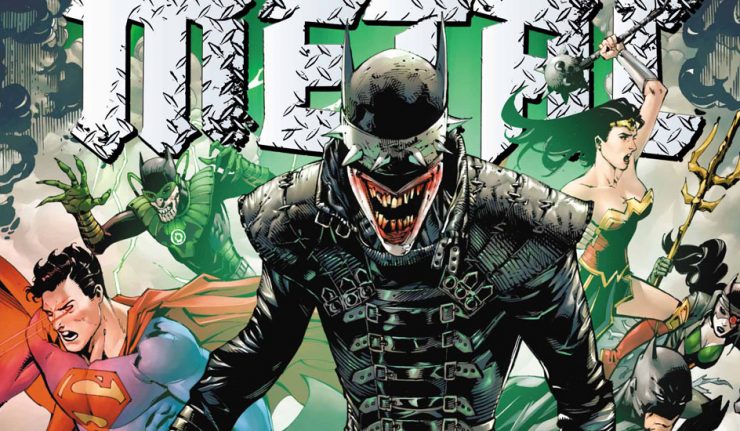 Wonder Woman and Hawkgirl charge in to save the League but they still can’t find Superman or Batman. The Justice League attacks Barbatos as Wonder Woman goes alone into the darkness.

The League are overwhelmed by Barbatos until Wonder Woman, Batman and Superman return in armor made of 10th metal.

The League, Hawkman, Hawkgirl and others fight the climactic battle to save Earth from the darkness.

Like previous issues, this issue is ripe with Easter eggs, cameos and nods to DC’s long history. But the two things that really stand out in this issue are the Joker and the possibilities the book leaves us with.

The Joker is the standout in this issue. His appearance is not only unexpected but also leaves the reader rooting for the Joker.

Even though the series has a clear ending, the way it ends opens the door to endless possibilities going forward in the DC Universe. While Crisis on Infinite Earths took the DC Universe to a single Universe, Dark Nights: Metal has expanded it.

This mini-series started with a lot of hype and energy and the first few issues felt like it was going to live up to it. But between the delays and one-shots that had no actual impact on the overall storyline it felt as if this event was just drawn out too long. To be fair, some of the one-shots were very entertaining, but none of them were relevant to the main storyline.

As for this issue specifically, the final battle felt somewhat anti-climactic and that Barbatos was never really that big of a threat.

The mini-series started out strong, but unfortunately fizzled out along the way. But I think the bigger concern is that this book is meant for DC fans that know DC in and out. I understood all the references but the casual reader may be lost. So as a long time fan it’s nice to have something like this, but it may not be the best jumping on point for new readers.

That being said, there are some truly great moments in this mini-series and in this issue. The ending sets up endless possibilities for the DC Universe as a whole and I look forward to seeing what happens next.