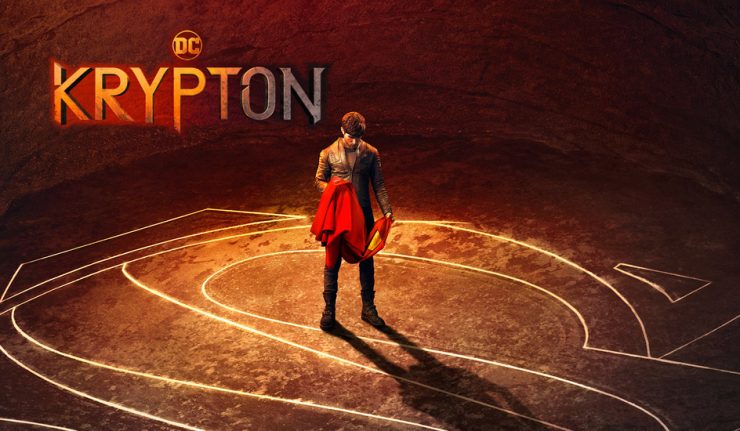 It begins with Val-El, grandfather of Seg-El (and Superman’s great, great grandfather), on trial for treason. When he is found guilty by the corrupt government, he is sentenced to death and all th remaining members of the House of El are stripped of their title and privileges.

Fourteen years go by and as Seg-El grows up in slums Krypton he also learns to fight. While vising his father at the Lawmakers Guild, he ends up preventing a terrorist attack and saving everyone, even unintentionally saving Chief Magistrate Daron-Vex, the man who sentenced Val-El to death and stripped the House of El of their title. This good deed leads Daron-Vex to arrange a marriage between Seg-El and his daughter Nyssa Vex.

Later Seg-El is approached by Adam Strange of Earth, who tells him to find the Fortress of Solitude, then disappears. When Seg tells his mother, Charys, she makes up her mind to tell Seg the truth.

When Seg gets into trouble again his mother rescues him and takes him to the hidden Fortress. There he realizes whatever his grandfather died for was hidden within the fortress.

When they return Charys is arrested and taken before the council just as Val-El was years ago.

This episode quickly paints a clear picture of the type of corrupt government that is present on Krypton while developing a potentially great character with Seg-El.

The special effects and production design is beautiful and could easily give any big-budget Hollywood film a run for its money.

But the crowning achievement is the glimpse of Brainiac. He isn’t on the screen very long at all, but he already appears to be what every DC comic fan have ever wanted to see with the character on screen.

It’s too early to tell what could be a negative for the show overall, but this episode is done very well. The only negatives would be nitpicking such as the way the Kryptonians speak. They have English accents and use slang words from Earth. They could’ve easily used some creativity and created some lingo for Krypton.

Adam Strange is a bit of a mystery to me. Strange isn’t commonly associated with time travel, so I wonder why they chose him. My only answer is Rip Hunter is already being used on DC’s Legends of Tomorrow and Booster Gold may soon have a feature film in development. But since they are using him, I hope we see him suit up at some point.

Great start to what looks to be a potentially epic series and I look forward to seeing how these progresses. I think viewers that don’t like superheroes may also appreciate the shows science fiction element.