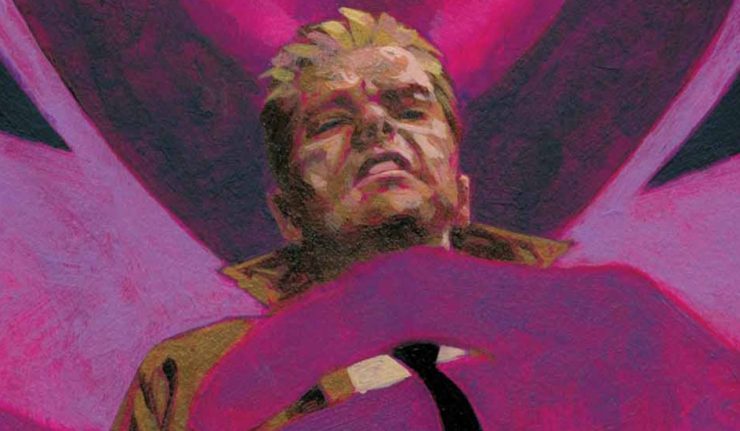 Constantine tries to save Margaret from possession while the Huntress tries to kill her.

The cover by Tim Seeley and Chris Sotomayor is cool. I love the Huntress’ shadow looming over Constantine. That looks great.

The interior art features pencils by Davide Fabbri, inks by Christian Dalla Vecchia and colors by Carrie Strachan. They do solid work. The characters are expressive and distinct. One thing I really appreciate is how the naked bodies of Margaret and Constantine are drawn. Burke, in Margaret’s body, is walking around mostly naked at the beginning of the issue. But it’s drawn or framed in a way that is gratuitous and that’s nice. We also see Constantine naked and he looks terrible. I mean that in a good way; he looks sick. His ribs are sticking out and he is really thin. I like that a lot.

This is the first issue of Hellblazer Rebirth that really has tension and stakes. In the previous issues I’ve reviewed, I was usually bored and had a hard time getting investing. This story is really working for me. Margaret’s possession is legitimately scary and sad. Burke just walking around naked displays how invasion and creepy the situation is. And it isn’t some great evil possessing her like the Huntress thinks. That would be a little generic; it’s some punk.

I love the idea that Constantine’s affect on her was to weaken her moral. She was a lot easier to possess because of how damaged her soul is. That’s an interesting idea and I like the guilt that places on Constantine.

My only gripe is that Huntress is a little too stupid. Someone told her a great evil possessed Margaret to end the world and Helena immediately bought it and charged in with crossbows blazing. Helena has to be smarter than that. I feel like she would investigate a little more. She’s a little too crazy and violent here.

This is a great issue; it’s the first one that I’ve genuinely enjoyed. The story puts the characters in an interesting place that I like. There is legitimate tension and I care about what’s happening to these characters. The art is solid especially on the character models and how they’re framed. This is part of a really good Constantine and I’m excited to see where it goes.