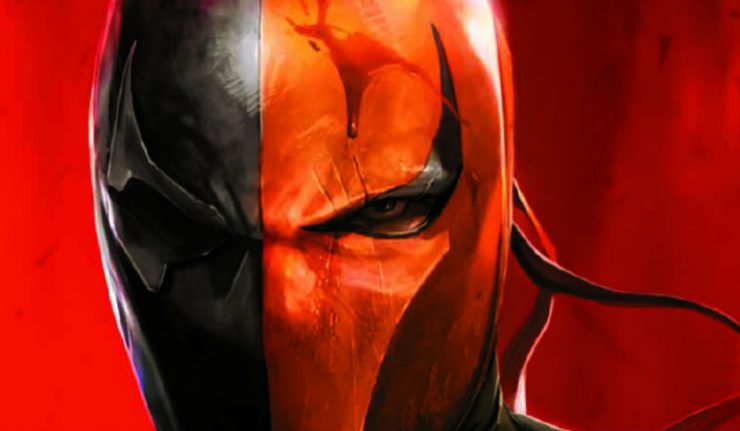 When Batman receives a message containing a DNA test for Damian and Slade Wilson aka Deathstroke, the Dark Knight goes on a search for answers! It seems that Slade instead of Batman may be Damian’s father, but is the test real? And if it’s not–then who’s trying to manipulate Batman and Deathstroke?

This book was a great read from beginning to end. Priest starts us off with two supporting characters that I had no idea even knew each other–Alfred Pennyworth and Wintergreen–Slade’s associate. The two are having drinks in a bar exchanging the doubts they have for both of their friends–names nonexistent of course. Both lament in how Batman and Deathstroke are constantly pushing their limits and teetering to the dark side of things. It’s Alfred that notes that it’s men like him and Wintergreen that keep men like Batman and Deathstroke walking that thin line. It was a great way to show the differences, yet the similarities between the two characters.

My only complaint about this issue is the DNA test itself. Damian has been through so much ever since taking the Robin mantle, and he’s done nothing but grow and improve since. At first I regarded him a somewhat an irritation, now however I see that his harshness is a reflection of a need to feel adequate to Batman. He’s like Bruce in a lot of ways, and I’d hate to see years of character development wiped away with the realization that Deathstroke is his father. Priest does a wonderful job f showing how concerned Batman is with the results. He encounters Deathstroke and a brutal fight ensues, with Batman telling Deathstroke that he should find out if the results are true. Slade isn’t interested citing that Batman is the boy’s father and nothing else, noting that the DNA test is a fake. Batman still isn’t buying it though and although he acts as if it’s about the case, it’s really about finding out the results of his son Damian.

I thought that Deathstroke #30 was a good read and I’m excited to see how the next issue plays out. It seems that Batman and Deathstroke may be joining forces, but who exactly would benefit from that? Priest gives you very few answers, but leaves you asking so many questions–and it’s perfect.