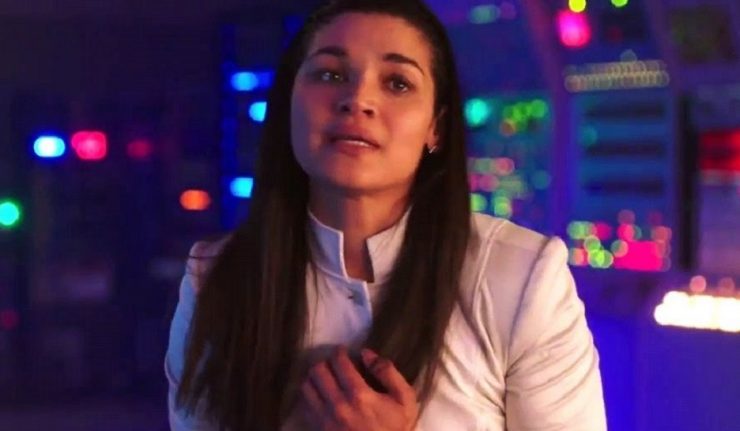 Team Flash and Gypsy team up to stop the latest phase in The Thinker’s plan while Cisco and Gypsy discuss their relationship.

What works in this episode is that for once Barry Allen takes a backseat in the main plots and we get to see some of Marlize’s backstory that led to both her falling under DeVoe’s sway and what ultimately gave her the strength to break away. But more on that later. For now, I want to focus on the parallel between Cisco‘s dilemma in his relationship with Gypsy and how it mirrors that of the main antagonist. Cisco wants to be a part of his girlfriend’s life, but the fact that realizing that goal means leaving team flash, his surrogate family, causes conflict. Every couple goes through this, trying to balance both their respective careers and their personal lives, especially when the careers take them in opposite directions. Cisco would never ask Cynthia to leave her career to be with him, and vice versa.

So here is the stalemate that ultimately dooms their long-distance relationship. Cisco wants more, but Cynthia’s job won’t allow it, and their present situation is intolerable to both. What works is that it’s a mutual split as opposed to Cisco or Cynthia storming off from each other. I think Gypsy almost losing her life in the final battle helped in that regard. They both realize they mean a lot to each other, even if their jobs keep each other apart. The way they parted leaves room for the possibility of reconciliation, and that is smart on the part of the writers. Jessica Camacho has managed to flesh out Gypsy into a very likeable character. Plus the fact that her dimension allows the chance for Barry to have an adventure with the accelerated man, who made that very brief cameo in the final scene.

Speaking of Barry, as we cannot have an episode without him, what he’s doing, although unrealistically, is trying to hold this family together. He’s trying to practice what he preaches in the first chapter of the episode. But the manner in which he goes about it is on the level of a meddling kid brother trying to get both parents to talk. From experience, I knew that it was in vain from the start. He very much has the role of an observer in this episode. What also works is that there is a good break from the Barry and Iris discussions that have dominated the season.

In the case of Harry Wells, as a man swiftly losing his intellect, what works for his story arc is finally a use for Cecile. What was once a gag for the series has become a relevant lifeline for Harry, as her ability to read minds gives his dying brain cells a voice that’s quick enough to be heard. It also links Harry and Cecile in a way because he has to lean on her for support. At the rate in which Harry’s intelligence is deteriorating because of his own actions, I highly doubt that he could’ve properly deduced the bulk of DeVoe’s mad scheme or conveyed it. It’s a clever way of making Harry feel included in the group as opposed to his sense of insecurity and loss of identity and role. I notice that Tom is injecting a lot of the characteristics from the doppelganger HR Wells into his portrayal. One minute he sounds logical and concise, and the next he sounds unfocused and confused. While he doesn’t have the fedora or drumstick-twirling habit, you find that both this version of Wells and the other version are not that distinct from each other.

Now, we come to the character of the long-suffering Marlize DeVoe a.k.a. The Mechanic. For the bulk of this season, she has been something of a mystery. What would attract a beautiful, opinionated and talented woman to someone like Clifford DeVoe? Moreover, what would attract a man like Clifford to a woman like Marlize? Further, what would make her believe so wholeheartedly at first in her husband’s vision of an enlightened planet? While we already covered Clifford DeVoe’s origin story, up till tonight we hadn’t had a look into Marlize’s background. You see immediately where the attraction comes from. She challenges Clifford and presents a logical counter argument. In Marlize, DeVoe has found his equal and you feel the same level of love and affection that Barry and Iris feel for each other in their relationship.

By revealing Marlize’s backstory, in the case of Clifford, you see the humanity that has been lost; this is a man who realizes how important this woman has become to him and that losing her felt like losing a part of himself. I believe that this moment on the phone could have compelled him to abandon his pursuits that drove Marlize away if not for that attack. His conveying to her both by phone and in person that he is nothing without her speaks volumes; I believe that her endorsement of his efforts is partly responsible for how far things have come and what’s happened. This was a flawed judgment call on her part spurred by tragedy and loss of faith and her beliefs. While she saw logic in what he wrote, she still held out hope for humanity without these extreme measures.

While we have seen her in combat with the team and, specifically, with Iris, we haven’t seen her witness her husband giving into brutality as he tried to strangle Gypsy with his abilities. In her eyes, he had overcompensated and became the very kind of disease that he at first sought to eradicate. He was willing to kill for a piece of technology, just as those people in South Africa were eight years ago, in order to acquire her water purification system. The repeated injury of that same arm drives home that lesson. In the end, she proves what he declares to be true: without The Mechanic, The Thinker is nothing. She drives home that lesson for the professor by using the technology she developed for her husband against him. DeVoe is so far gone that he cannot see the flaw in his vision. You cannot save or enlighten humanity by dulling it to the point of dependence. Instead of raising humanity up, his technology will lower it down and keep it there, even long after he’s dead. To be blunt, he’ll make humanity stupid and keep them stupid all to make him seem omnipotent and something of a deity after his passing. He’ll ensure none will question his logic or be smart enough to do so. That is megalomania of the highest order and perfectly encapsulates all you need to know about the character even if you haven’t been following this season.

Even a moment several episodes back showed that DeVoe got too big for his britches in his marriage as he said to an unconscious Marlize that she was nothing without him. A pathetic attempt to reclaim pride in his own ability. Excellent performances from both Neil and Kim in this regard. Sandilands’ portrayal of Pre-Thinker DeVoe and present day DeVoe are distinct enough in tone that you recognize the sympathetic, redemptive qualities that have long since been abandoned. The Thinker now views himself as an island complete unto himself – even relegating his once-beloved wife to the level of henchwoman – and he could not be more wrong. Whether or not he is able to catch up to his estranged wife riding his chair remains to be seen. Or if he feels that he is better off without her and can carry out his mission on his own. He is completely cerebral and only called her his love just to keep her in his thrall.

Finally, we get to see that the mystery woman that has been popping in and out of these episodes is a speedster herself and the fact that her lightning is both yellow AND purple – Iris’ color when she had Barry’s speed – Gives you a hint as to who she really is. And, as a plot device, she may be the wild card that The Thinker did not count on and the secret to bringing him down.

I’m not cool with the idea of Barry repeating a strategy that failed last season when you try to get everybody talking after flashpoint. Even Cynthia felt pushed into it, and Cisco felt like he was butting in as opposed to helping out. Although he’s human, I like to think that Allen is a learned individual who does not repeat the same mistakes. Or at least tries not to.

I wish we had a chance to see more of Cynthia’s dimension, and also more of the Accelerated Man beyond a few glimpses of him zipping in and out of frame. As for Caitlin, For a woman who is scientifically sound, she is becoming uncharacteristically more desperate to reclaim what she once perceived as an illness or a threat. I just don’t know how I feel about that.

Seeing Marlize stand up to her husband and cut him off was worth the wait. You could feel the heartstrings being pulled between Cisco and Cynthia in their break up and again, you get new hints as to the mystery woman’s identity. It’s just Barry acting like a poor man’s Dr. Phil again and Caitlin’s desperation to get frosty again that brings it down. 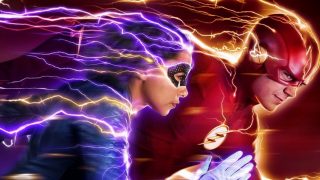 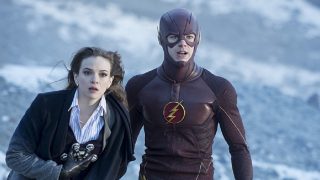