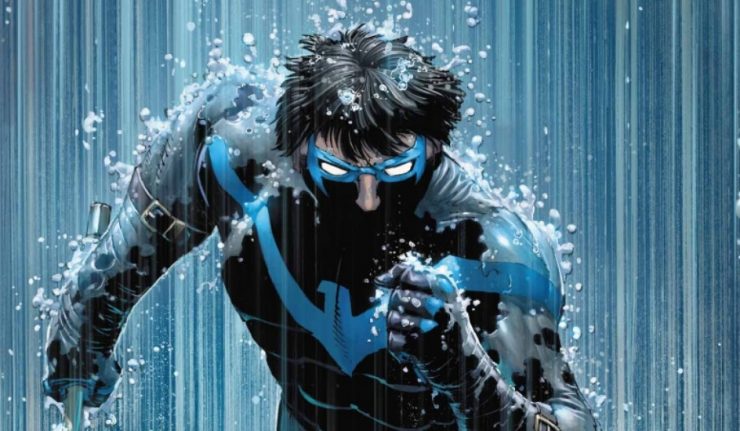 “THE BLEEDING EDGE: PART ONE” New creative team, new storyline, and an all-new era for Nightwing. I was very excited to hear that Benjamin Percy was taking over from Sam Humphries as the new full-time writer on Nightwing hot off his spectacular run on Green Arrow. I loved Mr. Percy’s take on the Emerald Archer, so was very keen to see how he’d handle the adventures of the Winged Wonder.

For me the whole premise of the dangers of technology is a striking one. We carry our phones everywhere! These devices are no longer just for emergencies, they’re almost an essential way of life. Heck, they’re not even just phones anymore. These gadgets are pocket computers, music players, portable TVs, Sat-Navs and communications hubs. In this issue writer Benjamin Percy posits the question: what if someone hacked and weaponized these everyday devices?

The answers are both thought provoking, and scary.

Mr. Percy’s script is complimented by some stellar art from Chris Mooneyham, and colorist Nick Filardi. I’ve always been a huge fan of comics veteran John Romita Jr. (who, as a massive coincidence, drew the beautiful alternate cover for this issue). Mr. Mooneyham’s art is right up my (crime) alley! His art is very “RomitaEsque”, yet different enough to make it distinctive.

While his tone is dark, and gritty, it is still exquisitely detailed and very easy to follow. Mister Filardi’s colors work brilliantly with Mooneyham’s art. The street light on Dick Grayson’s face on page one and the exploding smart phone on page two are two great examples.

While the idea of killer cellphones is truly inspired, the thought of virtual projections, for me, is bit of a stretch. Without giving too much away, this kind of tech would fit a sci-fi movie better than it does a Nightwing comic. But it’s a minor niggle, as I’m sure that Mr. Percy will explain how it all works and use this cutting-edge tech to our hero’s advantage at some point during this arc.

Overall this issue has me very excited about what’s yet to come. Ben Percy clearly knows Dick Grayson very well, as his handling of both Nightwing, and Barbara Gordon is totally spot-on. Look out for a brilliant conversation between Babs and Dick where she calls him out for acting like an old man in his seventies.

If Mr. Mooneyham can keep up this level of quality art on a two week release schedule, then I’ll be a very happy reader indeed.