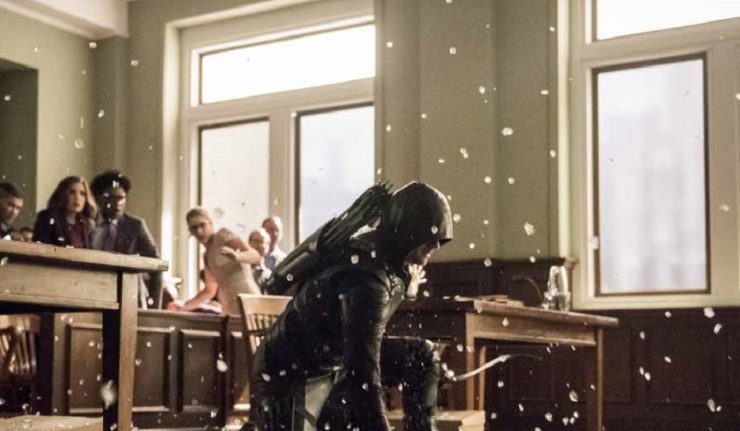 Synopsis: Trapped in a trial controlled by Diaz, Oliver is forced with the real possibility of prison until a face from his past intercedes to turn the tide.

Positives: This episode had the right amount of a sense of confinement for all parties involved. Ricardo Diaz holds all the cards: Police, media, the judge, and probably the prosecution. The trial is just for show; Oliver’s verdict is predetermined regardless of evidence. The writers go to lengths to get across to the viewer just how far-reaching The Dragon is, and that the trial is a formality to permanently remove Oliver Queen from the board. Stephen portrays restrained fury better than anyone, but he adds to his performance moments of weakness. He is even desperate enough to reveal his identity to his attorney in the vain hope that she can give him a strategy that doesn’t involve exposure or prison.

Verisimilitude is conveyed through his voiced desire to someday put that bow aside in favor of a normal, happy life with his family. Ollie knows there is an end to all things, including walking in two worlds. The inclusion of The Human Target – returning guest star Wil Traval – works in that he has already proven his skill set before on the show and it’s the perfect strategy you’d expect from Team Arrow. What no one expects before this revelation is the return of Tommy Merlyn. Oliver’s expression is perfectly believable and not overlayed. This is the face of a friend from childhood that he watched die right in front of him in that teary-eyed moment, the first time we’d seen him break down in season one. The fans felt the weight of guilt in Oliver over Tommy’s death in that moment in spite of the tension between them. Stephen brilliantly calls back the pain in that face. Desperation to protect their families is what links Oliver and Rene in this episode, as Wild Dog is again forced to bury Oliver to keep Diaz from harming his daughter. I was with John Diggle as he assaulted Diaz outside the courtroom; I was shocked and disgusted at the depths to which this underworld figure would go to see his ends met. However, this episode is also designed as the road to reconciliation and redemption in Rene’s life. Rene realizes that this mess began in late November when he sold Oliver out to the FBI to protect Zoe, which began the domino effect that disbanded Team Arrow and everything that happened afterwards. The fact that Oliver, knowing what Diaz was doing, gave Rene that subtle permission to do what he said for Zoe’s sake showed his former protégé that he still gave a damn.

In turn, that last-minute strategy with The Human Target after the Tommy Merlyn stint failed redeemed himself in Oliver’s eyes. That subtle meeting afterwards was what fans were waiting to see and demonstrated the producers listened to the backlash as to where things were headed with the characters. Another big redemption this episode was found in Laurel Lance. After weeks of being a willing lackey of Diaz’s just to survive, she finally stood up for herself by defying his wishes to bury Oliver on the stand. This is the culmination of months of her slow bonding with Quentin Lance. Her character has evolved; all season she has slapped her Earth-1 doppelganger’s legacy and character down, and, now challenged by her example, she rose to the occasion. What works is that Katie’s performance conveys a woman who is terrified yet masks it with the perfect poker face. It works so well that even when she does the right thing you have to wonder what’s going on behind those eyes and that smile. Her current predicament seems to be the first part in Diaz’s knee-jerk response to his failed agenda. The groundwork laid for Ricardo doesn’t require him to be front and center. Things are really heating up for the finale and the stakes are still very high. Oliver is still alone and has ways to go with regards to damage control. At the moment, the fractured teams convened to assist Oliver to be bigger than their petty differences. It remains to be seen whether his reconciliation with Rene is the first step for the rest of the group.

Negatives: The speedy nature of the trial has to give the public some sense that something is going on. No one knows about Ricardo Diaz as this criminal mastermind, but the level of suspicion is growing. Then there is the revelation that Oliver disclosed his true whereabouts for those five years declared dead. Why would Oliver not lie as he had for the past eight six years? And why would he confirm that both The Hood and Green Arrow are one and the same? The judge’s behaviour of overruling objections that were clearly warranted also makes it too obvious. And why is no one arresting Laurel Lance in accordance with the Anti-Vigilantism Act of 2017? And why did they not put Raisa on the stand? As someone who had worked for the Queen family for years and knew Oliver from boyhood – and clearly on his side – she’s the perfect character witness. Lastly, again, why didn’t anyone on Team Arrow reach out to Team Flash? Or were they respecting the current climate in Central City with Barry as a disgraced CSI still not allowed back at the CCPD to avoid suspicion?

Final Verdict: I give this a strong 5 out of 5 in spite of the flaws. My own “judgment notwithstanding the verdict,” as it were. This was the episode that fans had been waiting for. This felt like a step in the right direction towards reunification of both teams. What works for Marvel doesn’t work for DC, and I think you know where I’m going with that rationale. I’m pumped to see how the final episodes of the season will unfold for Oliver and the future of both Star City and Green Arrow.