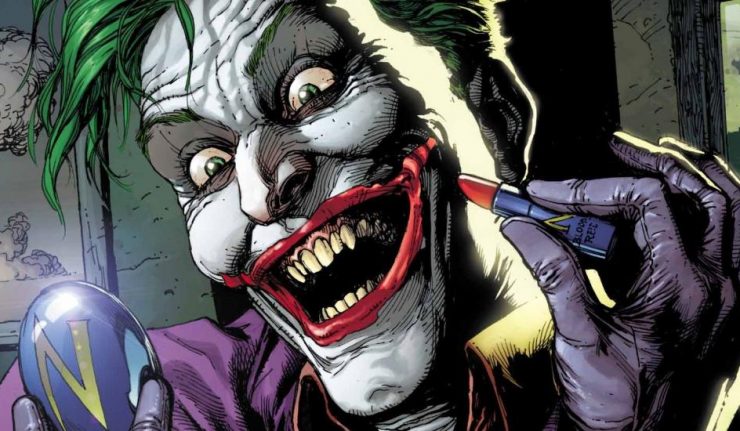 The Comedian lives! The Mime and Marionette loose in Gotham City! Rorschach is locked in the bowels of Arkham Asylum! Secrets will be revealed as the Doomsday Clock ticks on…

We have been told that when Doomsday Clock ends, that it will sync up with the regular DCU titles, which means that things we see in this series will represent the near future of the DC Universe. If so, it appears that DC’s continuity at the end of Doomsday Clock will very strongly resemble the pre-Flashpoint DCU.

For example, Russia’s metahumans look nearly identical to their pre-Flashpoint versions, especially Red Star, Lady Flash, and Negative Woman. Whether they have the same histories, however, is yet to be told.

Pozhar is an especially interesting case. Mikhail Arkadin isn’t sporting his original look as Pozhar, but rather the look he had when fused with Ronnie Raymond as Firestorm.

The extra materials in the back also give us some tidbits about the future of some of DC’s international groups. For one thing, it looks like the Justice League of China is fated to be absorbed into the Great Ten, making it the Great Twenty. And Markovia has its own team of Outsiders, which makes me wonder how that will tie in with the hint dropped in No Justice that Black Lightning will be involved with a team who “can keep us covered from the outside.”

Also interesting is Black Adam’s return to being the ruler of the fictional Middle East country of Kahndaq as he was pre-Flashpoint. Considering that Doomsday Clock is apparently returning the JSA to DC continuity, will it also be restoring Black Adam’s history as member of the modern-day JSA?

Speaking of the Justice Society, Johnny Thunder manages to break free of the seniors home holding him captive and makes his way to the All-American Steel factory, where he finds Alan Scott’s magic lantern. While there, he also meets up with Saturn Girl and Rorschach. Perhaps together, the three can undo whatever happened to erase the JSA from history.

And it was great to finally see Batman and Adrian Veidt coming face to face. Both are their respective world’s representation of human perfection in mind and body. Unfortunately, we don’t get to see a full battle between the two.

And then there is Luthor’s revelation that the person who is reportedly creating metahumans for the US government was at some point a member of the Justice League – which narrows it down to a couple hundred or so suspects. Also, since it has been hinted that Doctor Manhattan may be also be posing as one of Earth’s superhumans, could they be the same person?

The only real negative aspect of this series is its problems keeping on schedule. First the series was moved from monthly to bimonthly, then this issue was rescheduled from May to June. It did get moved back to May again, but I have seen some unrest amongst readers in various forums. Some are claiming that after all the delays, they are losing interest in how the story turns out.

For myself, I will stick with the series, regardless of how long it takes to come to a conclusions, but DC might want to look at ways to keep readers interested in the story during the long wait between issues. Perhaps a tie-in miniseries or a Director’s Cut special like Mister Miracle had when they were hit with a delayed issue?

Delays or not, the story is captivating and pure fan service for those who miss the pre-Flashpoint DCU. A lot is yet to be revealed about how the DC Universe will look at the end of the series, but the story of how it gets there is proving to be an amazing one.