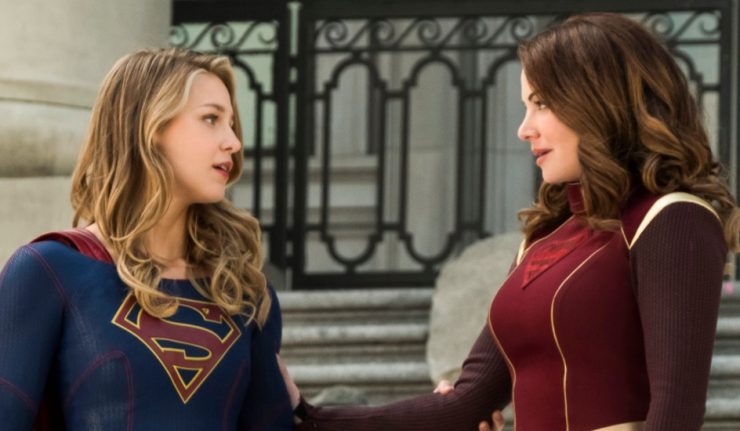 Team Supergirl and the Legion of Superheroes confront Reign and the Dark Kryptonians.

Thankfully, the terraforming is fixed easily and quickly. The plan to create New Krypton is stopped before the title even comes up which was a huge relief. The stakes of the episode rely on the personal conflicts and not the generic end of the world stuff.

There’s an optimistic sense of change by the end of the episode. Several characters are leaving and there are major status quo changes. It’s sad to lose these characters but it could lead to an interesting new season. Change can be simultaneously scary and exhilarating; the episode conveys this well.

There’s a time travel element that is strange. Supergirl kills Reign which results in the deaths of Allura, Sam and Mon-El. Kara turns back time so that she can choose to capture Reign which saves everyone. There is geeky stuff to nitpick about this scene such as how time travel in this continuity works differently in each show. I don’t really care about that; I just don’t like the idea of the scene. It’s hard to have any kind of tension when there is an easy story device to turn back time. As long as Kara has the Legion ring, which Mon-El gives her at the end, she can travel through time with little effort. I can’t feel the stakes if I know that they can be easily reversed.

Additionally, the execution of this scene is bizarre. The idea is that the morally right thing to do is capture Reign. I can get on board with that but the show treats it like this something Kara had to learn. Supergirl and Imra had the exact same argument about Pestilence; Kara had the same belief then. It doesn’t feel like character growth so much as Kara forgot her ideals for two minutes.

Speaking of Reign, she is a disappointment. At the end of the day, she’s a thug. Reign has no goals or ideology; she isn’t a character. She is practically Doomsday with a good vocabulary and I felt the season was promising more than that.

This is a weird episode. Emotionally, it resonates. One feels everything that the writers intend. There is something satisfying about it; maybe it’s because I’m so invested in the characters especially Kara. It might be easier to ignore my issues with it because I do have a strong emotional connection to the people I’m watching. But it’s hard not to be disappointed at how wasted the villains feel. I loved a lot of what the season did to set this conflict up but it ultimately led to nothing. There was a lot of potential here but it gets lost in the mix.