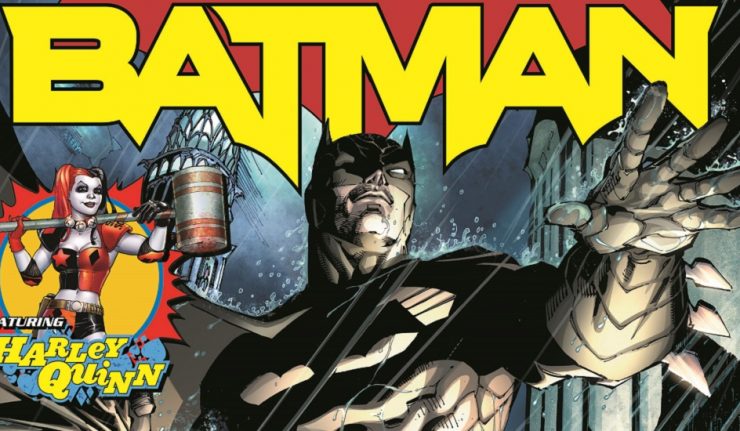 Batman is on the case of a missing girl in “One More Chance,” an all-new story by writer Jimmy Palmiotti and artist Patrick “Patch” Zircher. Batman is the world’s greatest detective, but what happens when the trail in his newest case leads him back to a place from his past that he never expected to revisit?

Out of all four of these Walmart exclusive giant-sized issues, Batman Giant #1 has definitely been my favorite, followed by Superman Giant #1.  This new story is perfect for first time readers, as it gives a complete sense of who the character of Batman really is and how he operates.  You get a feel for his relationships with Commissioner Gordon and Alfred, two of the most important people in his life and the two who have probably had the most impact on who he is today.

We also saw him truly earn the moniker of “the World’s Greatest Detective”, something that the comics have always been able to achieve, but that the films have had issues with.  His ability to see patterns and predict people’s actions is on par with almost no one, and seeing it used here is one of my favorite things in this entire issue.  Batman doesn’t always need to run around Gotham kicking criminals’ faces in, sometimes I just want to see him use his profound intellect to outsmart the bad guys.  I find that to be far more impressive.

Another thing I loved about this issue is something that longtime readers may be sick of, and that’s seeing the death of Bruce’s parents retold.  For those of us who have been reading comics for years, this is common knowledge, and may be something that some are sick of revisiting, but as these giant-sized books are meant to draw in new readers, I think it was smart to include it.  This allows those new readers to understand Batman without having to go back and read a bunch of other issues.  Now they can move forward and dive deeper into his mythology.  And that’s where the next story in this book comes into play.

As I’ve said in my other reviews, I love that DC decided to pair the new stories with another story featuring the character(s) in the new one.  This time we get the first issue in one of my favorite Batman stories of all time – BATMAN: HUSH!  I think this was a fantastic choice as it introduces readers to one of the essential DC storylines, and allows them to experience it the way we did back when it first came out in 2002.  And along with that, we got two other books in the world of the Dark Knight, both hailing from the New 52 era – Nightwing #1 and Harley Quinn #1.  These are both great series and fit perfectly in this book as they give the reader a little something different to read while keeping them in the realm of Batman.

The last thing I want to talk about in this section is the gorgeous artwork by Patch Zircher and John Kalisz.  Comic book art is one of my passions, so whenever I find a book that has beautiful art, I’m more inclined to give it a shot, and this definitely falls into that category.  Everything from the characters to the magnificent backdrops, mixed with Palmiotti’s superb writing, has made this a fantastic story that everyone should check out.

The only negative I was able to come up with for this issue isn’t even one specific to this story, but instead one that happens in pretty much all Batman stories, and that’s when Batman talks to Alfred, in front of a criminal, and uses Alfred’s real name.  I always feel like it wouldn’t be all that difficult to piece it together and discover who Batman really is, yet he always seems to do this.

Overall, this was a fantastic issue, and even with that minor “negative”, it holds up as my favorite of all the new giant-sized issues.  And along with a selection of three other great books, Batman Giant #1 is something that all readers, new and old, definitely need to pick up!