The Bat-Wedding at Gotham Central Comics 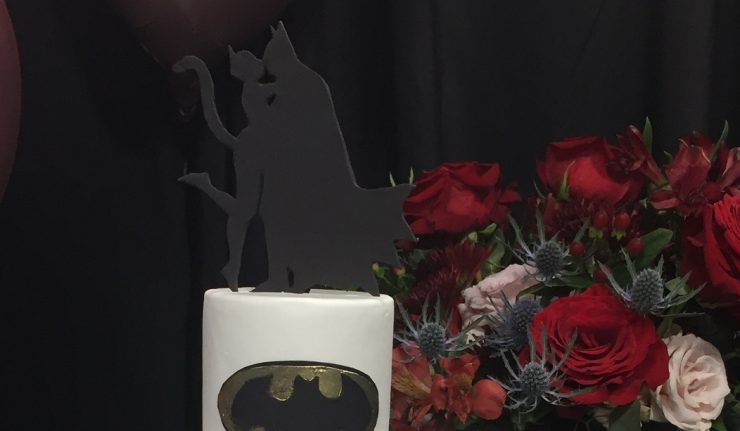 Spoilers ahead if you haven’t read Batman #50!

The Bat, The Cat, and The Clown. That’s what the Fourth of July promised at Gotham Central Comics to commemorate the (almost) wedding of Bruce Wayne and Selina Kyle in Batman #50.

Located on 1400 Aimco Blvd, amidst its spectacular array of comics and collectibles, the store not only commissioned a two-tier wedding cake for the event but had converted their candy store section into a chapel worthy of the Caped Crusader: A large back curtain behind the altar with the bat logo hanging atop of it. The cake itself was white and had an edible silhouette of Batman and Catwoman at the top.

With a dozen in attendance – with Robin, Poison Ivy, Joker, and Zatanna cosplayers – the Dark Knight was fashionably late for his nuptials, but that doesn’t mean there wasn’t an attraction to kick off the celebration. Besides the sultry Catwoman herself that smiled and mingled and posed for pictures while waiting, that is.

Superstar artist Ken Lashley was on hand to sign autographs, do sketch covers, and sell his commemorative 11 x 17” pinup he had created of the bride and groom.

“When they came to me and asked me to do it, I said ‘Whoa,’ Ken recalls. “But it’s not a marriage print; it’s more like a love print, you know? They do have affection. [You] just gotta have fun with it, right?” Featuring Batman and Catwoman in an embrace with both heroes and villains in attendance, the print came in both black and white and color variants, as well as steel and aluminum formats.

A half hour into the scheduled event, the announcement of Batman’s arrival was given, accompanied by the epic Tim Burton score from the 1989 Batman film. The Boy Wonder led his towering mentor to the altar, where the Heath Ledger version of The Joker awaited to officiate. Then, Robin pulled double duty by escorting Selina down the aisle, surrounded by shelves of candy and framed comic art. Fumbling through a hilariously-disorganized sermon on marriage – and a failed attempt at discovering certain secret identities – The Joker got down to business. One of his stooges in a white mask read a more detailed sermon on love and marriage, capping it off by being tasered in the back by his boss.

When it came to the actual exchange of vows, however, while Batman said “I Do,” Selina went off script. She began a tale of how her grandmother had saved her a wedding gown for her when she had found her soul mate. However, the touching, sentimental tale took a tragic turn when she revealed that her grandmother had been killed during a battle between Batman and Joker.

Openly blaming Batman for her grandmother’s death – a revelation she, herself, had recently discovered – she declared, “I can no longer look you in the eye. This is not meant to be. Goodbye, Bruce.” With that, she stormed off amidst disbelief and shock. Even the Clown Prince of Crime was shocked, quipping, “Honestly? Honestly? Honestly? It was a yes or no answer. That went on forever! After a moment of posing stoically while his nemesis tried to coerce the indulgence of the wedding cake, Batman recovered and put Joker’s hands behind his back and led him away. When a reporter made a disgusted expression, the clown quipped “We’re not getting married!”

Still, the cake was delicious, and there was even a second chocolate variant graciously made for Gotham Central.