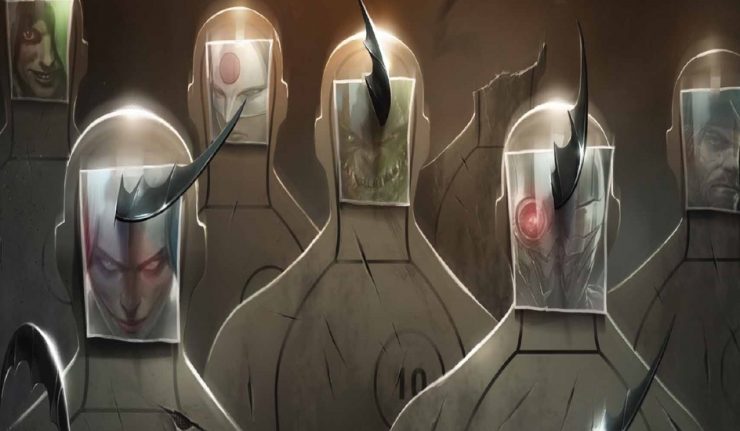 Guest-starring Batman! The noose tightens on the Squad in part four of “Constriction,” and someone may be dancing at the end of a rope before it’s all said and done. The murderous Kobra is looking to put the squeeze on Deadshot’s daughter, Zoe. Even with the Dark Knight’s backup, will the Squad be ready for Kobra’s bait-and-switch?

The finale to the “Constriction” arc did not disappoint. With Batman and Deadshot reaching the climactic end of the quest to retrieve Lawton’s daughter, we were greeted with some great homages and visionary moments. Some of the best moments of the entire book are the moments picking up after the last issue ends with Batman and Deadshot plunging into the cavern below to what could be a watery grave. Deadshot is weighed down by his armor as he internally contemplates what it truly means to be a hero. His armor, the suit designed to keep him safe, is now killing him, which is a great symbolic moment that illustrates Floyd’s character and his every day struggle between keeping his mercenary ways or shedding the weight of iron that covers him and opening up to being a father and hero.

Batman quickly rushes to Lawton, but instead of saving him, rips the armor off his body, to which Deadshot now has the tools to save himself. This is a great way of using Batman not as the savoir, but instead allowing Deadshot to learn who he is and save himself. The comic had a lot of imagery that was a welcomed sight breathing fresh new life to Suicide Squad. While batman did take a back seat, visually a lot of the shots he was involved in where call backs to a pre-Flashpoint style, similar to how Deadshot also sported a look very similar to his early debut days with the team.

The ending had some great emotional moments, especially Batman stepping in to stop a mourning Zoe Lawton from turning into the next Deadshot. The book felt a lot more like a Suicide Squad comic and not a Batman take over. It was a great way to finish off a strong arc.

It’s always been said a hero is only as good as their villain, and while Burr returning did have its cool moments, especially when taking over Deadshot’s body, he really did not feel like a worthy advisory for the squad. The argument could be made that the true villain of the arc was Deadshot’s neglect as a father and his hubris, however a real adversary should’ve been put up against the group, considering Batman joining the fray.

Overall, the book was a great read and a great conclusion to an arc that was extremely layered and symbolic. Batman taking over the group was a bit overshadowing, but I do hope the squad can bring in guests in the future that balance the team out and give stories new perspectives. I also hope the team goes on a few solo missions and truly showcase the skills that brought them together and hope Lawton won’t be sidelined too long.